This week has been under the sign of spring!  With temperatures of up to 25 degrees I’ve been heading for the garden as much as possible.  One of the many jobs waiting to be accomplished is pruning.  Look at the tangled mass of branches in the picture – that’s one of the three kiwi vin 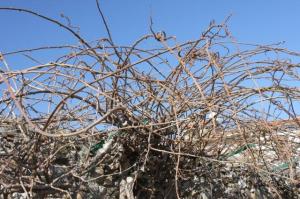 es in my potager, and it needs a good haircut!  Cyril from Domaine La Madura has lent me his electric secateurs and that makes the task less painful (blisters!) and much faster.  After five years of pruning the kiwis I’m still not entirely sure if I’m pruning out the right canes, but so far there’s been fruit each year!  My table grapes are also pruned already – I’m always amazed when I look at the cut glistening with sap, in some cases positively dripping.   (Continued after the photographs) –>

At the beginning of the week I decided to buy my seed potatoes to get them sprouted ready for planting.  On the way to Beziers the countryside was ablaze with trees blooming their hearts out – white, pink, some already leafing out, and others with flowers on bare branches.  It always gladdens my heart to see all that blossom!  With the good weather the cauliflowers I planted last October have come one very rapidly, and we’ve started eating them – cauliflower cheese, cauliflower soup, cauliflower with pasta, cauliflower on its own….  When it’s really fresh the flavour is absolutely superb, and it cooks in next to no time.  I will dig out Jane Grigson’s vegetable book for a few more ideas of what to do – there are four more heads in the garden to be picked!   Any suggestions??

2 thoughts on “Spring is on the way?”