Jim and Bibi Brown recently spent a week staying at Les Rossingols near Roquebrun – here’s their version of the area!  Thank you to Jim for allowing me to share this with you.

Languedoc-Roussillon is a region of southern France that lies between the base of the Massif Central and the Pyrenees. It is bordered on the east by the Mediterranean and was once also part of Catalonia. The Catalan influence remains strong to this day in and around Perpignan and along the coast. Languedoc-Roussillon was once the center of the Cathar sect. Numerous churches are spread throughout the region. 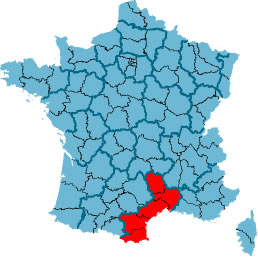 The gîte that we rented about an hour south of Montpellier, the largest city in Languedoc and just west of Béziers, was situated near the small country village of Roquebrun. “Les Rossignols” (The Nightingales), as the house was called, was at the end of a 3 km narrow lane that ran parallel to the Orb River. 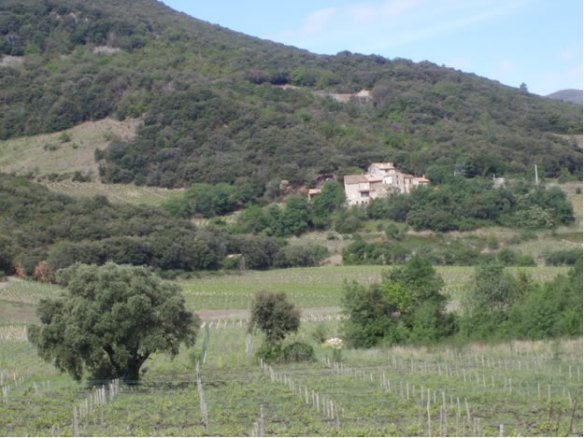 This was our first glimpse of “Les Rossignols” as we approached from the village. It was appropriately named: the nightingales sang 24/24.

The Languedoc region is known as la mer des vignes (the sea of vines). It is the largest wine growing region in France. The entire valley and plain are covered with vines.

The vineyard above spread from east to west just below our gîte. The plants are still young at this time of the year.

The village of Roquebrun is built on the side of a mountain overlooking the Orb River. It has a population of about 500 people many of whom are involved in the wine industry. Apart from that it is known as a center for outdoor sports like kayaking and canoeing, mountain and road biking, hiking and equestrianism. 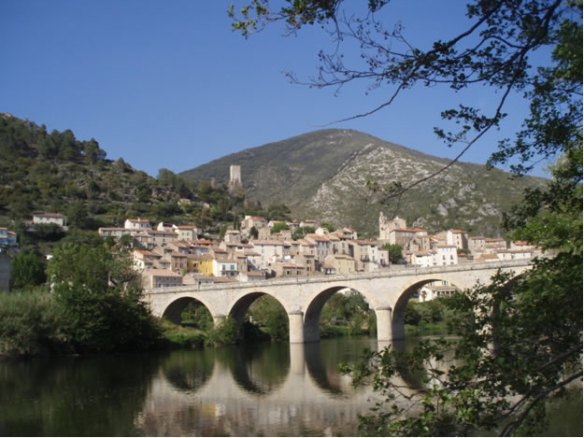 The tower dates back to 908. The village is actually located in the National Park of High Languedoc. To the west of the village lie the Espinouse mountains; to the east the plain of Languedoc spreads eastward to the Mediterranean and south to the Pyrenees.

At the center and crossroads of the village local life is carried on at the town’s only major café: 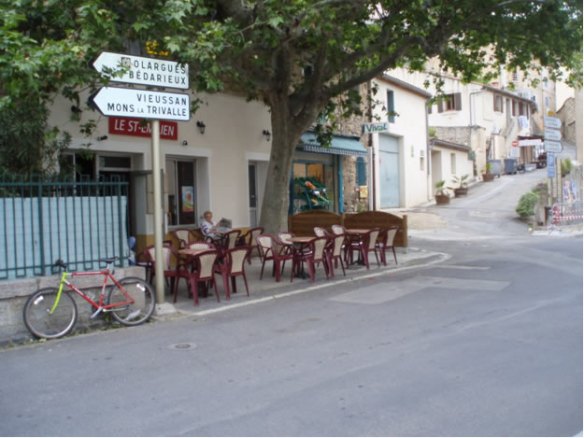 This picture was taken early on a Sunday morning (the day of the French presidential elections). The folks had all disappeared in the voting stations. The terrace of the café was normally full of habitués and foreigners. To the right of the terrace, the only grocery store in town was rarely without customers. Cyclists and motorcyclists stopped here regularly for a drop of courage before proceeding.

Roquebrun had a small park at river’s edge. The town is also known as Petit Nice because it’s climate is similar to that of the city of Nice on the Côte d’Azur. 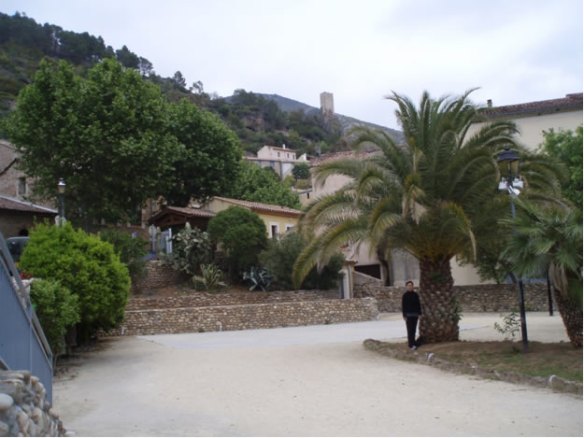 For anyone doubting the appellation, take a look at the palm trees in the park and, oui…oui, organge trees as well. 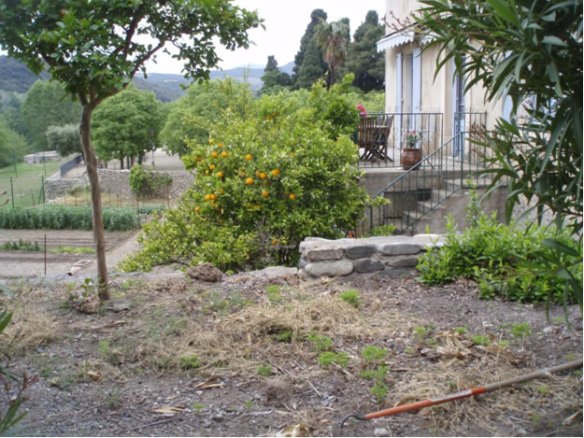 Roquebrun was built on a hillside for defense purposes, a similar strategy to the villages perchés in Provence. (the picture below shows Olargues, another hillside village in Herault. ed) 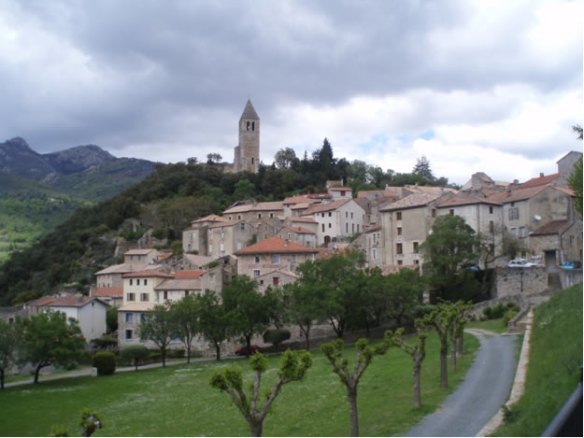 The picture below is confirmation that habitués and clients adorn the local café. The last picture I sent showed an empty terrace. 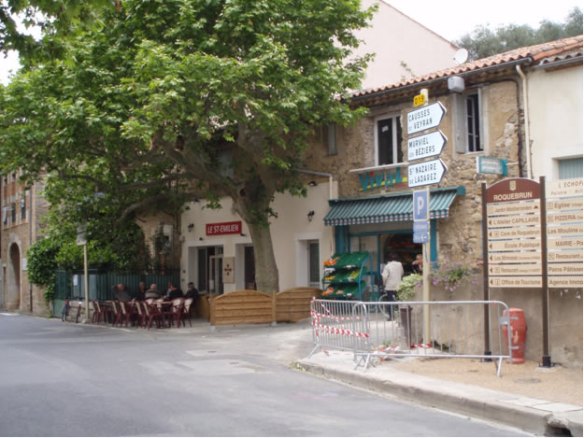 This photo was taken from the other side of the café and shows the grocery store and local signage. The café faces directly onto the bridge that crosses into town. It is situated on the left bank of the Orb river. When crossing the bridge to the right side, an immediate right turn put us on the entrance to the lane that led to our gîte, 3 km distant. The lane was excellent for walking and running but very narrow for automobiles. It also served as the entrance to a mountain biking trail that passed our house. 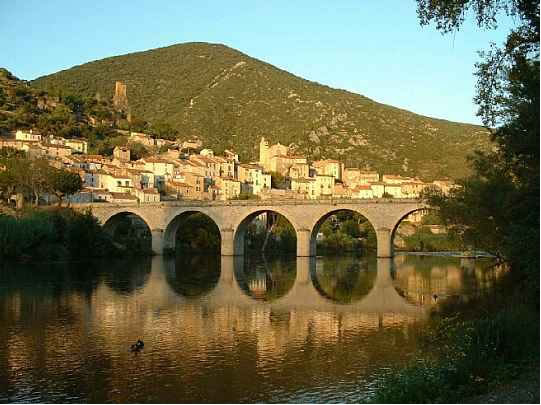 Roquebrun had only two bakeries. One was run by a young couple from Geneva who had moved to the village in order to enjoy a better quality of life. They turned their boulangerie into a small café-terrasse overlooking the river. The other bakery was in the grocery store. The proprietor claimed that her bread was better. We never got to taste it. By the time we got there in the morning all the baguettes were gone. 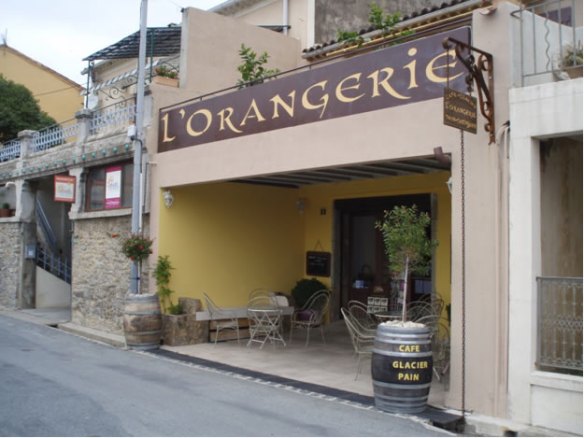 The name of the bakery was derived from the local orange groves.

Much of the arable land around town was used for a community vegetable garden. Ripe vegetables were plentiful in the south of France even as early as May. 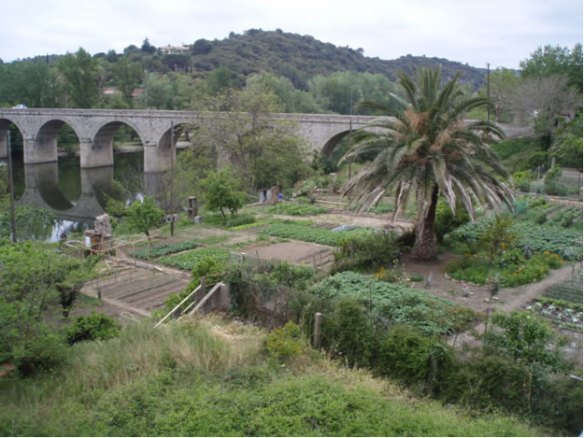 Roquebrun, as I mentioned earlier, was built on the side of a hill. As we wound our way up the narrow streets leading to the tower, I spotted a house below that typified the area in its architecture and vivid colors so prevalent in the south of France. 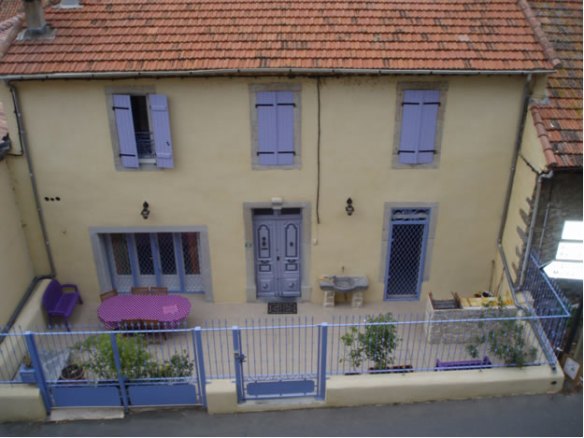 This violet and lavender motif is different from the colors in Provence, where blue or lime green shutters prevail that are offset with bright yellow motifs here and there.

A few kilometers out-of-town, about 1,000 meters above Roquebrun and nestled into a cliff side is a hamlet called Ceps. It’s small and charming. The Orb river rushes down from the high ground through the hamlet. An excellent hiking trail climbs upriver for 24 km to the next village. We didn’t have time to walk the whole trail but managed some of it. What we didn’t do on foot, we did in our car.

Saint-Chinian is a neighboring village about 15 km from Roquebrun. It has a population of approximately 2,000 people and is the eponym of the AOC wines in the region.

Before arriving at our gîte the first day, we stopped at a local café for a lunch of tapas. 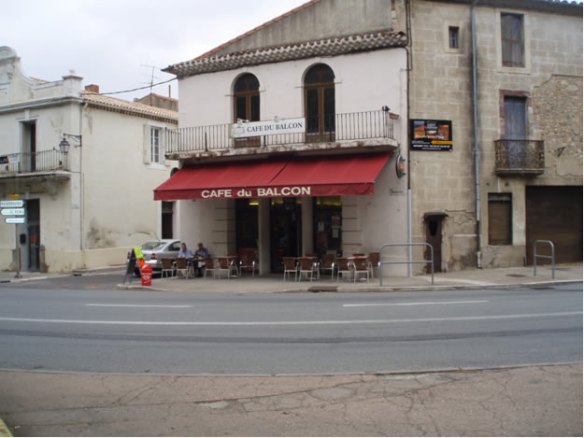 Both the tapas and prices were so good that we returned a few days later for lunch. That was after whetting our appetite at the bi-weekly market. Vegetables were already ripe and one can see traces of the Catalan influence on the red banner in the background showing a vendor of paella. 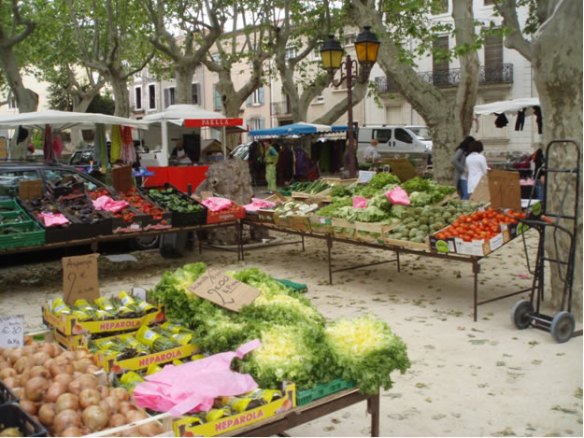 We returned to Saint-Chinian often in order to use the computer at the tourist office and to do walking tours of the town. The view below depicts a small park in the town center with the mayor’s office in the background. Most streets in town were tree-lined with fountains that are found everywhere in the south of France. 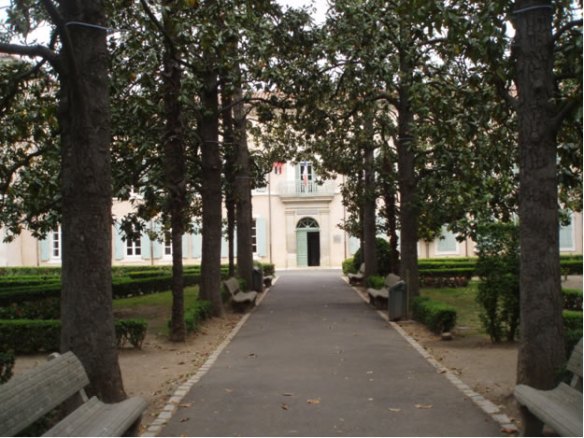 Saint-Chinian has over 100 marked hiking trails extending out from the town center. The trails lead hikers up into the mountains, through endless vineyards and along historic Roman sites. We chose a hike along the “Moulin” (windmill) trail. The windmill signaled the beginning of a hike that would take us over a shale filled path and past ancient domed stone dwellings. 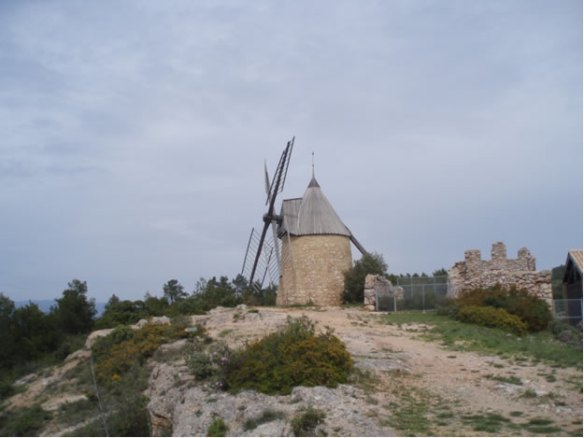 Just to the left of the Moulin an obviously prosperous couple had built a stone home that stood alone atop the hill and commanded a view of the entire valley and mountain range. The homes of the ancients were more modest. 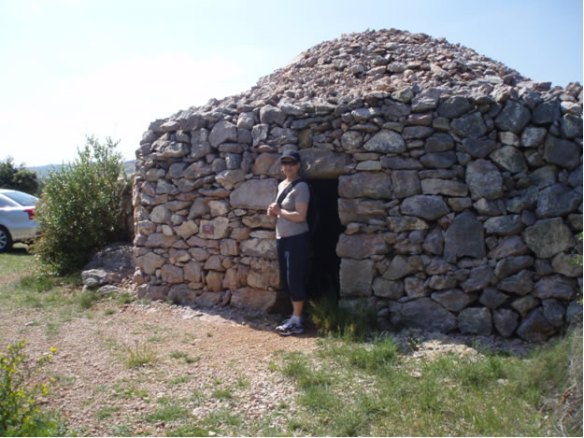 Bibi leaving our “gîte” to go shopping. No wonder we got the place for such a good price. Thanks, Andreas…