On a recent visit to Beziers I had some time to spare and decided to pay a brief visit the Plateau des Poetes, a park at the lower end of the Allees Paul Riquet. The park was created during the second half of the 19th century on a steep, wooded hill, and designed by the landscape architect Eugene Bühler in the English style on nearly 10 acres of land.  There are a few  theories as to origin of the park’s name, but the most likely is supported by the fact that the park is dotted with sculptures and busts of poets and writers born in Beziers. 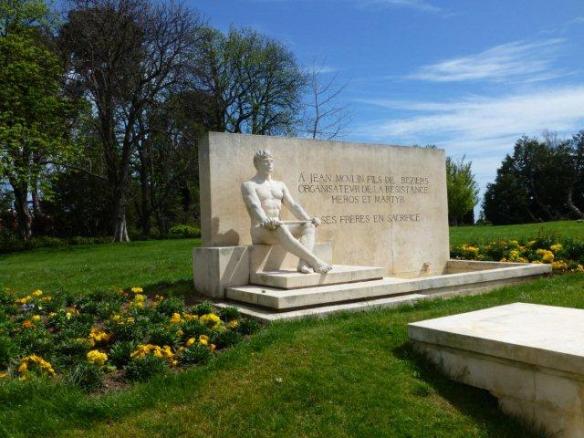 The first and rather striking sculpture I came across was one dedicated to the memory of Jean Moulin, who was a native of Beziers and a hero of the French resistance movement during the second world war.  The monument was designed by the sculptor Marcel Courbier, who was a friend of Jean Moulin, and who hailed from Nimes.

I’d come to check out the plantings of spring flowers – each year the Beziers municipality plants the most sumptuous displays – and I was not disappointed.  I was too late for the daffodils, but the rest more than made up for it.

There are many sinuous paths around the park, snaking across the hillside and there is a lovely walk at the top of the hillside, which allows you some wonderful glimpses of the park and the man-made lake (complete with ducks!).

One of the nice things is that it’s not all there for you to see at once, it needs a little bit of exploring!   The most dramatic feature of the park is the Titan fountain, sculpted by yet another Beziers native, Jean-Antoine Injalbert.  This sculpture is altogether 17 metres high, although if you approach it from the top you might not think it that grandiose. 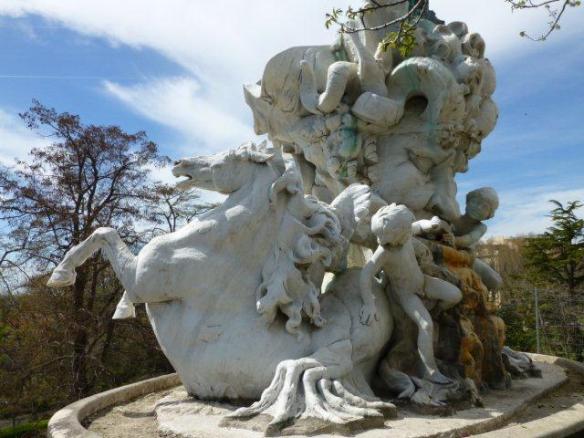 At the top is Atlas carrying the weight of the world – cast in bronze.  He’s resting on a stone base, representing Pan flanked by rearing horses.  If you look carefully at the first picture you can see the face and the horns.

The real drama of the sculpture is revealed as you take one of the paths down the hill and look at it from below.  There’s as much of it again, a base of rock which has water cascading or trickling over it into a basin at the foot.  When I was there all of it had been drained and was in the process of being cleaned.  I’m looking forward to the summer when the water is on again!

The flower beds around the lower part of the fountain were just spectacular – lots of anemones in a riot of colours!  And here’s a closer look at Atlas, carrying the weight of the world on his shoulders!

Injalbert also sculpted some smaller pieces, a little less dramatic, but very charming.  Here’s the centrepiece of another fountain in the Plateau des Poetes.

And there’s lots more to see.  The wrought iron gates at the lower end of the park, opposite the railway station are spectacular, but I didn’t get that far.  It was time for me to get back to my car and head off.  I hope you enjoyed your walk with me – we can go for another before too long, if you like?