What better way to spend a Sunday afternoon than by the waters of the Canal du Midi.  A little fete had been organised in Capestang by the tourist office a couple of weeks ago, and since the weather was perfect I couldn’t miss it!  One of the main attractions was a replica of a post barge from 1818, offering a glimpse of horse-drawn transport from a bygone age.

Le Cairol was moored up in harbour when I got there, and Robert Mornet, the man behind the construction of the boat, welcomed us aboard for a brief tour.  It soon became evident that travel in the early 19th century was not particularly comfortable – the main room of the boat would house 30 passengers, and there was only one toilet on board! In the salon next door, those who had more money could travel in a little more comfort, but I imagine that it was not in the lap of luxury.

The post barges were put into service by the administration of the Canal du Midi when it was first opened in 1681, and in the early days passengers got off one boat and onto the next one at each lock, so as not to waste time and water by going through the locks.  Later on the service got somewhat faster and from 1834 the express service took only 36 hours to cover the 240km between Sete and Toulouse.  At its peak, the barges transported 100,000 passengers annually, but with the advent of the railways, passenger numbers declined and the last post barge sailed in 1858.  Except in the records, no trace of these boats remained and so in 2007 Robert Mornet started to recreate a barge from plans found in the archives.  You can find out a little more about the barge and its construction here. 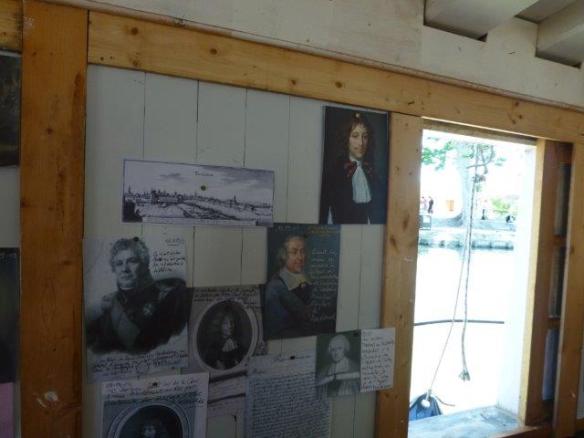 One thing to remember is that the barges were strictly for transport – no food was served, and passengers could not sleep on board.  For eating and sleeping there were auberges along the canal (see my earlier post about the Musee du Bitterois for a picture of the reconstruction of the interior of one such auberge).  There would also have been places along the way where the horses were changed. Take a walk along the Canal du Midi from La Redorte towards Homps and you can still find the buildings of a former auberge at La Dinée.

But back to the fete though!  There was a roving band which consisted of four musicians, and they played some wonderful traditional music.  I  took a brief video for you (e-mail subscribers, please visit the blog page to view the videos on this post):

After a quick visit to the tourist office alongside the harbour, it was time for the post barge to start its horse-drawn voyage.  The horse was harnessed and attached to the boat by a long rope.  The horse didn’t seem to be all that willing at first, but it soon got into its stride, and the boat picked up the speed required to get it under the bridge.  The early bridges on the Canal du Midi were only wide enough for a barge to pass, the towpath didn’t pass under the bridge but around, and the bridge in Capestang is one such narrow bridge.  This meant that a boat had to have enough momentum to pass through.  The horse(s) would be unhooked just before the bridge, and attached again on the other side.  Later bridges were built wide enough so that the towpath would pass under the bridge.  The Cairol made it safely through, despite a bit of a to do with a pleasure boat 🙂

The design of the barge is ideal for the canal as it creates hardly any wash, so no disturbance to other boats nor the banks of the canal as it passes by.   After all this excitement I took a stroll into Capestang for a drink – I decided that the restaurant/bar on the banks of the canal was taking just a bit too much of an advantage of its location.  In the plane-tree-shaded square to the side of the towering gothic church in the centre of Capestang are two cafes and it was very pleasant sitting in the shade, sipping a drink and eating an ice cream :-).

Back to the Canal and across the more modern bridge, where I caught another glimpse of the Cairol floating along, this time under motor power rather than horse power.

I made my way back to the port, past the marché des producteurs (farmers market), and while I was gone a small theatre set had been erected in front of the tourist office, and I was just in time for the show to begin.  “Tandem” was a mix of acrobatics, circus and music, very touchingly enacted by two performers who make up L’Appel du Pied theatre company, Geneviève Guillaud and Pierre-Alban Monfreux. 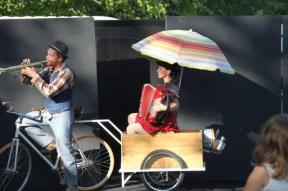 The show lasted for nearly an hour, and I did not feel the time pass – it was just delightful!  At the end they got a great big round of applause from everyone, and a well deserved rest, I hope!  I made my way back to the car and caught this lovely scene…

8 thoughts on “Gently gliding by”