Did you know that the octopus is part of the mollusc family??  I didn’t, but I am glad that I learn something each time I write a post!  Octopus is the name of  a restaurant in Beziers, and it’s located in the centre of town, on rue Boieldieu; as you can imagine it took me a little while to learn to pronounce the name of the street! 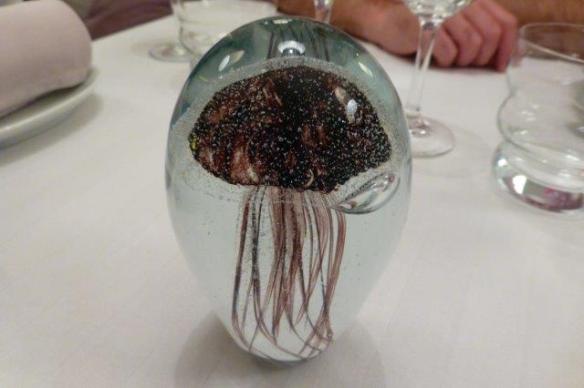 L’Octopus took its present form in January 2005, with Fabien Lefebvre in charge of the kitchen, Rachel Lefebvre looking after the wine cellar, and Laurent Montillard the maitre d’hotel.  The three had all previously worked at the Hotel Bristol in Paris, and you can tell that they make a great team from the moment you walk into the restaurant.  I’d been to L’Octopus previously, but only ever for lunch, so dinner was a new experience.  The whole restaurant had been given a makeover in September, and it was a joy to see the stylish result.  There are three dining rooms, two at the back overlooking the large courtyard patio, and one at the front, next to the cozy bar/lounge. We were the first guests to be seated in the dining room at the front, and to begin with it felt a little awkward, but soon the tables around us started to fill up, and as the noise level rose the ambiance warmed up. 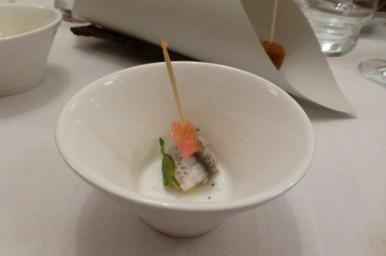 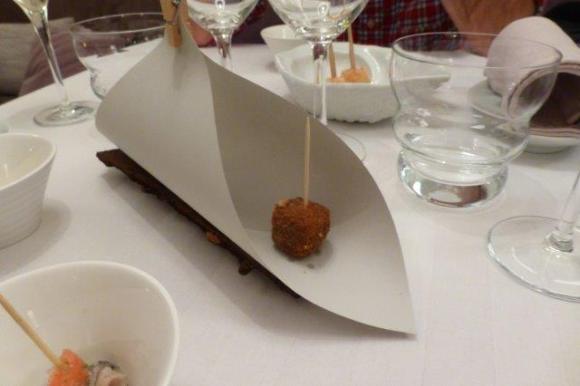 Dinner had been a present from friends and so the heavy task of choosing what to have did not have to be accomplished!  A glass of champagne arrived, followed shortly afterwards by a “mise en bouche”, a little something to get the gastric juices flowing.  I can feel myself salivating as I am writing this, and you may possibly be salivating too as you are reading.  Three delicious morsels to get us in the mood:  a marinated anchovy fillet seasoned with sansho pepper, a Japanese spice; acras made with salt cod and served with a delicately light sweet-and-sour sauce; and kromeskies (small croquettes) made from pigs head, crispy on the outside and juicy inside, served with a mustard and yoghurt dip.

After a brief pause the starter arrived – a beautiful picture to behold, with the most divine smell!  I’m sorry that this is not “scratch and sniff”!  Everything had been beautifully placed, down to the last delicate leaf. 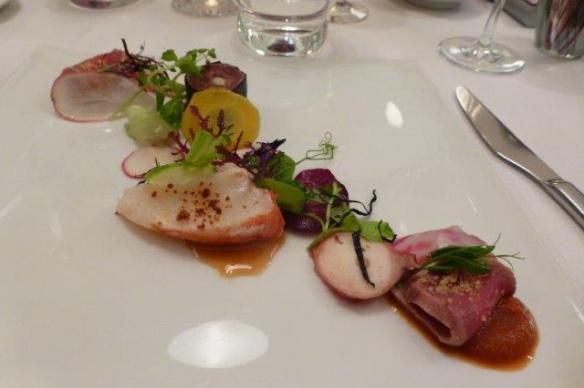 At the centre of the dish is a piece of lobster, and in the two corners are slices of tuna.  The slices had been cut from a slab which had only just been seared on the outside. Behind the yellow carrot slice is a maki roll, raw tuna wrapped in a sheet of nori (algue) with a stick of raw cucumber at its centre.  The sauces were made with miso and the whole seasoned with gomasio, a mixture of sesame seeds and salt.  So by now you might be able to imagine the smell, and I can assure you that it tasted every bit as good as it looked.  To accompany there was a generous glass of white wine, Domaine Les Hautes Terres from Limoux, a 100% chardonnay which was a perfect match!!

The first of the main courses was fish, a fillet of red mullet.  The fillet was perched on a ring of puree made from potatoes and coco beans (a white haricot bean, Coco de Paimpol), and the ring contained a most delicious stock made from red mullet bones and saffron.  Also perched on the ring were pieces of grilled squid, and the decoration was made from squid ink. 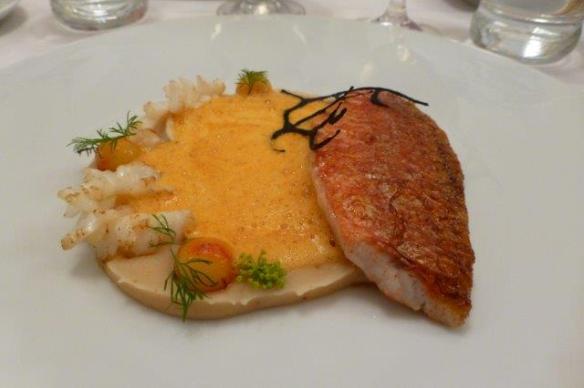 The “pearls” on the ring were made from potato and the tiny sprigs of fennel were wonderfully refreshing.  Outside the ring, and just under the fillet was a little bit of pureed red mullet liver, which provided a good kick of iodine.

By now I was wondering how this could be followed.  Our waiter laid the table with a fork, a spoon and a sharp knife, and replenished the bread (excellent bread rolls, nice and crispy with very good flavour).  The whole menu was decided by the chef, so when the second main course came to the table it was a very nice surprise! 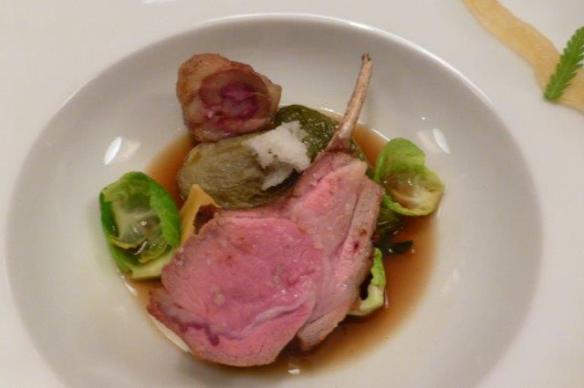 The most beautifully pink lamb chop arrived in a deep plate, surrounded by lamb stock and vegetables, and tucked under the leaf on the left was a delicate ravioli filled with goat’s cheese.  The rose shaped item was a bit of lamb kidney, and the pale yellow strip in the top right corner is a piece of candied citrus peel, from a fruit called Buddah’s hand (see the fourth picture of “oranges-and-lemons” for what that looks like), by way of a condiment.  I can’t ever remember eating lamb this tender or tasty – my guess is that the meat was cooked by the low temperature method, and it was 100% successful in this case.  The knife just slipped through the meat like butter, but not cold butter out the fridge!  The chop was nice and thick, the vegetables just perfect and the stock a delight.  I’m no fan of kidneys, so I gave that a miss – and perhaps I missed something, but I was worried about spoiling the rest of the dish by trying it.  With the lamb came a glass of Corbieres red wine from Domaine Ledogar, another great match.

By this time we had struck up a conversation with the couple at the next table, who were staying overnight in Beziers on their way to Spain. They had been to the restaurant in its previous incarnation 20 years earlier and were very pleasantly surprised by the wonderful food.  Their meal continued with cheese, and a magnificent cheese trolley was brought round, carrying a beautiful selection of cheeses. 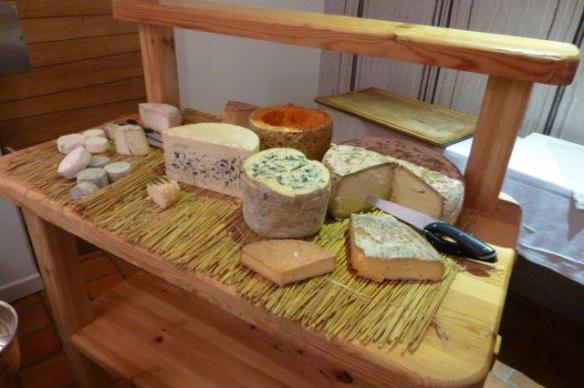 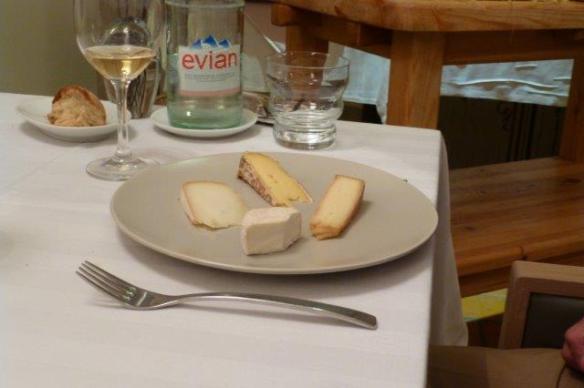 For us it was time for dessert – another gorgeous creation on a plate! 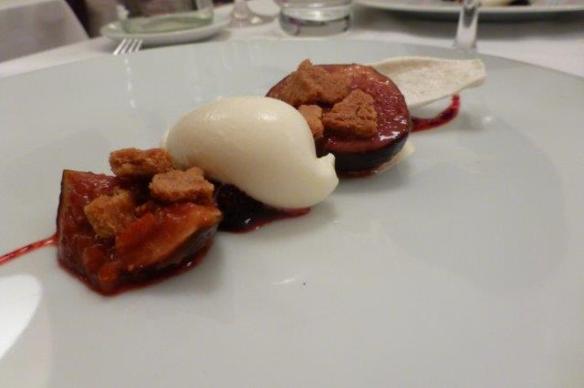 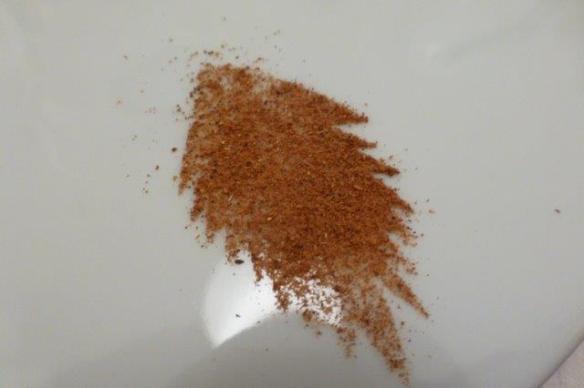 The black figs had somehow been cooked without getting mushy, and sprinkled with pieces of home-made speculoos, a spiced shortbread biscuit.  In between the figs sat a scoop of yoghurt ice cream, on a bed of blackberry compote, and right at the end sat a wisp of meringue.  Cooked figs can be cloying and uninteresting, but this dessert was perfection in every sense, with contrasting flavours and textures and just enough sugar.

A meal like that is a little like climbing a mountain and coming back down again, the art is to come back gently and slowly.  You reach the peak and on your way down you want to keep the feeling of exhilaration for as long as possible.  Continuing with coffee, or in my case a lavender infusion, is a good way to go.  Eau de vie or a brandy would be good if home can be reached on foot. 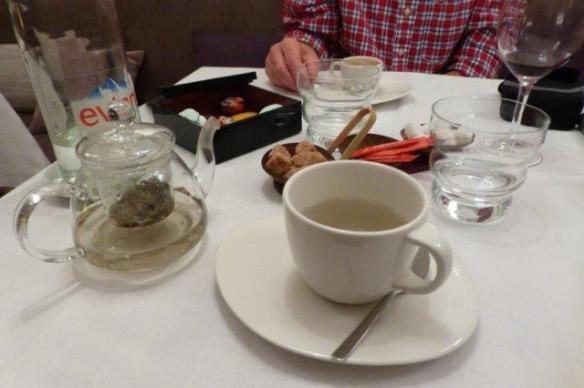 The petit fours which accompanied the coffee and herbal tea were lovely too, and part of the gentle winding down.  The beautiful lacquer box held a marshmallow knot, a tiny cake made with red berries, and a lemon tart with a hint of mango for each of us. 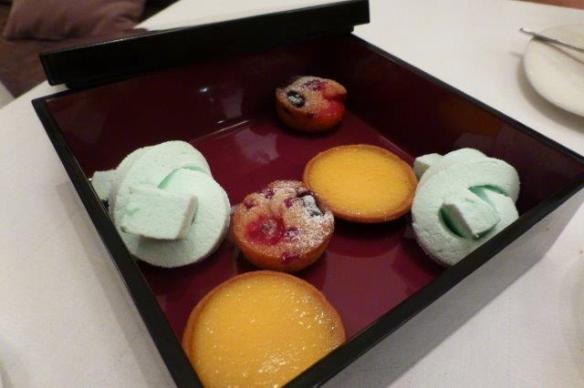 Service throughout the meal was absolutely impeccable – attentive without being intrusive and friendly without being familiar.  All the staff were happy to try their English for the benefit of our fellow diners on the table next to ours, and had a sense of humour when they got stuck with their translations.  If you are in Beziers and are looking for somewhere to have lunch, don’t think twice.  And if you’re looking for a somewhere for a special night out, L’Octopus is the place to go!!

Thank you P&S for a fantastic evening!

6 thoughts on “A starry mollusc”