The quest for the perfect madeleine started a few years ago.  The children of friends, who have a holiday home in St Chinian, used to go to the bakery next door to buy bread each morning.  One day they brought back madeleines along with the bread, which were gorgeous, and the whole family got hooked!  On their next visit to St Chinian the madeleines made irregular appearances in the bakery, and by the following year they had disappeared altogether.  ‘Not enough demand’ said the baker, ‘people weren’t really buying them’, and so he stopped making them.

The children were bereft, but the gift shop across the road had a madeleine tin for sale, and so the testing began.  At a flea market I came across my own madeleine tin, so between us we were now able to bake a batch of 24 madeleines with ease. 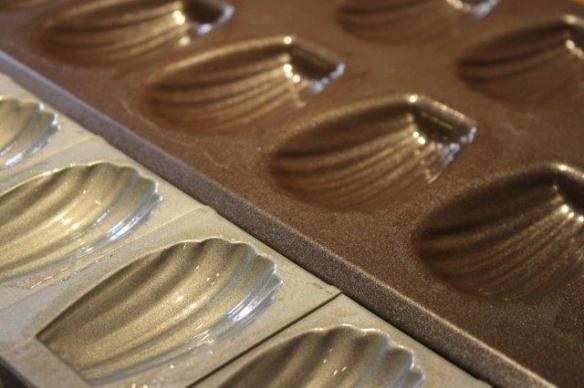 I started my search for recipes on my bookshelf on http://www.eatyourbooks.com, and found that six of my books listed a recipe for madeleines.  I checked a few other books on my bookshelves at home, and in the end I turned up 10 recipes altogether.  I then made a comparative table for all the recipes.  Of course there were differences, both in method and in quantities, but the basic ingredients remained constant:  eggs, butter, flour, and sugar. There were various additions such as orange flower water, almonds, vanilla, rum, salt, baking powder, and lemon in various proportions and combinations. 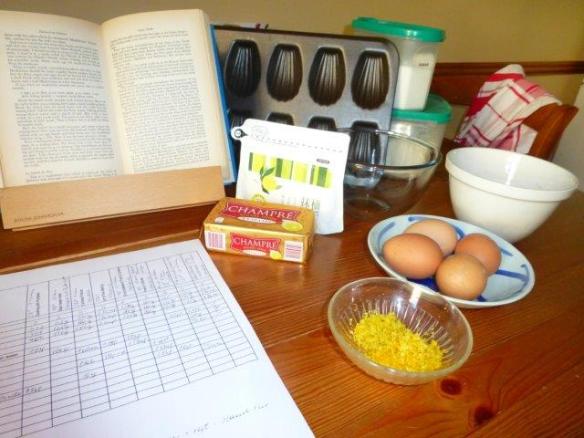 For seven of the 10 recipes the preparation was done by the “Genoise” method, where the whole eggs are beaten with the sugar (sometimes over hot water) until very thick and creamy, then the flour is folded in and lastly the melted butter.  This method is supposed to produce a light and moist sponge cake, used in high class patisseries for their cream cakes.

The other three recipes each used a different method: one was the traditional “creaming” method, where butter and sugar are beaten together until light, the eggs added by degrees and finally the flour (The Penguin Cookery Book); another mixed sugar and flour, added the eggs and finally the butter (The Very Best of Baking); the last was the only one of the recipes where the eggs are separated (Cooking with Pomiane). To the yolks are added the flour, sugar, baking powder and orange flower water, and a little water is added to loosen the resulting stiff paste. Next the melted butter is added and finally the beaten egg whites.   I decided to try two recipes:  the one from Cooking with Pomiane and the one from Rick Stein’s French Odyssey.

Cooking with Pomiane is one of my favourite cookery books, both for the writing and the recipes. I have just discovered that it was last published by Serif in 2009 (the original was first published in French in the 1930’s), and is still available from the usual booksellers.

In his book, Pomiane recounts in a charming story how madeleines came into being.  Apparently there once was a baker with a very pretty young wife, who took up with a lover when her husband went away on a trip.  When the baker returned unexpectedly the wife told a story of having had to hire help.  The disbelieving baker gave the lover the challenge of producing 18 cakes immediately, or he would kill him and his wife.  The distraught lover, knowing nothing whatsoever about baking, started to pray to St Mary Magdalene, who dutifully appeared and prepared the cakes.  She did apparently make him promise to mend his ways before she disappeared.  The baker returned, the lover presented him with the cakes which he christened madeleines, and the errant wife and her lover were spared.  Wouldn’t you agree that this is a lovely story??  Pomiane writes that he read the story in a book by Charles Nicolle (a Nobel Prize winner in Medicine) called Le Patissier de Bellonne.

The Larousse Gastronomique would have us believe that Avice, the pastry cook to Prince Talleyrand, invented the madeleine when he baked a pound cake mix in aspic moulds.  I’m not sure which of the two stories is the more likely!? 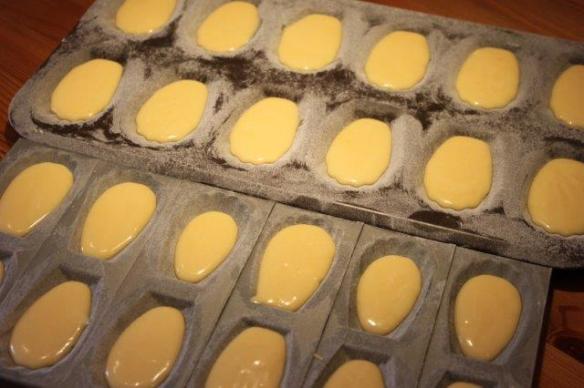 Quantities for the Pomiane recipe are 4 oz each of flour, sugar and butter to two eggs.  Additions are 1 tbsp orange flower water, 2 tbsp water and 1tsp baking powder (the recipe in the Penguin Cookery Book gives identical quantities, with the baking powder omitted).  The first batch released easily from the tin and showed a good imprint and a nice bump on top.  With the second batch I mixed in a little matcha, Japanese green tea powder – I had it to hand and had been meaning to try using it in baking for far too long.  The bumps on the batch with matcha added showed even better, but I think I cooked them a little too long.  For this recipe the temperature was specified as 220 degrees centigrade, and cooking time as 9 – 10 minutes.

The second recipe I tried came from Rick Stein’s French Odyssey.  Proportions are 100g each of flour, butter and sugar, and three eggs.  Also the zest of 1 lemon, 1 tbsp honey and 1 tsp baking powder.  Once the paste was prepared it was left to stand 15 minutes in the fridge. Oven temperature was 190 degrees centigrade, and cooking time 10 minutes.

The resulting madeleines were difficult to release from the tin, totally flat on top and unevenly browned.  The second half of the paste was baked at 220 degrees centigrade, released more successfully and formed the characteristic bump on top.  They were somewhat floppy and too light, but with a good flavour. 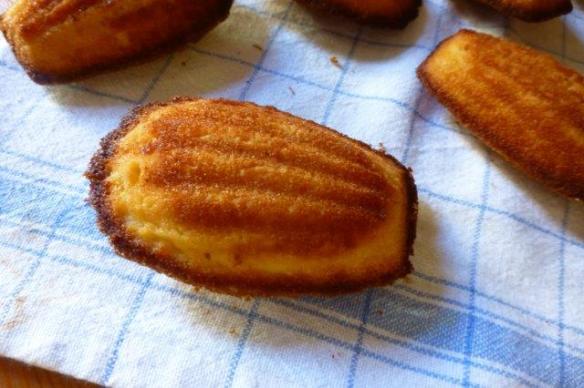 So perhaps this is a quest to be continued?  Do you have your own favourite madeleine recipe you’d like to share? 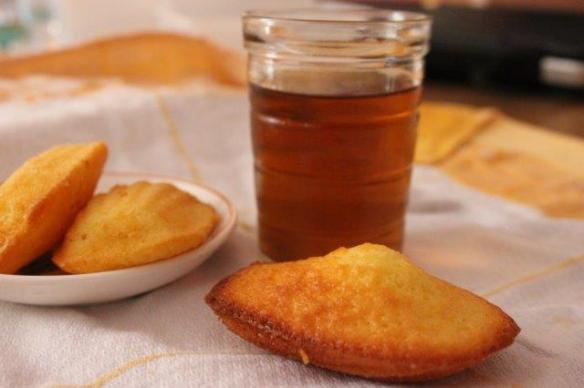