May this season be filled with good cheer,
with your loved ones around you,
may you be warm and cozy,
may there be sparkle in your eyes, in your glass and on your tree,
and may you be able to enjoy all the blessings in your life!

We’ve been having some beautiful sunny weather and gorgeous blue skies, and it’s been difficult to get into the Christmas spirit. I thought I could remedy that with a visit to the Fete de la Saint-Nicolas” Carcassonne, and what a good idea that was. On the way I passed through Trebes, where the Canal du Midi runs beside the road for a short while. Take a good look at the picture.  It’s not often that you’ll be able to see the Canal du Midi without water, and it won’t be all that long before it will be filled again. The canal closes to navigation at the end of October, for two months of maintenance works. During that time some sections of the canal get drained of water, to allow work on lock gates and such to be carried out.

On to Carcassonne though! I found a great parking spot near the railway station and walked right across the lower town and up the hill to the Castle – strictly speaking it’s a fortified town with a castle inside it. It is not as far to walk as you think and it’s a very pleasant stroll down the pedestrian Rue G. Clemenceau, turning left into Rue de Verdun, past the Dome and across the Pont Vieux. 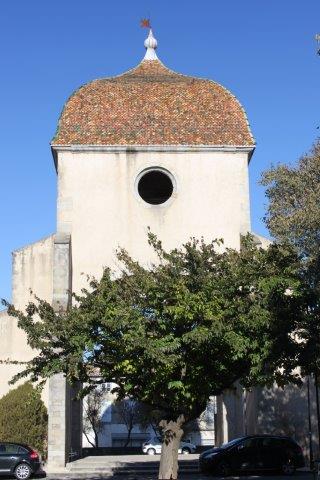 The Dome is a curious building, and I’ve not been able to find out just what it was for, but my theory is that it might have been the building at the centre of a covered market like the one at Revel, not all that far away.

From the Pont Vieux the views of the Castle are spectacular! (If you are around for the fireworks on July 14 it’s a good viewpoint, but it will be very crowded!) On the bridge a young man sat playing his accordion, seemingly only for himself, not for an audience. It was lovely to sit in the sunshine, watch the world go by and listen to the music. 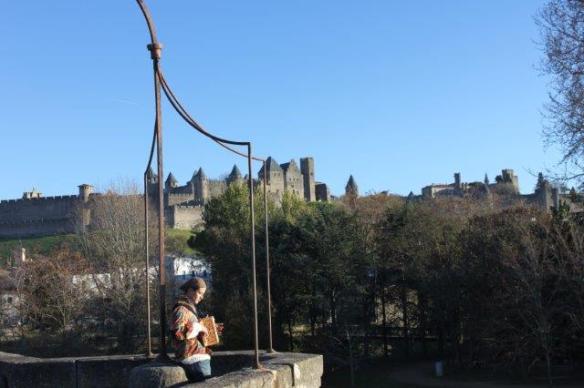 Once across the Pont Vieux you enter the Trivalle neighbourhood, which has a lovely feel to it. There are many old buildings which have been beautifully restored, and others which have a completely original and unrestored feel to them.

When I got there the Castle was not as crowded as it usually is during the summer months, but I was there not long after lunchtime, and perhaps everyone was still eating? I was looking for the arts and crafts market, held on the occasion of the Fete de la Saint-Nicolas, from December 6 (Saint Nicholas Day) to December 8 this year. There was a lovely selection of items and the backdrop was of course wonderful. The market was held right next door to the open-air theatre where all kinds of concerts are performed in the summer.

After a stroll around the rest of the castle, and a snack, I was off again, down the hill and across the bridge, to explore the main Christmas market in Carcassonne, which is held on Square Gambetta. From the castle I had already seen the big ferris wheel, and there was a lot more when I got there!

The children’s interests were well provided for with several rides: reindeer for the little ones, a Disney themed magic sleigh ride, and the beautiful carousel which is normally outside the castle, in addition to the big ferris wheel.

The stalls around the square sold a variety of goods, with food and mulled wine being at the fore! I couldn’t resist the sweet pretzels, which were really doughnuts in a different disguise. With a glass of mulled wine they were heavenly! And they got eaten so quickly that the thought of a photograph never even entered my mind :-)! Not far away in Place Carnot a skating rink had been erected, taking up pretty much the whole square.

On the way back to the station there was yet one more stop – by the Andre Chenier car park the sledge runs had been set up! An enormous structure, clad in white fabric, with runs on either side. One side allows the children to race down on small toboggans, the other side is for children and adults and you race down on large inner tubes – what fun!! 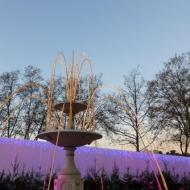 Around the sledge runs there were more fair ground rides, a fairly tame reindeer rollercoaster and some lovely “ride-your-own-reindeer” bicycles for the smaller children! 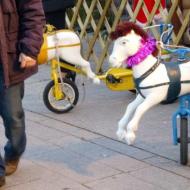 Across the Canal du Midi once more to get to the car, and a quick snap of a lovely scene in the port. 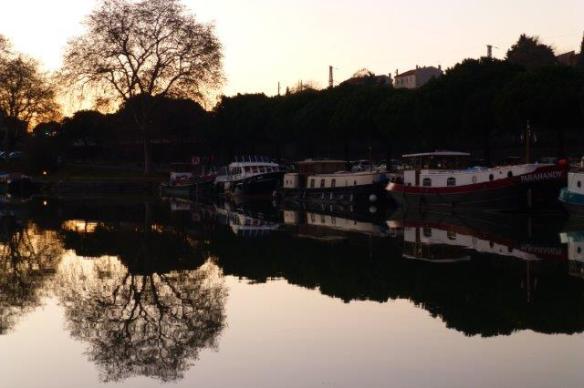 And then it got dark, and the whole magic of Christmas came to life!! 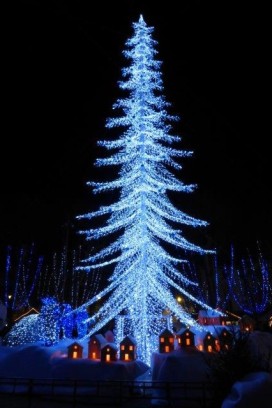 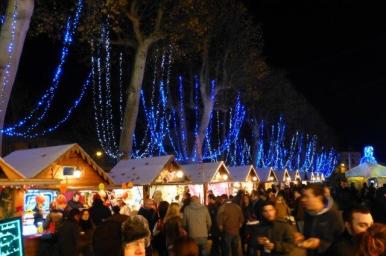 I don’t think anyone can say “bah humbug” to all that! 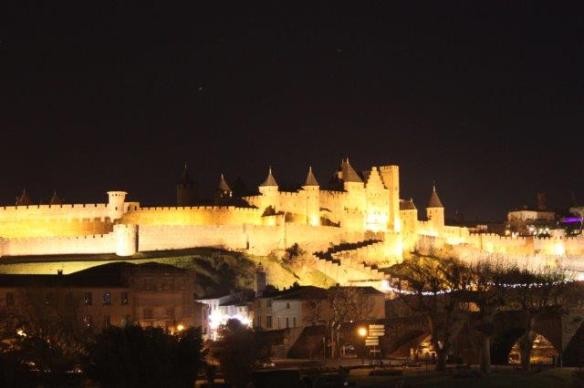 A final note:  the market and rides on Square Gambetta and the sledge runs by the Andre Chenier car park are open until January 5, 2014;  the skating rink on Place Carnot is open until December 20, 2013.

A few years ago I came across the concept of Circuit Court, which I think may translate as Locavores in English. It means eating locally produced food, and, in the case of Circuit Court, buying it directly from the producers. There was a regular spot not all that far away and at the time I made an effort to go on a regular basis, but somehow it all fizzled out for me. That was until about a month ago, when I was handed a leaflet by Valerie Tubau (of Le Jardin de Valerie) in St Chinian market. She’d managed to get a new venue organised in Agel, just a few doors away from where she lives and works. The mayor of the village had kindly agreed to lend the village hall for the markets every other Thursday, and an association was formed to run the project.

I went along last week to check it out, and it is a very interesting project. The products on offer depend very much on what is in season, and what can be grown locally at the time of year – so no strawberries or French beans here in the winter! But there are many delicious vegetables to be had right now – and more! On the day I went, in addition to Valerie’s vegetables, there was organic wine from Domaine Gabelas, honey from La Caunette, cheese from Bois Bas near Minerve, bread from Ferrals la Montagne, cakes from Agel, fresh pasta from Ouveillan, safran from Bize-Minervois, olives and olive oil from Argeliers, charcuterie from La Salvetat, meat, syrups, pates,  jams and jellies, and more which I can’t remember. The producers may vary from one market to the next, but the common thread remains the same: locally produced food, to be bought direct from the producer. For some items, such as meat, stocks are limited and orders need to be placed in advance of the market.

The market takes place in the village hall in Agel (34210) every other Thursday from 5pm to 7pm. Future dates are as follows:

For information you can e-mail circuits.courts34@gmail.com – I’m sure the organisers would prefer communications to be in French where possible.

P.S.  The chocolate and caramel tarts were delicious!  Worth the trip alone 😉

The round of Christmas markets has started and this past weekend I visited two: one in St Chinian and the other at the Chateau-Abbaye de Cassan near Roujan.  Since I wrote about the St Chinian Christmas market last year, I’ll write about the at Cassan instead.  The market at Cassan goes by various names – there is the Marche de Noel a l’Anglaise (Christmas market in the English fashion), La foire de Noel (Christmas Fair), and finally the Cassan Cracker Fair.  This market was established eight years ago, and in the early days it was very much aimed at the British expat community in the area, who felt deprived of their Christmas crackers.  If you don’t know what Christmas crackers are have a look here.

The Cassan Christmas market now attracts almost as many French visitors as British ones, and there is a great mix of nationalities among the 120+ exhibitors.  To cope with the number of visitors, the market is being held on Saturday and Sunday.  For me the attraction was two-fold: to visit the Chateau-Abbaye and the Christmas market.  Granted, it’s not the best time to visit the buildings when hundreds and even thousands of other people are there too, but still.  A reduced entrance fee of 2 EUR (the regular entrance fee to the Abbey is somewhere around 7 EUR) is charged during the two days the Christmas market takes place, so it’s worth the trip for that alone ;-). 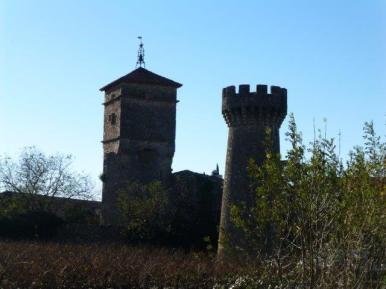 The Abbaye de Cassan was first established in 1080 as an Augustinian priory, and in its heyday numbered 80 priors.  The church was consecrated in 1115, and until the plague and 100 years war in the 14th century all was going swimmingly.  Then the rot set in and decline continued until in 1605 there were only 7 or 8 priors left at the priory.  And then, in the middle of the 18th century the abbey was completely re-built, except for the church, not all that long before the revolution chased the remaining priors from their new palatial quarters. 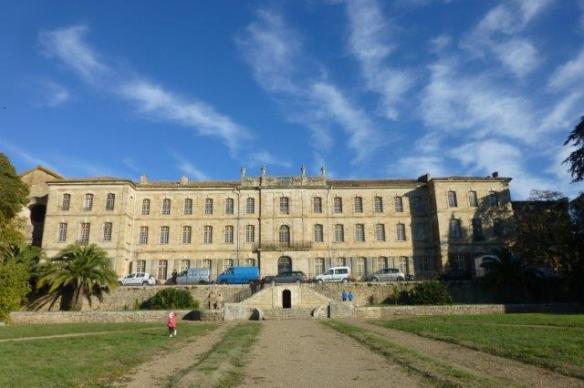 For palatial they certainly would have been.  The facade on the garden side is worthy of any stately home, and the salons on the ground floor would have been very beautiful.  Unfortunately the gardens are somewhat neglected, the parterres inexistent and the pond looks as if it has been dry for some time. 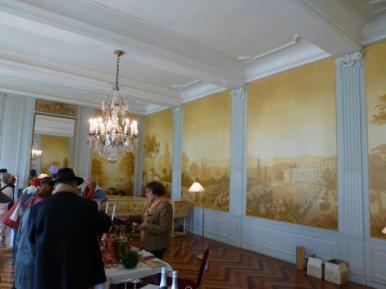 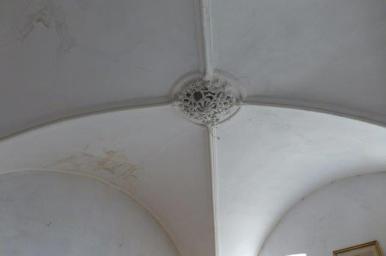 The facade onto the main courtyard is no less impressive than the garden side, and provided a good foil for the stalls which were set up outside.

I was hoping to indulge in my favourite fish-and-chips, but I was too late – there was no fish left.  The chips were excellent though, and more than enough to keep me happy for the rest of the afternoon!  The galleries inside the three wings which surround the main courtyard look as though they could have been serving as a cloister at one point, though if that were the case,  the fourth wing is perhaps missing – or was never built? 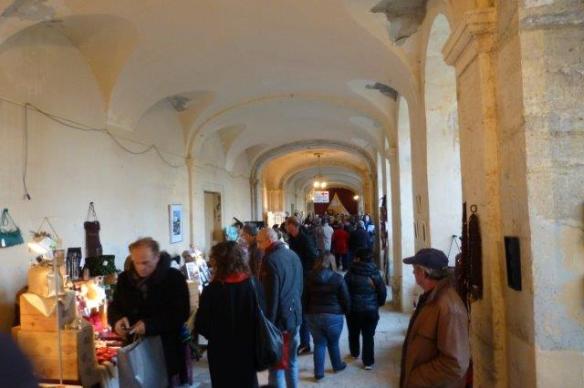 The church is incredible – only slightly modified in the 18th century – and is one of the largest romanesque churches in the area.  When I arrived a cellist was playing at one end, and the sound beautifully filled the whole building despite the ambient noise.  A concert would probably sound fantastic here!  The stalls in the church, and elsewhere, offered a wonderful selection of goods:  some traditional British Christmas food such as mince pies, Christmas cake and plum pudding, a good amount of jewellery, textiles, gift items, gardening tools, glasses, wine and champagne, carpets, handicrafts, and there was a stall selling beautiful lampshades made with traditional Japanese and Nepalese paper, which was my favourite. 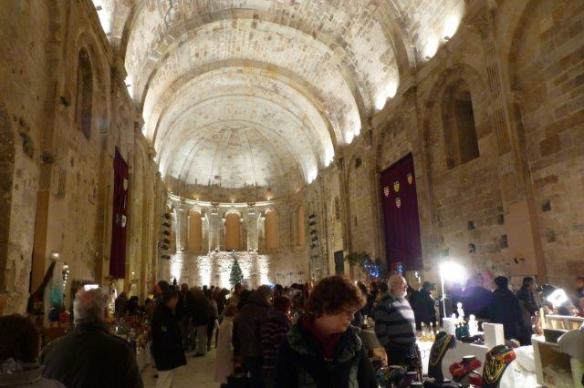 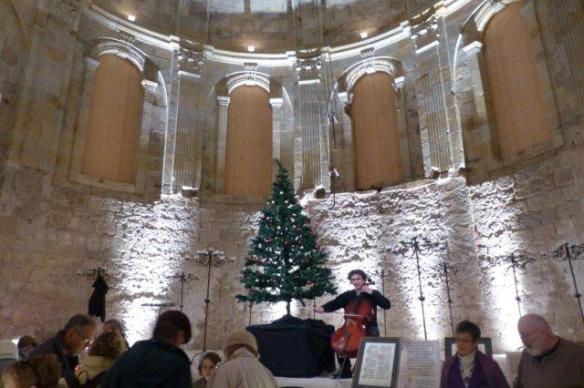 The cupola on top of the church is called “lantern of hope”.  Legend has it that a fire was kept burning in the lantern each night to help guide the pilgrims on the way to Santiago de Compostela to the abbey, where they could spend the night before continuing on their pilgrimage to the Spanish sanctuary.

Plans are afoot to develop Cassan into a corporate retreat, so plan to visit as soon as you can, while you still can!  For more reading on Cassan have a look at Wikipedia in French and English.  A virtual tour is available on YouTube at http://www.youtube.com/watch?v=kyxJGy_K1iU and there is also the official website at http://www.chateau-cassan.com/ 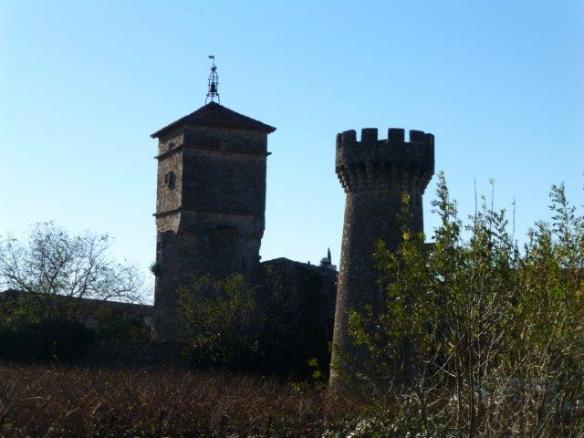