This year, for the 25th time, Lezignan-Corbieres hosted PROMAUDE, a three-day county show.  What started as a small, market town fair, has turned into a one of the largest events of its kind in the area.  The name is a clue to what it is all about: to promote the Aude department and all it has to offer in the way of food and wine, tourism, arts and crafts and …

For the 25th anniversary, a special pavilion had been erected, very close to the entrance to the fair.  The pavilion had been shipped from Holland especially for the fete, and you can tell by looking at it that it has been around for some time – they don’t make them like this any more 🙂 !! 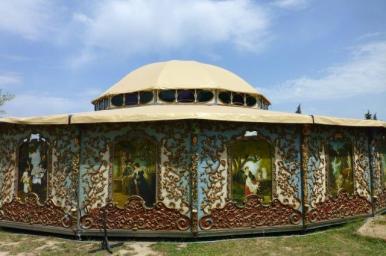 Inside the pavilion was the Degustotheque-Tastoteca where a number of wines could be tasted.  There was also a space for cookery demonstrations, but I managed to miss those :(.

Food and drink appeared to be everywhere, and people were certainly tucking in!  I went to the fair on the spur of the moment, after lunch, which was a mistake – I should have gone BEFORE lunch and tried some of that food!!

As I was browsing the many stalls, I noticed music coming closer.  It turned out to be La Fanfare des Goulamas, a brass band, wonderfully disguised as insects and animals found in the garrigue.

For children (and adults) a large area had been set aside with games of all kinds, and right next to that was the “living farm”.  Several producers had brought some of their livestock along.  Heureuse, the dairy cow, was getting fed up on this last day of the fair, constantly being petted by small children, who shoved handfuls of straw in her face, thinking she would eat it.

The calves next door and the goats were more perky, and not quite as “petted out” yet, whilst the donkeys were patiently waiting for their next riders.

The biggest draw of the “living farm” was the trout pool.  A large rectangular basin had been set up, with a fountain in the centre, to aerate the water.  The basin was well stocked with trout, and visitors could fish for their supper! 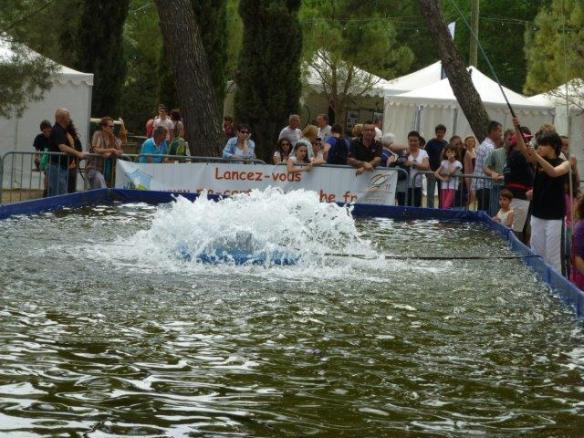 The agricultural side, so important to a county fair, was of course well represented, and there were all kinds of tractors and farm equipment on show! 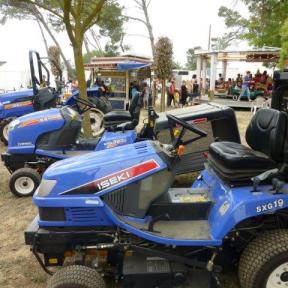 Earlier in the day an Agility Dogs Competition had been held, and the trophies were being prepared for the winners.

The most fascinating part of the show, for me, was the blacksmiths’ corner – a large area where an outdoor workshop had been set up by the Aude Blacksmith’s Association.  I counted seven hearths and at least as many anvils, and in the centre was a large power hammer.  The place was a hive of activity, everyone working away at his piece, which was to be part of a large sculpture on the theme of Wine and Gastronomy.  The video, which I’ve included after the pictures (e-mail subscribers, please visit the website to watch the video), should give you a good idea as to how a piece of iron can be transformed into a work of art! 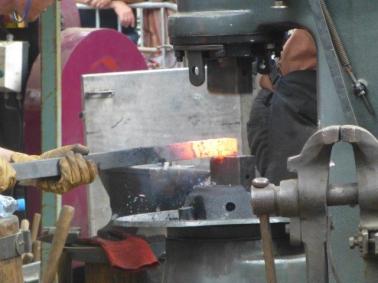 So there you have it – a great day out, and one I would recommend you to repeat if you are ever in the area at the time Promaude takes place!

2 thoughts on “Come to the fair”