I’m up for pretty much anything, so when a friend suggested we go walking with llamas, I agreed right away.  The llamas live in the hamlet of Pez, near Pardailhan, and are owned by Murielle Marcle and Christian Tinel.  Murielle and Christian run Les Lamas du Pardailhan. Murielle trained in animal-assisted therapy, and the farm regularly hosts children from care homes in the area.  She also offers guided visits of the farm, as well as the walks with the llamas, which I had come for.

In the paddock five llamas were waiting for our visit:  Machuca, Chachani, and Hiskalda were female adults; their daughters Lima and Quinoa were both born in May 2013.

Before we got going, Murielle gave us some facts about llamas.  Llamas are part of the family of camelids, and are related to camels and alpacas.  They are very social animals and only thrive as part of a herd.  Llamas are also very quiet animals, they don’t make noises like any of the other four-legged farm animals.  Llamas have a reputation for spitting, however they tend to spit only at each other, not at humans.  They are entirely vegetarian, and feed on grasses and leaves.  You’ll be able to read up on a whole lot more llama facts in this Wikipedia article.

Llama wool is very soft and fine, but not as highly prized as alpaca.  Murielle’s llamas are woolly lamas, and they have to be shorn from time to time, to stop them from getting too hot during the summer.  That said, the hair along the neck is usually left long.  The wool contains no lanolin, and the llamas have no noticeable smell. 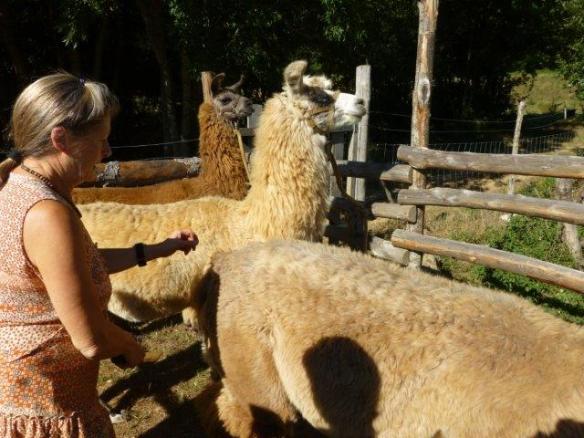 Before we started off, Murielle coaxed four of the llamas into the corral, a small enclosure on one side of the paddock, where each llama had a halter put on.  This was followed by some brushing, so that we would get to know the llamas close up 🙂 !

Once we had done the grooming and getting-to-know-you bit, we set off on our walk.  Unfortunately one of the llamas had to stay behind, and she was not very happy on her own. 😦

Our walk took us along leafy lanes, with very frequent stops – the llamas found all sorts of delicious leaves and grasses growing along the way.  The leaves of chestnut trees were particularly prized!!

On the return we came across a beautiful meadow, and that must have been heaven for our four-legged friends. 🙂

All too soon we were back at the paddock, and once we’d said our goodbyes to the llamas they went for a run around their paddock.  As we walked back to the farmhouse, I couldn’t resist taking a picture of Murielle’s vegetable garden. 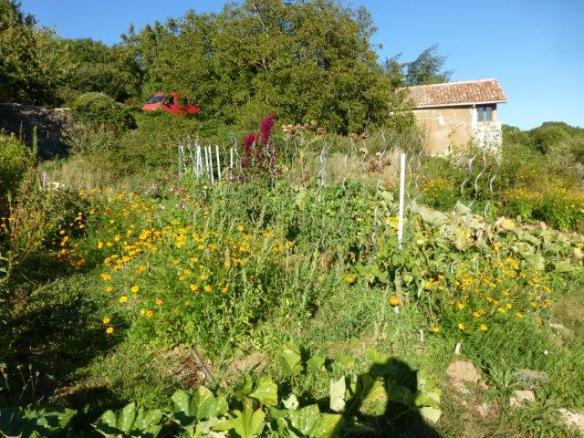 If you would like to book a walk with Murielle and the llamas, please contact her via her website http://www.lamas34.com or by telephone on +33 467 236 118.  There must be a minimum of three persons for each walk, and the walks cost 10 EUR per hour/person.

6 thoughts on “Walking with llamas”