What do you do when you have friends visiting, and the weather is promising you the most beautiful sunny autumn skies???  Go on a day trip, of course!! 🙂

That’s how I found myself driving to Saint-Guilhem-le-Desert one sunny day last week.  In my mind Saint-Guilhem-le-Desert was always too far away to visit, but it turns out I was wrong.  The village can be reached in just a little over an hour’s drive from St Chinian, about the same time it takes to reach Montpellier or Carcassonne.  My reason for visiting?  Saint-Guilhem is one of the most beautiful villages of France — a site and sight worth visiting!  I think you’ll agree when you see this picture: 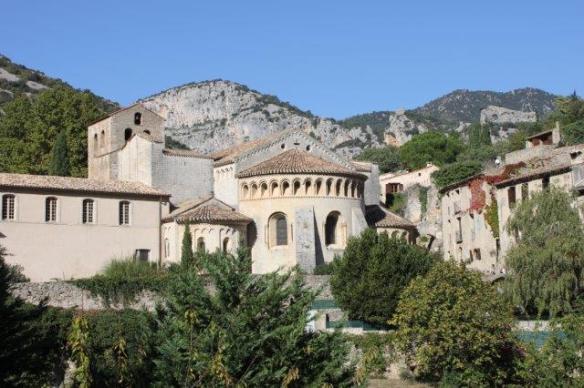 This is the first glimpse of the old Abbey of Gellone, as you drive to the car park at the top of the village!  Pretty spectacular, wouldn’t you agree?

The village of Saint-Guilhem stretches along the narrow valley of the Verdus river, the houses lined up one next to another.  As you walk along the main street, from the bottom of the valley, the houses appear to tower above you, and there’s little sky to be seen.

But there are many things to admire other than the blue sky!  Along the streets there are a number of fountains, all of them running with fresh water.

Then there are the thistles, which are fixed on many front doors:

In the old days the thistles were collected and eaten, much as we eat artichokes today.  Over time they have become rarer, and today they are used to foretell the weather: when it’s sunny the petals are wide open, and when it’s due to rain the petals will curve in.  I imagine that’s due to the change in humidity?  You can see that it was definitely sunny on the day of my visit! 🙂

Scallop shells were also in evidence on many buildings — due to the fact that Saint-Guilhem used to be a stopping point on the pilgrims’ route to Santiago de Compostella.  The scallop shell marked a place where the pilgrims were welcome and could stop for the night. 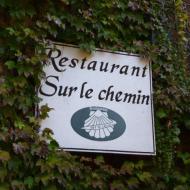 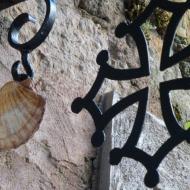 A small street branched off the main street and ran along the Verdus river.  There were many little cascades, burbling away.

There is a sense of drama when you first catch a glimpse of the abbey with the church ahead and above you. 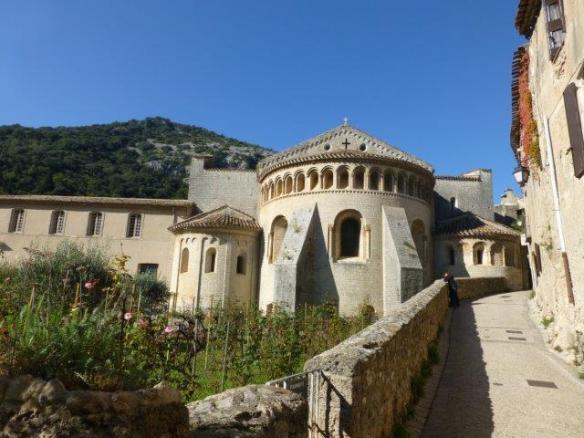 The buildings are beautifully simple, and yet incredibly impressive.  As you get closer you notice the details.

The foundation of the abbey dates back to 804, when Guilhem of Orange, a cousin of Charlemagne, decided to give up his warrior life and devote himself to God instead.  Charlemagne donated a piece of the true cross, and in time the abbey prospered and became an important place of pilgrimage through the middle ages.  The present day church was built in the 11th century in the romanesque style. When I first entered the church I was struck by the starkness of it — it is almost completely devoid of any decorations.  Initially it also felt very dark. 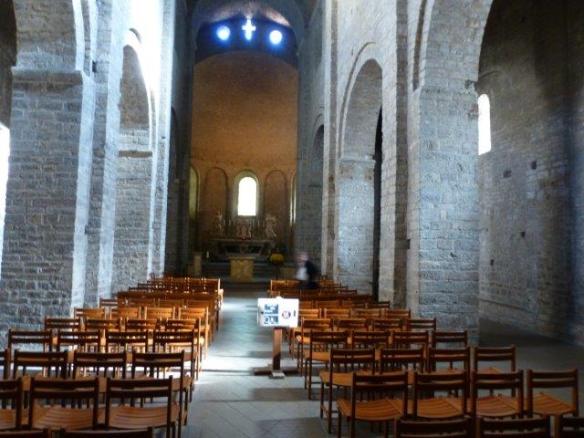 But as my eyes got used to the light levels, I found it to be a very peaceful place.  The stone vaulting in the chapels on either side of the apse are amazing to contemplate.  The three windows high above the main altar are representative of the Holy Trinity.  The organ dates from 1789 and was built by Jean-Pierre Cavaille, the grandfather of the celebrated organ builder Aristide Cavaille-Coll.  You can read more about the instrument (in French) here. 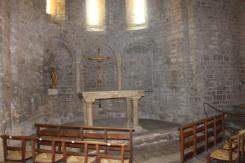 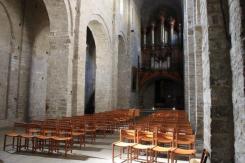 Fast forward to the French revolution, when the abbey church became the parish church of the village, and the other buildings of the abbey were sold off.  One part became a spinning mill, another part a tannery.  After a devastating flood in 1817 the abbey buildings were used as a quarry of sorts, with the cut stones being used in the village and further afield.  The beautifully carved columns and capitals of the cloisters ended up scattered all over the area.  There is precious little left of the cloister, which was once the jewel of the abbey. 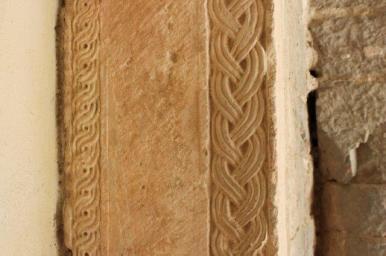 Imagine a cloister on two stories, with an amazing variety of columns and capitals.  Here is an impression of what it might have looked like:

Pierre-Yon Verniere, a justice of the peace in nearby Aniane, had a passionate interest in romanesque art.  He managed to amass a collection of 148 pieces from the cloister in Saint-Guilhem, which were apparently used as decorations in his garden.  After his death in 1875, his children sold the collection, and it was eventually acquired by the American sculptor George Grey Barnard.  George Grey Barnard’s collection is today at the core of the Cloisters Museum in New York, and if you are ever there you can see the amazing work of the medieval stonemasons.  For now, you can see a little part of it, virtually, via this link.

Today some of the former abbey buildings are occupied by Carmelite nuns, who hold regular services at the church.  Just as I was about to leave the church, a group of Germans (perhaps pilgrims?) started to sing — the acoustics were wonderful, with the sound all around me.  I took a brief video for you (e-mail subscribers, please visit https://midihideaways.wordpress.com/2014/11/04/saint-guilhelm/ to watch the video).

The square outside the abbey is in great contrast to the atmosphere of peaceful contemplation inside the church.  There is a huge plane tree in the centre, planted in 1855, and all around are cafes and restaurants.

On the fountain next to the tree, someone from one of the restaurants had lined up water carafes, in readiness for the midday midday meal.

We had a delicious lunch at the Taverne de l’Escuelle, just off the square.

There was gardiane de taureau, a tasty beef stew, an omelet with wild mushrooms; a chicken salad; and tartiflette, a combination of cooked, sliced potatoes, bacon pieces, onions, reblochon cheese and creme fraiche — can you guess what I ate??  For dessert there were sweet crepes!! 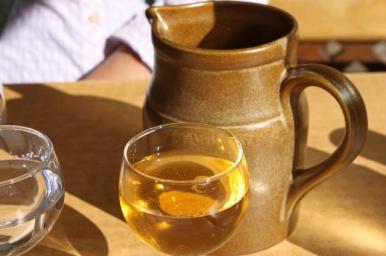 If you want to see Saint-Guilhem-le-Desert for yourself, I would recommend that you visit out of season.  The car park is fairly large, but as we left, it had filled up considerably.  Plan on spending the day, or combine your trip with a visit to nearby Saint-Jean-de-Fos and its pottery museum and studios.  More about that in another post soon!

Oh, I almost forgot — I know that some of you will be asking: “Why Saint-Guilhem-le-Desert?”  The desert was a place of spiritual retreat, harking back to the early Christian monks who lived in the Egyptian desert.  It could also relate to the fact that when Guilhem established his monastery the valley was very much remote and deserted.

5 thoughts on “The abbey in the desert”