You may have read the post about my visit to Castelnaudary a couple of weeks ago – if not, you can find it here.  One of the friends who came to Castelnaudary with me is a potter.  For years I had been wanting to visit a rather mythical pottery not far from Castelnaudary, so that day was the day!!  After our lovely lunch, we left Castelnaudary in the direction of Mas-Saintes-Puelles, a small village west of Castelnaudary.  We crossed over the Canal du Midi, then we crossed under the A61 motorway, and finally we arrived in Mas-Saintes Puelles.  We had come to visit Poterie Not Freres, but except for the village I had no address.  The pottery is rather well-known: as we arrived in the village we saw a signpost for the pottery, followed by a second one a little further down the road.  The signs put us on a road which left the village, and went, seemingly, into the middle of nowhere.  We crossed under the motorway again, and then over some railway tracks.  Our excitement grew when we spotted a fairly squat and sturdy brick chimney in the distance – we were on the right road after all!!  Finally we arrived at Poterie Not Freres!  The pottery is right by the Canal du Midi and very close to a lock.

Our arrival was not long after the end of the lunch break, and except for one other couple we were the only ones there.  To step inside the workshop was to step back in time – a time when there were no plastic containers or non-stick pans, and when people would use their pottery dishes every day. 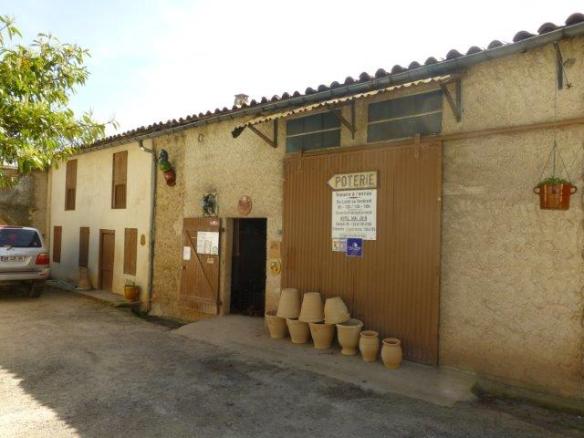 Behind that open door lies a room which is dominated by the enormous wood fired kiln, which has a capacity of 40 cubic metres!  Just that morning, the kiln had been emptied, after cooling down for three weeks.  It would have been wonderful to see all the pots being taken out!  In the picture below you can just see the doorway into the kiln and the hood, hanging down in the centre of the pictures, is above the fire pit.

All around us, pots were stacked up to dry.

These were all garden pots, more or less ready to be loaded into the kiln for the last firing before the summer.  It takes great skill to load such a wood fired kiln – a large part of the success of the entire operation depends on it.  The kiln is fired for 36 hours using only wood, to reach a temperature of over 1000 degrees.  The fire-box is then walled up and the kiln left to cool.  Here is what the pots look like once they are finished:

The garden pots only form a small part of the output though. All in all, the pottery produces around 500 different models of pots, and 80% of the production consists of cassoles, the traditional dish in which cassoulet is cooked, and from which the name cassoulet derives.  Here’s a look at some of the wares for sale: 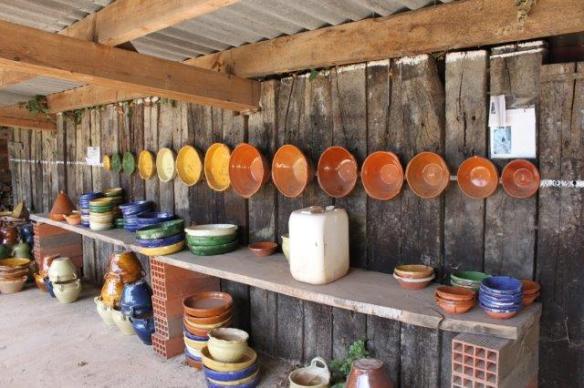 The finished garden pots are impressively stacked outside.  The visitor season had not yet started at the time of our visit, so the pots were stacked high.  By the end of the summer most of the pots will have been sold. 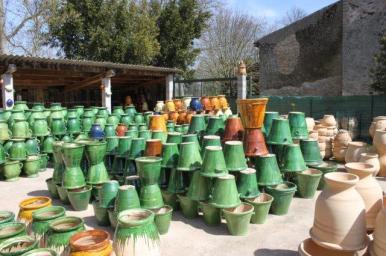 I was particularly intrigued by this pot, which had holes in it and a lid on top.  It took a little while before the penny dropped.

It’s a snail pot!  Of course, the snail on it was a give-away! 🙂  The snails are collected and put in the pot.  The lid stops the snails from escaping and they have air while they purge, before being cooked.  They are supposed to be delicious…

Back inside there were pots everywhere.  In a corner were some old-fashioned money boxes, the kind which have to be smashed to get at the stash!  I like that idea!! 😉

Eventually we got to the workroom with the potters’ wheels, where the action was just about to begin.  The pottery by the Canal du Midi at Mas-Saintes-Puelles was started by the Perrutel family in the 19th century.  In 1947 Emile Not took over the pottery in partnership with his brother-in-law, Francois Gleizes.  Emile Not’s two sons started to work in the pottery when they were old enough, and today the third generation is also working at the wheels.  The work area has changed very little over time.  There are four wheels, each with a window in front of it.

Clay is brought in on a sack cart – each block weighing 20 kilos.  With the help of a wire, the block is sliced into smaller pieces, and then the clay is turned on the wheel into whatever shape the potter is making.  I took a few videos for you to watch – probably easier than trying to explain the process (e-mail subscribers, please visit the website to view the videos):

I have also found two videos in French, which give a good idea of the whole manufacturing process.  The second video shows the firing of the large wood fired kiln:

The big kiln is used almost exclusively for the garden pots; for the other items there are two gas fired kilns, which are fired on alternate days.  This is hard, physical work, and whilst some of the work is the same day in day out, no two pots are ever identical. 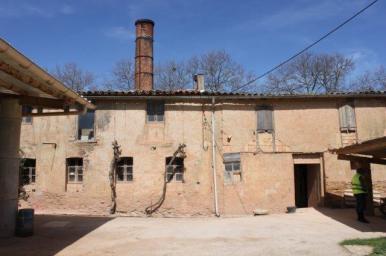 The clay is prepared in the yard behind the workshops.  The fact that there is a clay seam just outside the door, must have determined the location of the pottery.  The clay extracted here is of a beige colour;  a red clay is extracted at another quarry at Issels, not far away.  The clay is left to dry on a concrete slab in the yard, and once dry it is broken up with steel rollers. before being milled to a fine powder.  The clay powder is then mixed in various proportions with grog, depending on what kind of pots are being made.

This basic clay mix is then put into a machine which is definitely from the early 20th century.

Great big teeth work away at the clay inside the machine, mixing and kneading it, to make it supple and pliable.  Great big lumps of it drop from the mixer into the next machine, a pug mill, which compacts the clay and removes as much air as possible.  The pug mill extrudes the clay in a long block, which is then cut with a wire cutter.  The resulting 20 kilo blocks are loaded into a wheelbarrow and transported to the store-room next door.  This process happens every other day, and thousands of kilos of clay are prepared this way each year.  Here are two more videos for you:

The pottery produced by Poterie Not Freres has a very honest, down-to-earth feel to it.  There is nothing fancy whatsoever about the pots.  You could call it rustic, coarse or even crude, but it has a goodness that will improve with use and age.  I was tempted by many things, but in the end I came away with a small, round, yellow gratin dish, which is delightful to use.

I leave you with the opening times of the pottery.  You should visit this place if you have even the slightest interest in potteryl!  Be warned though, it is very tempting to come away with more than you can take home :)!!