For as long as I can remember, the festive season has been synonymous with light for me.  In Germany, the nights draw in very early around Christmas, and the festive illuminations make those dark nights brighter.  I grew up there, in the days before everybody had electric lights on their (sometimes artificial) Christmas trees – we had real candles on a real tree.  I would only lay eyes on the tree on Christmas eve, when the candles were lit as if by magic (my parents never appeared to have anything to do with that!!), and the whole tree was sparkling with glass ornaments, tinsel and sparklers.  At the time you read this, I will be decorating my own tree, with tinsel, glass ornaments AND electric lights!  As I am writing this post before that tree will be trimmed, I won’t be able to share any photographs with you, I’m sorry!

But I do have some other photographs to share with you – I visited Montpellier very recently.  On my meanderings through some of the narrow streets, I passed by the entrance to a church, which had in the past always been locked.  That day the doors were wide open, so I had to have a look in – and I’m very glad I did!  The church was the Chapelle des Penitents Blancs, the chapel of the white penitents. This lay brotherhood was founded in Montpellier in 1517.  In 2013 it had 49 members, aged 25 to 103 years!  The chapel, which dates from the 17th century and earlier, serves as their headquarters. 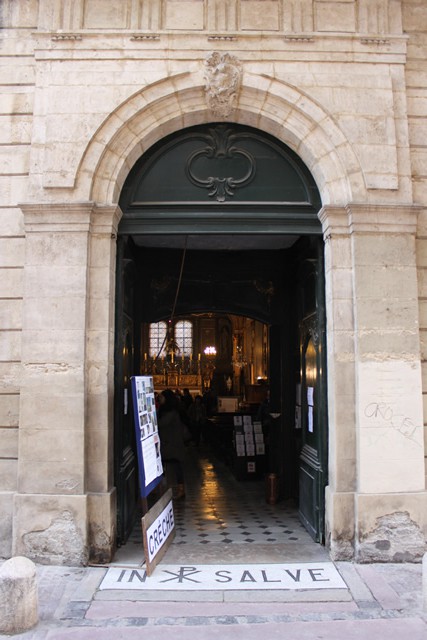 The interior is richly decorated, with much gold leaf in evidence.  Parts of the decor have been restored, whilst other parts are still awaiting much needed work.

On the balcony at the rear of the chapel are two mannequins, dressed in the traditional white robes of the penitents.

There was a reason why the chapel was open to the public that day:  the very large Provençal creche or nativity scene! 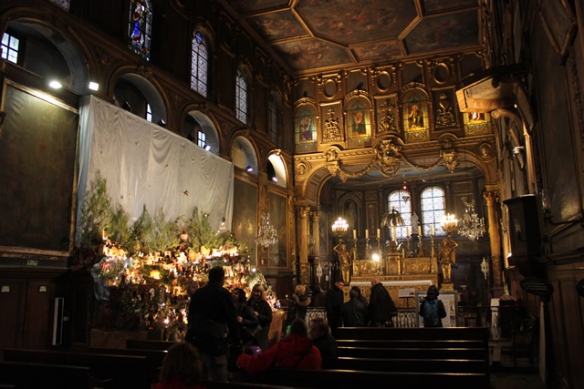 The popular Provençal nativity scenes appeared during the French Revolution, when la Terreur had closed churches and forbidden worship.  In 1793, at Christmas, people in Marseille started to make small figures, which could easily be hidden in case of police checks.  They used clay, paper, the white of a loaf of bread – whatever was to hand.  The figures represented the faithful, who could not go to midnight mass.  They were given the names santouns, little saints in Provençal. Today they are usually called santons.

The tradition became very much part of Christmas in Provence, and spread to Languedoc too.  In 1803 a santons fair was held in Marseille.  The traditional costumes of today’s figures hark back to the days when the santons were first made. 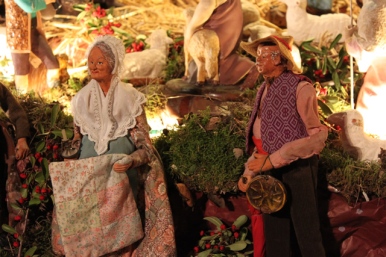 Did you notice the chapel with the white penitents?  And did you notice that baby Jesus was missing?  He will be placed in his crib with great ceremony on Christmas eve!

This year, the Christmas market stretched from the Place de la Comedie all the way down the Esplanade Charles de Gaulle – there were over 100 stalls in all!

There was a nice assortment of edibles: 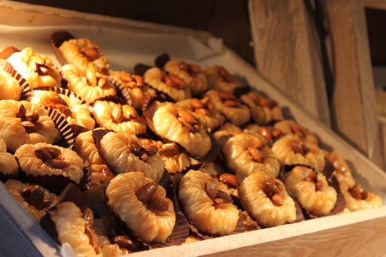 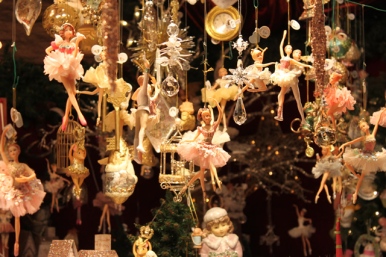 Note how I have far more pictures of food 🙂 – somehow I’m drawn to that!!

This will be my last post for 2015, and so I would like to wish all of you and yours a wonderful festive season!!  See you again in the New Year!