What do most people think of when they hear the word Albi? Perhaps that it was the birthplace of Henri de Toulouse-Lautrec,  or the Albigensian crusade against the Cathars?  I think of a fortress-like church.  I recently went back to Albi for another visit.  Construction of the cathedral, for that is what the fortress-church actually is, started in 1282, at the end of the persecution of the Cathars.  The massive building was designed to intimidate and impress, to show the domination of the Catholic church over its surroundings. 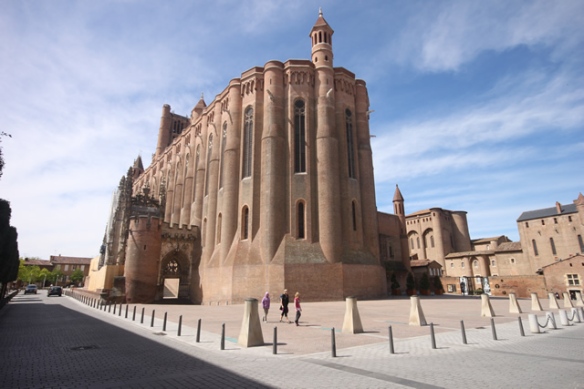 It is very impressive, wouldn’t you agree?  The building is in a style called Meridional Gothic, distinctly different from the Northern Gothic style which gave us cathedrals such as the ones in Chartres, Rouen or Notre Dame de Paris.  The whole shell is built entirely of brick, and there are no flying buttresses – instead the semi-cylindrical abutments on the outer walls transfer the weight of the vaults to the massive foundations.

It took over 100 years to build the shell of the building, and the massive belfry was only finished in 1480, almost 200 years after construction began!!  The belfry is 78 metres high! 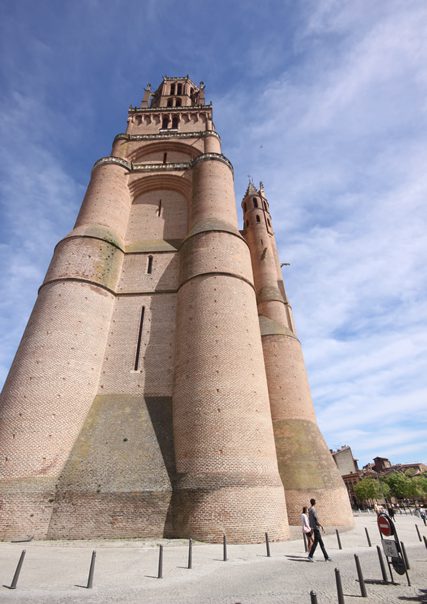 The cathedral is the largest brick-built cathedral in the world, an impressive 113 metres long, by 35 metres wide!  It totally dominates the old town, which of course was the aim. 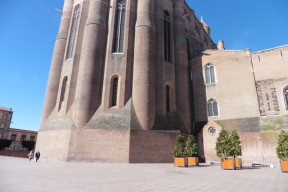 The fortress aspect of the exterior includes details of military architecture, such as the observation tower below: 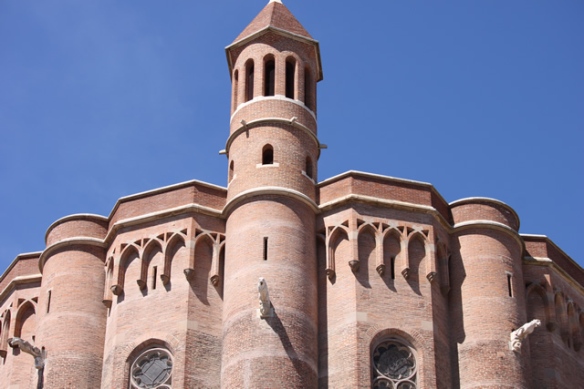 There is hint of the more well known northern gothic style in the monumental porch on the southern entrance.  Unfortunately this was undergoing some restoration, so it isn’t all that visible. 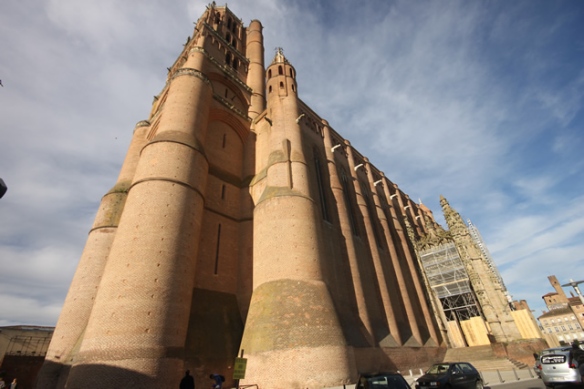 The interior of the cathedral is in stark contrast to the exterior.  Where the brick walls on outside carry no decoration, inside the church not a single square inch remains undecorated! (Or the inside of the church is decorated to within an inch of its life??) 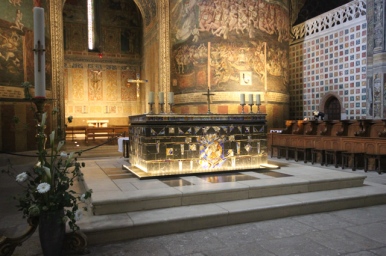 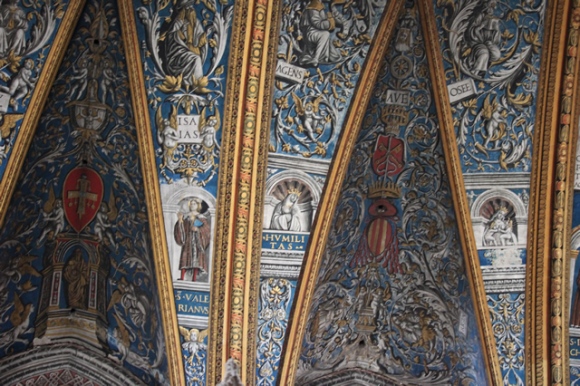 The decorations on the vaults were painted by Italian artists between 1509 and 1512.  On a blue and gold background, the ceiling depicts the promise of salvation.  The west wall, below the organ loft, is taken up by a monumental depiction of the last judgement, painted by Flemish artists from 1495 to 1500.  Unfortunately, at one point a door was cut into this wall, which meant that the central portion of the painting was lost!  The paintings were a way of instructing a populace which was largely illiterate and/or did not know enough Latin to read the Bible.

The painted walls have not been restored (read re-painted) since they were finished.  Some of the walls have been cleaned, removing centuries of dust and grime, and the difference is noticeable.  On the very right you see a wall which has not been cleaned – the colours are incredibly vibrant on the cleaned walls!

The rood screen and the choir enclosure are in the flamboyant gothic style and were carved by the best craftsmen of France during 1477 – 1484.  The detailing is incredibly fine and ornate!  The statuary on the exterior of the enclosure represents the Old Testament, whilst on the inside, characters from the New Testament are depicted.

The walls above the choir stalls are decorated with angels, and the fields between the angels are painted with mythical creatures.

A few of the angels have lost arms, but all of them have their heads.  And there seems to be something missing from the canopies which are in between the angels – but what? 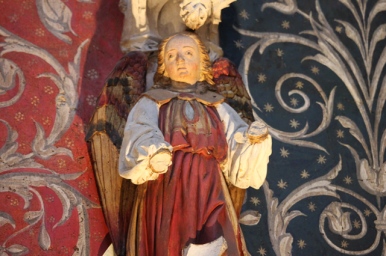 And here is a statue of Saint Cecilia, the patron saint of the cathedral:

I hope I’ve shown you enough of the interior of the cathedral to make you want to visit it for yourself!!  From Saint-Chinian, Albi can be reached by car in just under two hours – it makes for a good day trip.

The cathedral of Sainte-Cecile is an amazing work of art – do allow yourself enough time to explore it. An audio guide is available, which offers good explanations of the interior of the church.  From the tourist office, the Albi City Pass is available, which is a day pass for the Cathedral and the Toulouse-Lautrec museum, located in the former archbishop’s palace.  The pass also gives reduced entry to a number of other museums and attractions in Albi.

I’ll write about the palace and the Toulouse-Lautrec museum in due course – promise!!

8 thoughts on “Austerity and splendour”