… red and pink.  No this is not what you were thinking!  This is a little dip into the colourful world of flowers in my garden and in the area.  There is such an abundance of flowers at this time of year –  I thought I would try and stick with a theme for this post: flowers which are predominantly red and/or pink.

So here we go:

The following flower is a gaillardia, which blooms endlessly in my garden here in Saint-Chinian.  It needs no water and flowers until the first frost!

Roses are wonderful this year!!  We seem to have had the right amount of rain at the right time! 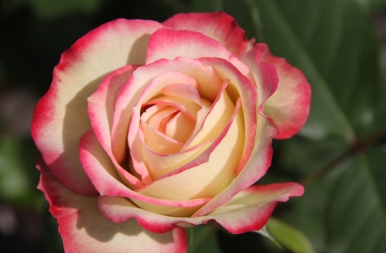 The gerbera below is a relative of those expensive flowers which you can find in florist shops everywhere. 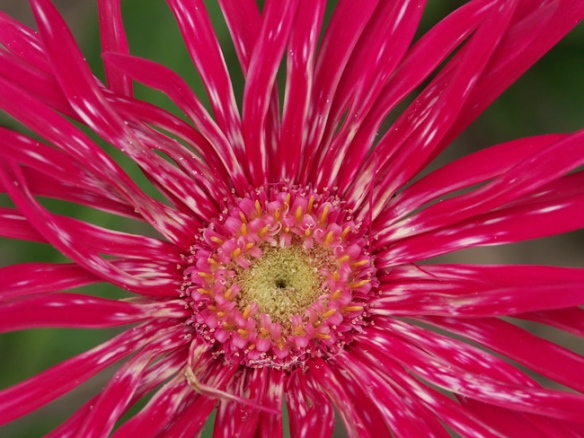 Red flax is really wonderful, a mass of it can make for a real splash of colour!

Here is another selection of pink flowers:  Echinacea, cistus and dicentra spectabilis. The last one is commonly known as bleeding heart.

Cosmos is another wonderful flower, needing very little care – it even sows itself in my garden! 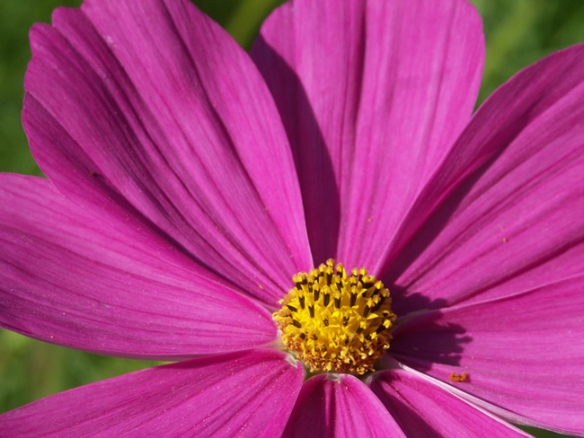 And to finish off, some red oleander:

If you want to see for yourself, why not come and visit Languedoc?  I’ll be happy to help with your accommodation and travel plans.

On one of my recent flea market forays, I found these lovely porcelain dishes – they just called out to me from their crate!  They weren’t all that expensive so I bought six!!

With the cherries in season, it was time to put the dishes to work.  I had a feeling that they would be the perfect size for an individual cherry clafoutis.  You might have heard of clafoutis – it is a kind of flan, traditionally made with black cherries.  I had some red cherries, but I thought they would work just fine too! 😀

The basic ngredients are very simple: cherries, cream, milk, eggs, sugar and a tiny bit of butter to grease the dishes. 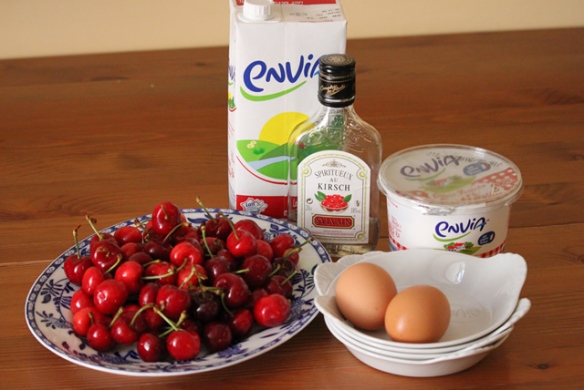 Here’s a completely gratuitous picture of the cherries in one of my new dishes:

The cherries can be pitted or not – as you wish.  Traditionally the stones are left in the cherries, as they are supposed to release some additional flavour during cooking.  To my mind, the advantage of leaving the stones in the cherries is that it makes for faster preparation.  The washed cherries are simply stemmed and arranged in the dishes – there are 17 cherries in each dish! 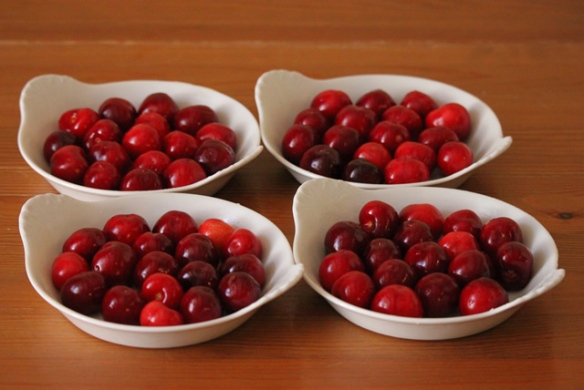 For the batter, the eggs are beaten with the sugar, then the cream, milk and kirsch are added.  Once all is well mixed the batter is evenly divided between the four dishes. 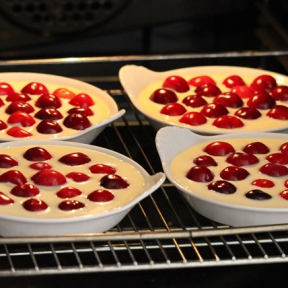 After 30 minutes the clafoutis should be nicely browned and puffed up. 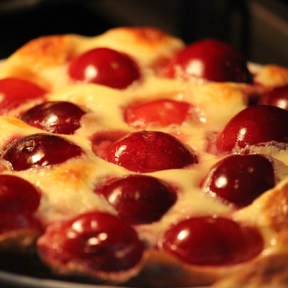 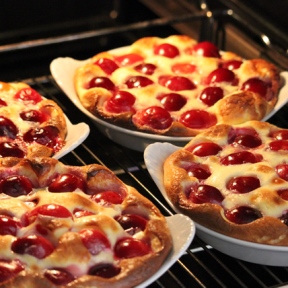 Now you just have to wait until the clafoutis are lukewarm, before you tuck in! 😀  The tops can be dusted with icing (confectioners) sugar, but I prefer mine without.  Bonne degustation! 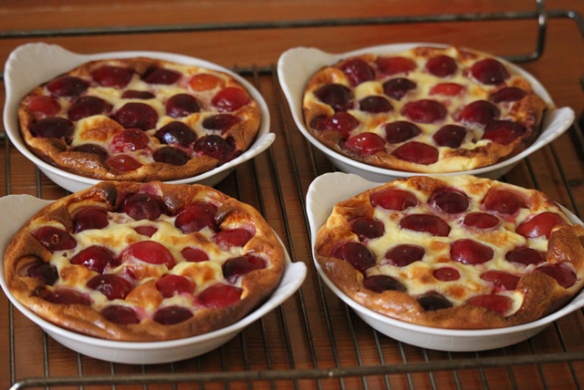 Pre-heat the oven to 185°C.  Butter four individual oven-proof dishes, just large enough to hold your cherries in a single layer;  my dishes measure 10cm across the bottom and 14cm across the outer rim.  You could also use a single (larger) dish, just be sure that the fruits fit snugly. A square baking dish, approx 23 x 23cm should work well.

Wash your cherries, remove the stems and decide on whether or not you want to remove the pits.  Arrange the cherries in the dishes.

Break the eggs into a mixing bowl; add the sugar and beat to mix well.  Add the creme fraiche, milk and kirsch and stir until well blended.  Divide the batter evenly between the four dishes and bake in a pre-heated oven for 30 minutes or until nicely browned, and puffed around the edges.

Serve lukewarm or at room temperature, dusted with icing sugar if you like.  This can be prepared ahead of time, but be sure to allow the clafoutis to come to room temperature before serving.

The town of Beziers holds a number of fetes and events throughout the year.  One such fete is called Les Caritats, and it takes place on May 5, Ascension day, which is a public holiday in France.  The history of Les Caritats dates back to mediaeval times.  One of the reasons behind the fete was apparently to raise money, which was then distributed among the poor.  Bread, which was blessed by the archbishop and the clergy of the town, was also distributed among the needy populace.

I went to this year’s edition of Les Caritats, to see what it was all about.  The day was sunny and warm, perfect for a fete!  A mediaeval ‘village’ had been set up on the Allees Paul Riquet, close to the municipal theatre.  The ‘camel, the totem animal of Beziers, was there too!

When I arrived at the fete, the communal meal was already in full swing.  A lady in flowing robes was entertaining the diners with a parrot display. 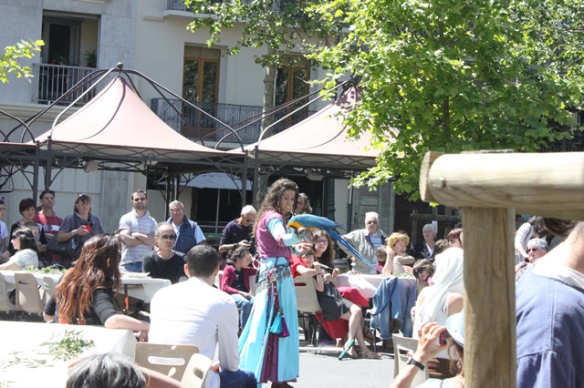 Farther down the square, a small farmyard had been set up, for the entertainment of old and young.  The animals didn’t seem to be in the slightest bothered about being on show. 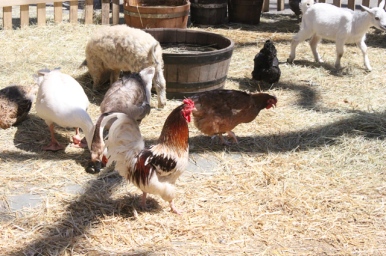 The mediaeval kitchen, where children could learn to prepare dishes from the period:

For the children, the biggest attractions were the games!  There was a great selection to choose from! 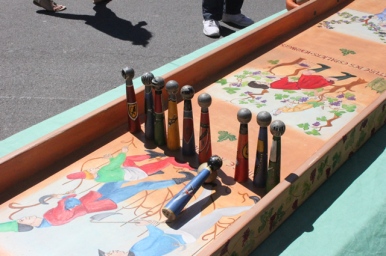 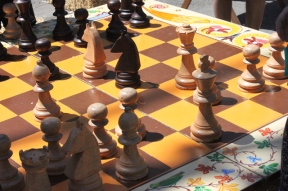 With such beautiful weather, a stroll around Beziers was a must.  I am always captivated by the wonderful facades which abound in this town!  It really must have been an amazing town to live in during its heyday in the 19th century!

If you visit Beziers, be sure to keep your eyes open for all the beauty – it can be found in unexpected places!

I wonder how many of you have heard of the French singer Charles Trenet?  If you haven’t heard of him, you have probably heard one of his songs, perhaps La Mer (Beyond the Sea) or Que reste-t-il de nos amours? (I wish you love).  Both songs have been covered by many artists – have a look for them on the net, you’ll find many of them!  Charles Trenet was a big star in France, and most people know the lyrics to some of his songs.

What the Wikipedia page fails to mention under the heading ‘Early life’, is that Trenet’s father was the notary in Saint-Chinian at the time Charles was born.  Although he was born in Narbonne, little Charles spent his first years in Saint-Chinian, where he took piano lessons from a local music teacher.  The house where the Trenets used to live, is today the Maison des Vins and the veterinary practice – at some time it was divided into two. 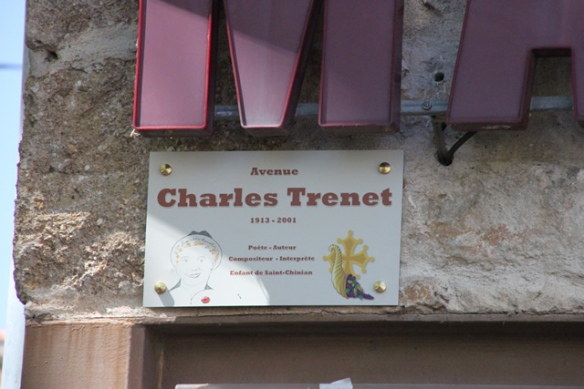 The re-naming ceremony took place outside the Maison des Vins, one recent Sunday.  The sun shone, and the atmosphere was festive!  Part of the ceremony was the induction of three of Charles Trenet’s collaborators into the Confrerie des Chevaliers du Saint-Chinian, the Fellowship of the AOC Saint-Chinian. 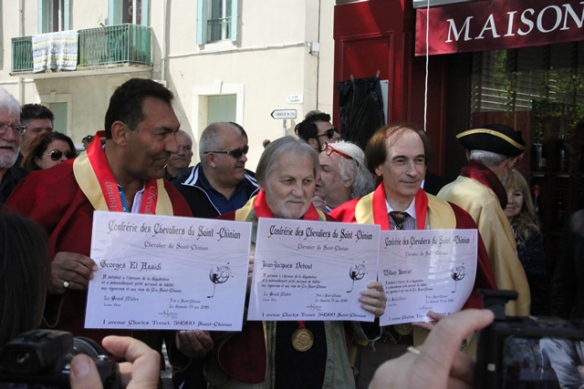 Of course there was an aperitif after the official business had been completed! 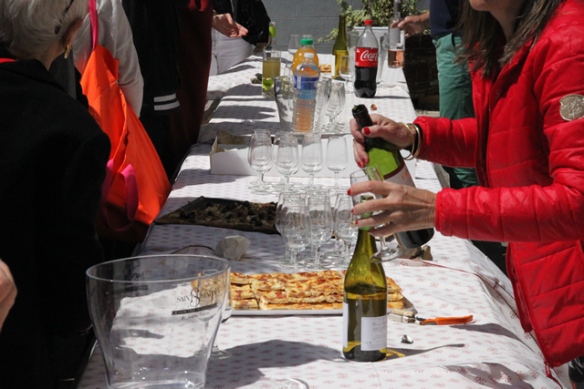 The “festivities” continued in the abbatiale, the former abbey church.  Here a monumental picture of Charles Trenet was unveiled, hanging on the end wall.  It looks impressive, doesn’t it?? 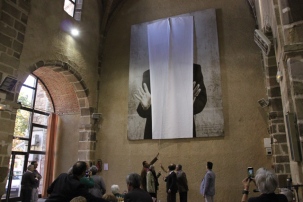 Jean-Pierre Tutin and Jean-Jaques Debout, both of whom knew Charles Trenet very well, were playing some of the Trenet repertoire, while the rest of us snacked on cheese and apple cake. 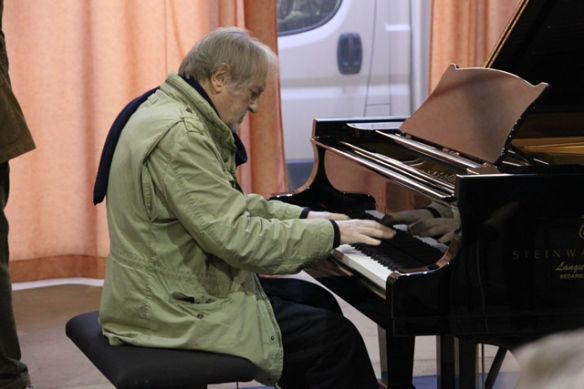 You’ll be able to hear Jean-Pierre Tutin in Saint-Chinian later this year, on July 7, 2016, during the music festival.  He will be playing and singing music by Charles Trenet.  I’ll write more about the music festival in due course, once the programme is finalised.

The last event of this day of celebrating Charles Trenet was in the parish church in Saint-Chinian.  Here a recital of the music of Charles Trenet was played on the organ by William Henriet, another Trenet collaborator.  Hearing 20th century music played on an 18th century organ was interesting – let’s leave it at that! 😀

All in all, a great day, and I’m sure there will be more events in Saint-Chinian with a “Trenet” theme.