… or does it?  Some of you may know that I recently started my 51st year, but I’ve not noticed much difference. 🙂  Having said that, any round birthday is a good reason to celebrate.  I was very lucky to have good friends with me to mark the occasion in a rather spectacular manner:  a trip to El Celler de Can Roca in Girona, Spain.  Girona is only a  two hour drive from Saint-Chinian, and the restaurant has been voted Best Restaurant in the World, and has been given three stars by the Guide Michelin.

I’m not really in the habit of going to three star restaurants – the trip to Girona came about by chance rather than design.  I was sitting with my friends one evening, and we were talking about how difficult it was to get reservations for El Celler de Can Roca – bookings have to be made 11 months in advance, and the tables are usually booked very very quickly!  Flippantly I said, “Why don’t I e-mail the restaurant to see if they have a cancellation over the next few days?”.  I received a fast reply to my e-mail, and the next morning we had a reservation for the following week – never in my wildest dreams had I thought that it would happen!!

The restaurant is in a very unprepossessing neighbourhood of Girona.  Its interior is very modern and pure, and the dining room is arranged around a triangular lightwell, which is planted with trees.  The tables were spacious and beautifully set with white tablecloths, starched linen napkins, Riedel glasses and silverware.  I felt far too self-conscious to take pictures of anything but the food, although the atmosphere was in no way ‘starchy’.  The staff were all very friendly and incredibly professional, and the service was smooth and unobtrusive – the restaurant was running like clockwork!!

After we had sat down, we were served a glass of cava, with compliments of the house, while we perused the menu and the wine lists.  The choice of menu was easy – there were only two, and since this was probably a ‘once-in-a-lifetime’ experience, we opted for the tasting menu.  Half our table ordered the wine pairing – a different wine with each course – fourteen glasses!!  Luckily the glasses were not very full!

I leave you now, with the photographs of the meal – it was a fantastic dining experience, and a brilliant start to my 51st year! 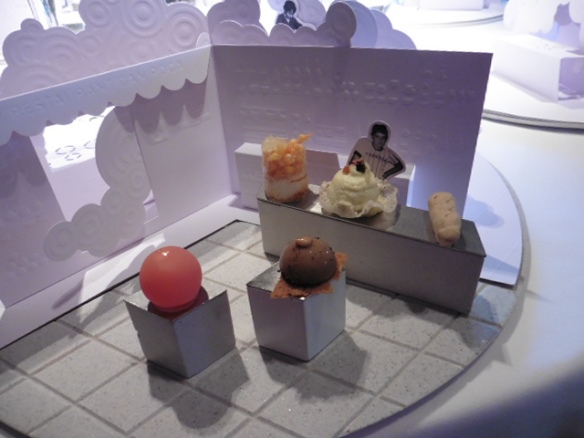 Memories of a bar in the suburbs of Girona: Breaded squid, Kidneys with sherry, Pigeon bonbon, Salt cod with spinach and pine nuts, Campari bonbon 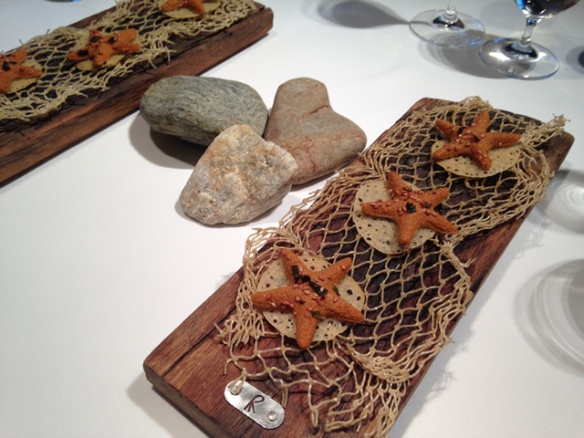 Here is where the main courses start:

Cherries marinated on a bed of cashew, smoked eel and “beurre noisette”

Tartar of tomato and watermelon 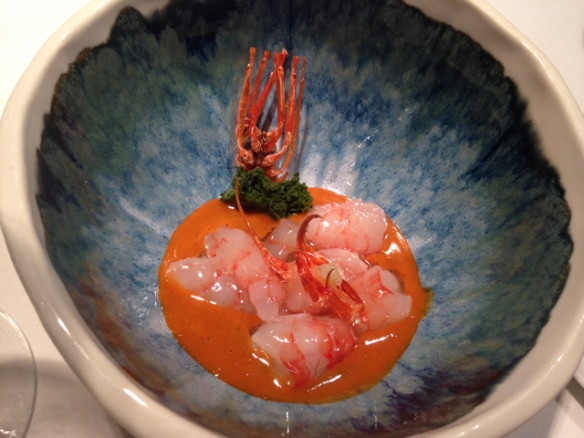 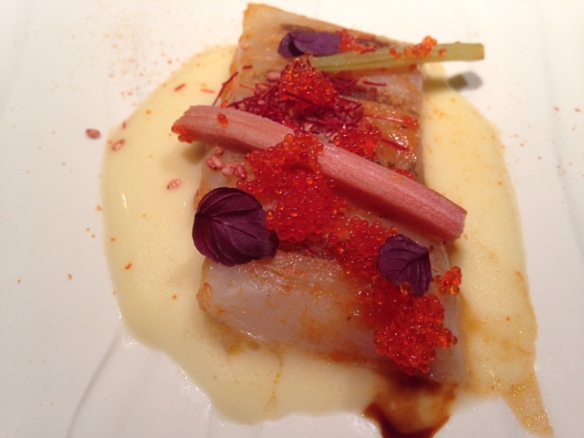 Red skate confit with juice of charcoal-grilled pepper and rhubarb

We are now starting with desserts!!

Just when we thought there was no more to come…. 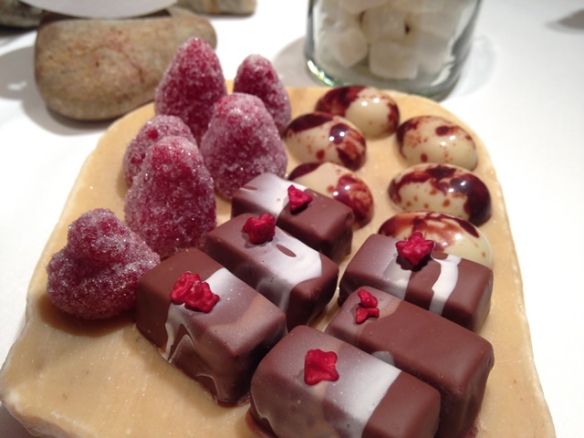 Once again I am speechless.  What should have been a day of national celebration has been turned into a tragedy.  Scores of people are mourning loved ones, and many more have been traumatised by the events in Nice.  My sympathies and prayers go to all those who have been affected by this senseless act of terrorism.

I know that I’ve not been writing much about food in recent weeks.  This post aims to rectify that, but a word of warning: if you are hungry, then close this window immediately, and do not look at this post again until you’ve had something to eat.  Otherwise, I cannot be responsible for anything which might happen!! 😀

Over the years I’ve been to La Cave Saint-Martin in Roquebrun numerous times, and I’ve written about one of my meals there a few years ago.  I thought it was time that I shared another visit to that restaurant with you!  La Cave Saint-Martin is a wine and tapas bar, which serves a selection of more substantial food along with the tapas.  The wine selection is heavy on vins naturels, wines which have not had sulphites added.

I went there last week with a group of people, two of whom were on their first visit to Saint-Chinian.  Those two were also enthusiastic “foodies” and they were looking forward to trying as many different items on the menu as possible!  We looked at the menu and debated, and finally Raymond, the proprietor of the restaurant, put an end to our agony of choice by suggesting a kind of tasting selection – thank you Raymond!

We started with some wonderful saucisson:

You see the bread basket by the side of the plate – the bread comes from the bakery in Azillanet, run by Stephane.  I wrote about the bakery in 2013 – Stephane is still making wonderful bread!

Just when we got settled with a glass of red wine and the saucisson, another lot of treats arrived at the table!  Here is some tuna belly:

I’m not sure why the fish is served in the tins, with the wrappers by the side, but perhaps it’s to show the authenticity of the product?  Moving the fish to a serving plate could also make it break up, so that could be another reason?

The smoked anchovies were divine!!

Then there were some tiny sardines, which were lovely! 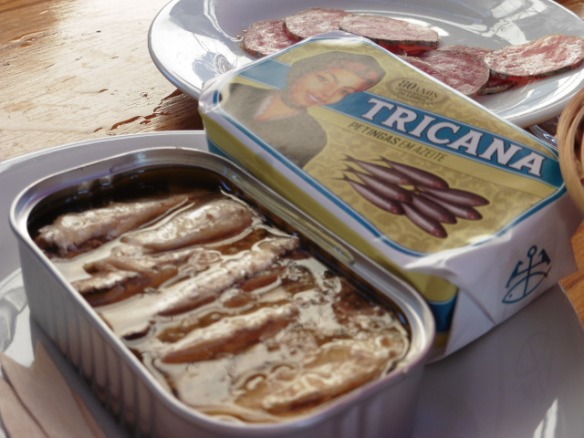 Raymond stocks a large selection of canned fish from a Portuguese brand called Tricana. The products I have tasted have all been very delicious!  Do give them a try if you ever come across them.

We also had some very tasty meats!  The restaurant always keeps some amazing Spanish Iberico hams in stock, and we had a plate with two different kinds:  lomo and lomito.

We also had some cecina, wafer thin slices of air-dried beef… 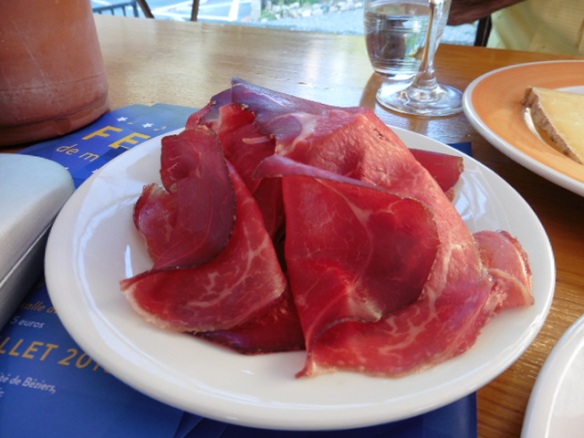 …and also the home-made pate de tete, which translates to “head cheese” or brawn.  Forget about the name, it tasted very good, and the pickles were the perfect accompaniment! 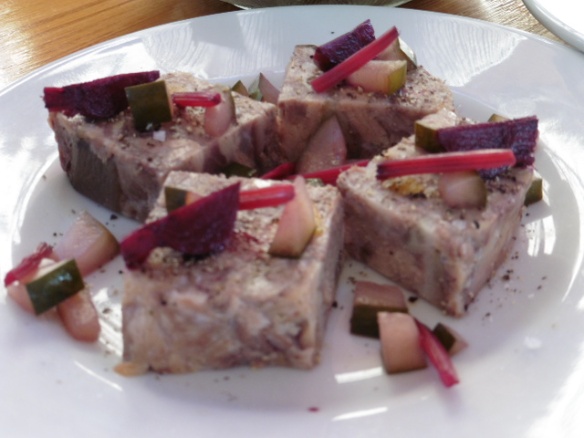 Instead of manchego we ate a Dutch cheese, whose name I cannot remember, I’m sorry!  It was a cheese to remember though, the mouth-feel (awful word, but describes it well) started off like a good parmesan, slightly crunchy with salt crystals, and then turned to meltingly soft, like a really good comte!  Just fabulous!

Have a look at the table!  We really were not short of food, but we took it easy and did eat up everything 😀!! 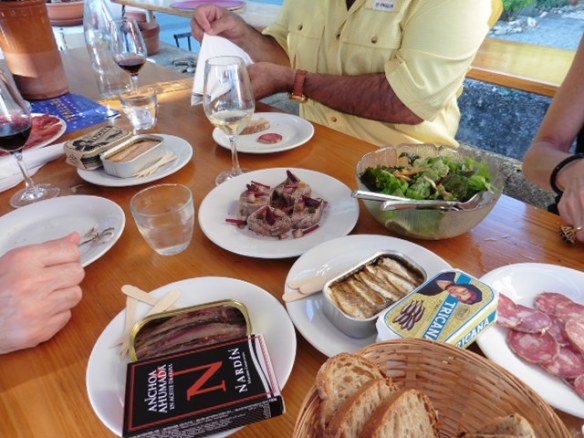 So far so good – all the above was really one huge appetizer!!  No, I am not kidding!!  Raymond had had a delivery of entrecote steak from his supplier. Beef from the Aubrac region of France, which had been aged for 30 days.  Here’s Raymond showing us the steak – it’s one big piece for all four of us, just in case you are wondering!

And here is what it looked like after it had been cooked to perfection:

And perfection it was!  I’m not a huge meat-eater, but from time to time there is nothing that can beat a well aged and well cooked steak!!

Summer is here at last, so here is an update to the page of upcoming events in and around Saint-Chinian:

Come and listen to one (or more) of the eight concerts, which are given in Saint-Chinian’s Abbatiale and the parish church. The programme is varied and offers a selection of different musical styles.  The festival opens with the children’s choir of Beziers Cathedral.  Amongst the concerts, there is an organ recital in the parish church, a tribute to Charles Trenet, a saxophone quartet playing jazz and more.  The full programme can be found on http://www.festivalmusisc.wordpress.com 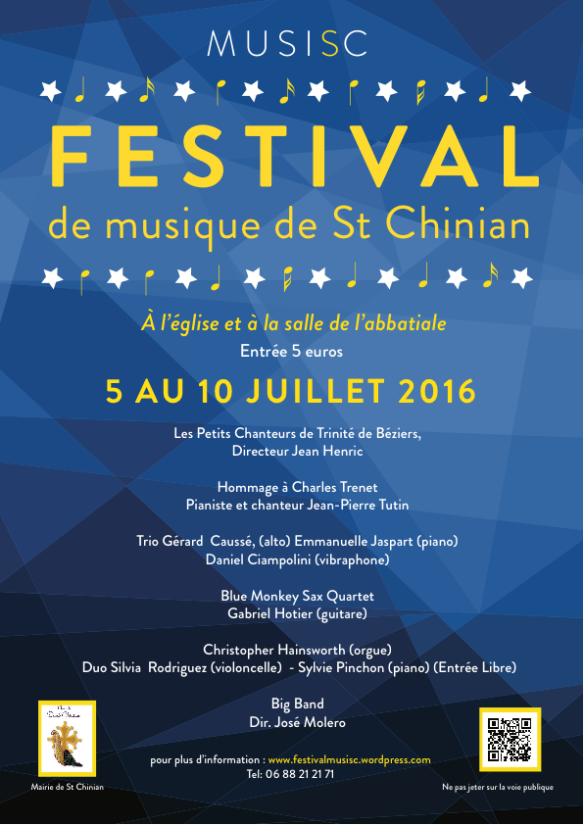 This internationally renowned Jazz Festival takes place in Sete every year, and is a must for lovers of Jazz!  This year’s festival is headlined by Diana Krall (already sold out!), but there are tickets available for many of the other performers.  The concerts take place in the Theatre de la Mer, an open-air theatre with the sea as a backdrop.  Details can be found here.

For the sixth time in as many years, Herve Hotier and Lauranne Chastal, with the collaboration of Pierre Courthiade, are running a week of classes for flute students.  A masterclass will be given by Juliette Hurel, 1st flute of the Rotterdam Philharmonic Orchestra.  The week ends with a recital at 5pm on July 22, followed by a concert by the students at 7:30pm.

This popular fete always coincides with the Fete du Cru in Saint-Chinian.  The theme is the olive and its cultivation, and there is usually a competition for the best tapenade, among other activities.  There will be lots of food to buy and eat there, and the atmosphere is always great!  You can read about my visit to this fete here. 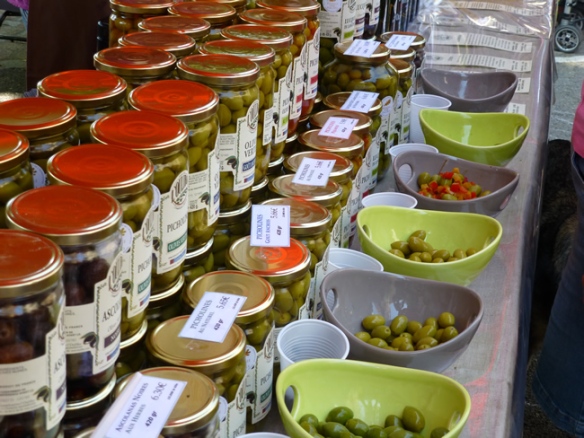 If you enjoy pottery then this event is for you – dozens of potters displaying their wares in the shade of plane trees!  I can always find something to buy at this kind of fair!! 😀 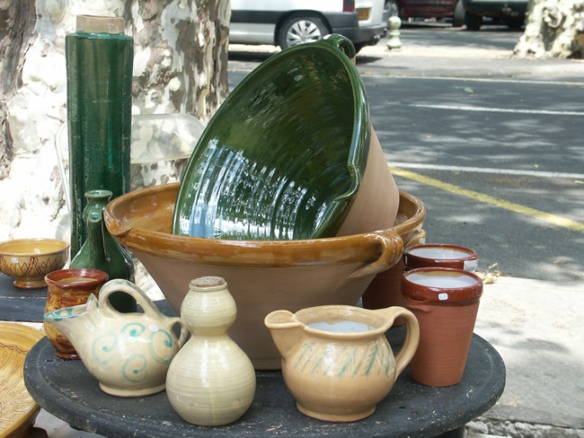 The Fete de St Louis celebrates Sete’s maritime heritage and its patron saint with six days of events.  There will be over 70 street performances, and there will be a big jousting tournamen.  The jousting is done on water and in boats!!

The chestnut festival in Saint-Pons-des-Thomieres is one of the biggest autumn festivals in the area.  It is well worth a visit, whether you like chestnuts or not!  I have visited this festival many times, and you can read my post about it here.

If you want to attend any of these events and are in need of accommodation, just drop me a line or visit www.midihideaways.com