Here’s to the start of another year – let’s hope that there will be more peace and less hate in the world!

What better way to start a new year, than with a post about wine-tasting!  Before Christmas, a friend asked if I would like to join her at a tutored wine tasting with food pairing – she had won two places for it in a prize draw!  “Of course, with pleasure”, I said without much hesitation.  The event was organised by the Herault Department in collaboration with the Maison des Vins de Saint-Chinian, the official showroom for Saint-Chinian wines.  The Herault Department organised a series of these events between September and January, in order to make the wines and foods of the region better known.

The tasting in Saint-Chinian was presided over by Thierry Boyer, a professional sommelier, who regularly hosts wine tastings in the area.  The food which was to go with the wine was prepared by Frederic Revilla of the restaurant Le Faitout in Berlou.  Here is the menu: 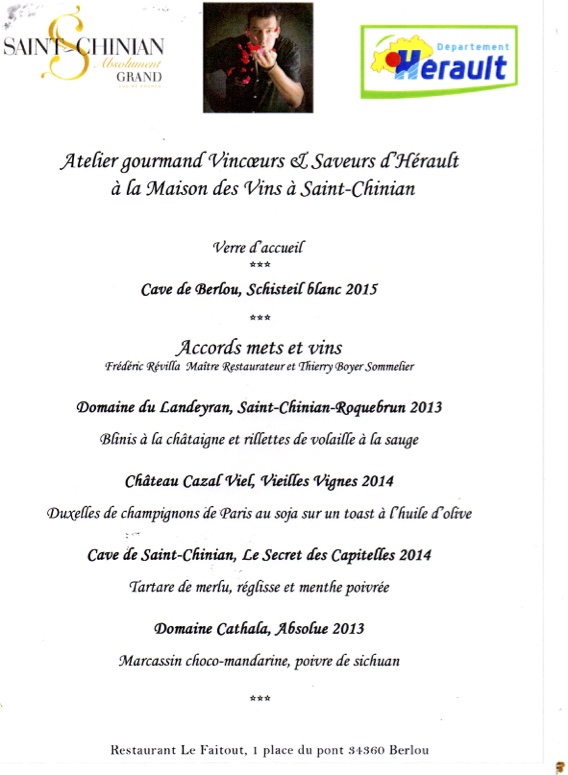 The evening started in the shop on the ground floor of the Maison des Vins, with a glass of white wine, whilst everyone signed in.  The wine was called Schisteil and came from the Cave Cooperative in Berlou.  It was perfect as an aperitif, a nice fruity wine, without too much acidity.

Once everyone had arrived, we were invited to climb the stairs to the second floor, where we were to spend the next few hours. 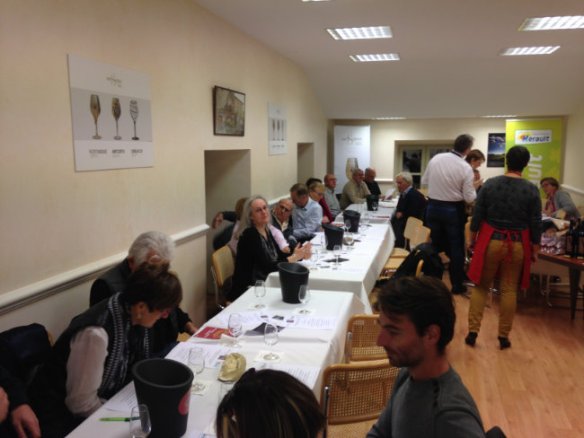 Once everyone had settled down, Thierry Boyer (below, far left) started the evening by introducing his co-hosts: Nellie Belot (far right), the director of the Maison des Vins, and Frederic Revilla (second from left), the chef of the Restaurant Le Faitout.  The lady with the red apron in the picture below was helping Thierry Boyer with pouring the wine. 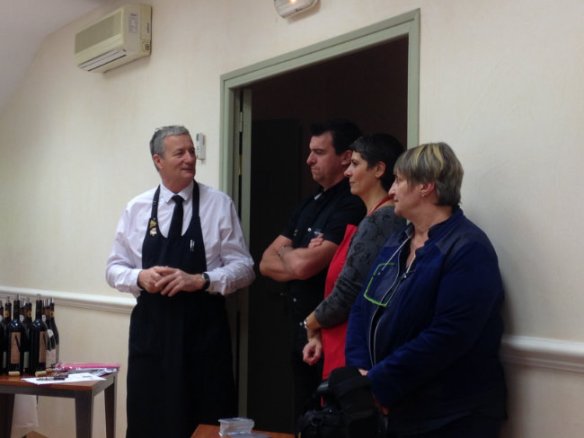 Once the introductions were made, Thierry started on the technical part of the evening, explaining the ‘art of tasting’ in some detail.  I’m no expert when it comes to wine tasting, and so this was all very interesting.  Each participant was given a tasting sheet, where notes could/should be made about various aspects of the wine, such as the visual aspect, the smell, taste and overall impression.  On the reverse of this sheet was an explanation of the words to be used in describing the wines.  All in French, of course, AND highly instructive!!

Once Thierry had finished his explanation, Nellie Belot took over to introduce the first wine, Domaine du Landeyran’s Saint-Chinian-Roquebrun 2013.  My notes tell me that the grapes for this wine are grown at Saint-Nazaire de Ladarez, on schist (slate) terroir, which produces relatively small yields of 30 hectolitres per hectare (1 hectolitre equals 100 litres, and a hectare is 10,000 square metres).  The wine is made with 70% Syrah grapes and 30% Grenache grapes, and spends one month in oak barrels. 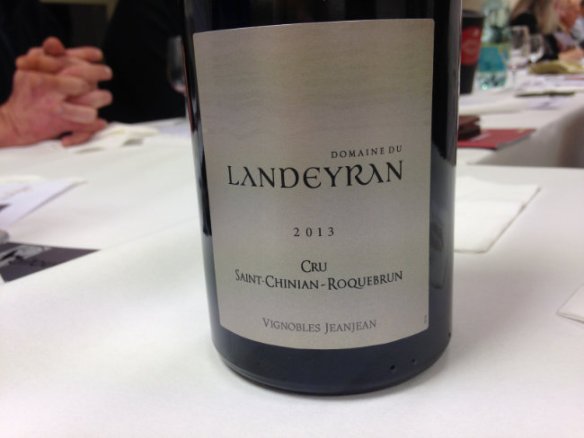 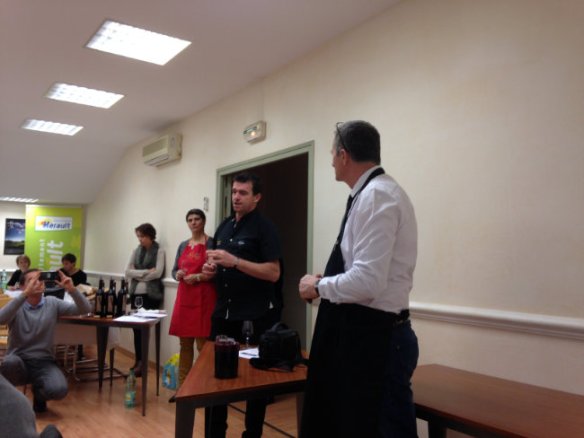 Finally, the wine was poured, and Thierry continued to teach us how to taste!  Take the glass by the base, so that your hand (which might be smelling of onion or garlic??) is as far away from the rim of the glass as possible!  Tilt the glass to the side and examine the colour and the clarity of the wine, as well as the colour of the “edge” of the wine, where the wine touches the glass as you look down into the glass.  Then we came to the “legs”, which are traces left by the wine on the inside of the glass.  Finally we were instructed to smell.  Once everyone had had a good sniff (the first nose), we had to swivel the wine in the glass and smell again – that’s called the second nose.  Agitating the wine causes some oxidation and brings out the smells more strongly. 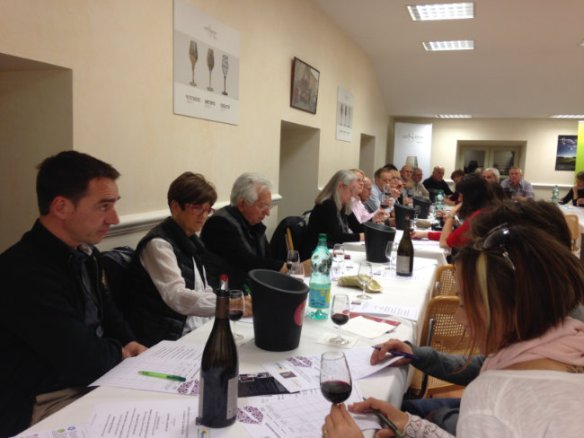 As you can see, everybody was doing this very seriously!!  After much sniffing and scribbling, we were allowed to taste the wine.  No, the idea was not to have a good gulp but to aerate the wine again, drawing air through it and making noises almost as if you were slurping noodles or some such.  The air causes still more oxidation, and brings out yet more flavours!  Once we’d had our first mouthful of wine, the blinis were passed around – one piece each.  I was so caught up in the tasting and note writing, that I missed taking a picture of it!  My note on the food says ‘super’!!  My memory of it is that it was very delicious, gone in a flash, and very good with the wine!  About the wine, my notes say very dark, almost black, a nose which was spicy, with red fruits and a hint of caramel.  The taste was a little tannic, and not too heavy.  Overall very nice, but I wasn’t blown away.

The next wine was Vieilles Vignes 2014 from Chateau Cazal Viel, near Cessenon-sur-Orb, was accompanied by a mushroom pate made with soya oil, on a toast which had been lightly brushed with olive oil.

This wine was made with Syrah, Grenache and Mourvedre grapes, and looked very dark, with very long legs. On the nose, I discovered red fruit and farmyard smells (those of you who remember the Food & Drink Show on BBC TV in the 1990’s may recall presenter Jilly Goolden talking of “bags of manure” 🙂 ).  Thee are all kinds of funny ways of describing the smells of wine – and manure/farmyard don’t mean that it tastes of that!!  In the mouth, the tannins were still somewhat strong, but the wine was generously fruity.  This is a wine which would be good to keep for a few more years, but which was very nice to drink now. 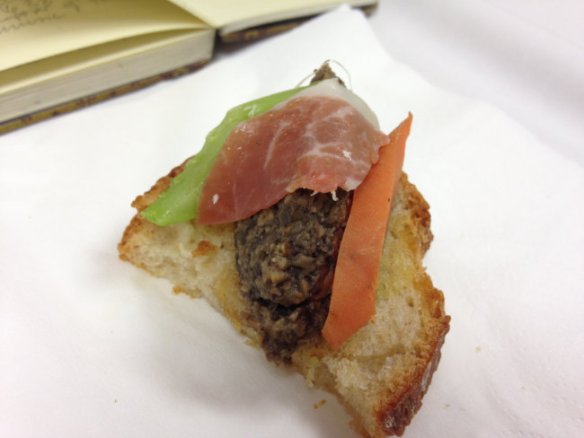 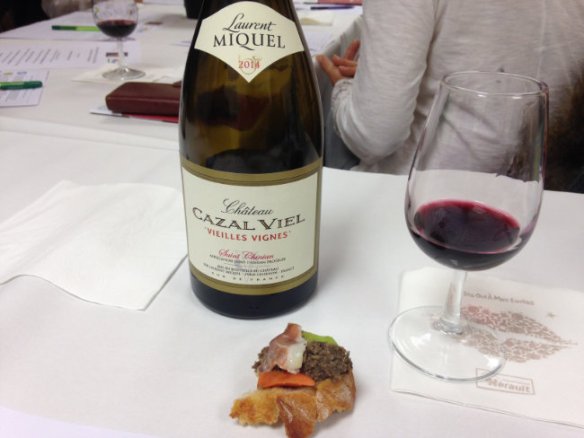 The mushroom pate was wonderful with this wine, and as you can see in the picture, the pate was topped with a little piece of mountain ham, as well as some celery and carrot, both lightly steamed.

The third wine on our list was Le Secret des Capitelles 2014, from the Cave Cooperative in Saint-Chinian, made with 65% Grenache and 35% Syrah.  The colour of this wine was lighter than the two previous ones had been, and the edge of the wine was pinky red, indicating that it is relatively young (older wines can have a brown-ish edge).  The nose was fruity, with some toasted aromas.  The taste was very round, very easy to drink! 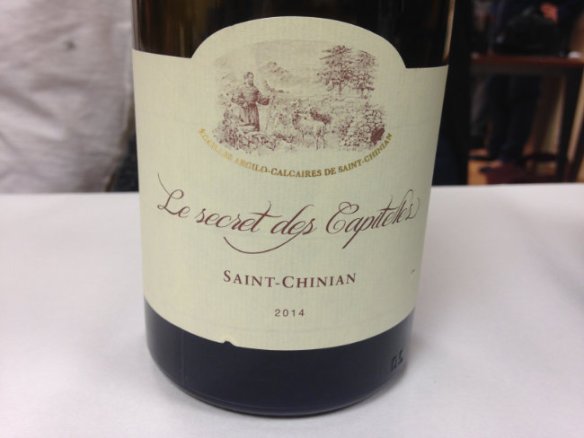 This wine was accompanied by a tartar of hake, a white fish, similar to cod, which had been delicately seasoned with peppermint and licorice, and was topped with a leaf of pennywort (umbilicus rupestris).  The pennywort brought out a sweetness in the wine, whist the pairing with the fish worked perfectly! 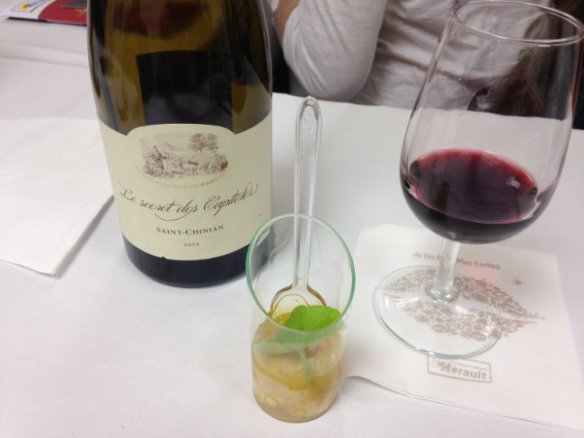 During a brief interlude in the tasting, Thierry explained a little about corks, and why it is important to keep a bottle horizontal:  corks have tiny air pockets in their structure, and if left exposed fungi could grow in these pockets and taint the taste of the wine.  I’m simplifying here, there is far more science to it than just that! 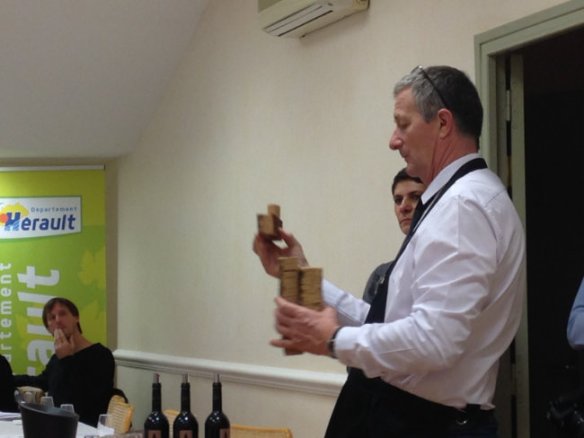 On to our last wine, Domaine Cathala’s Absolue 2013.  With this wine it was a case of keeping the best ’til last!  The wine is made with a blend of Syrah, Grenache and Carignan grapes, which are grown on limestone terroir near Cessenon-sur-Orb.  The colour of this wine was very deep, almost black and the nose had hints of farmyard and something called ‘sweaty saddle’.  I have the ‘sweaty saddle’ on authority – the friend who had invited me to the tasting is an expert!  The wine tasted spicy and fruity, and it was very delicious!! 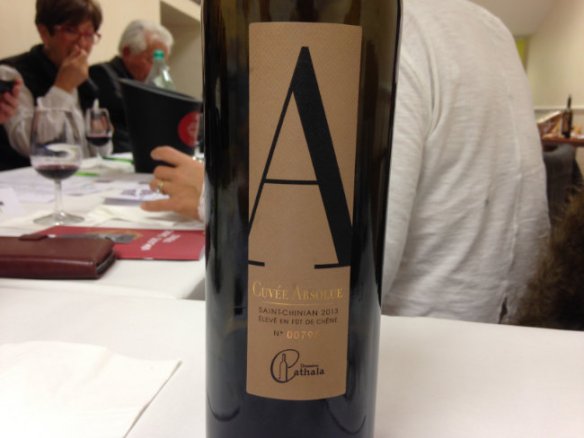 To accompany this wine, we had some baby wild boar, cooked in a stew with Sichuan pepper, mandarin and a little chocolate to thicken the sauce.  It was a pairing made in heaven!! 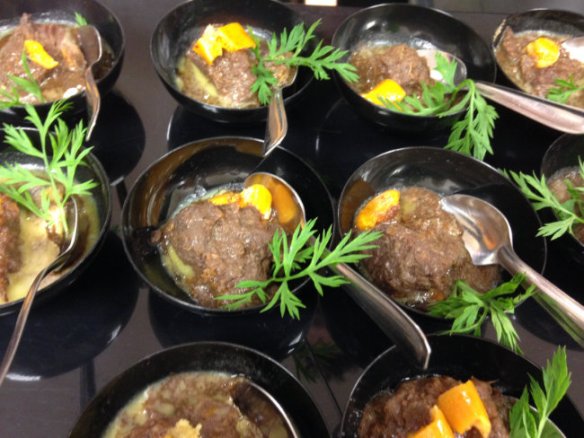 What a great way to spend an evening – good food and good wine, and I learnt a great deal at the same time!!

Here’s a picture of the happy team at the end of the evening – they all did a wonderful job transmitting their enthusiasm for the food and wines of the region!  From right to left: Gaylord Burguiere, who works at Maison des Vins and has wonderful Instagram feed; Frederic Revilla; Natalie Revilla; Thierry’s helper; Thierry Boyer; Nelly Belot, and two ladies from the Herault Department, who’d organised the evening. 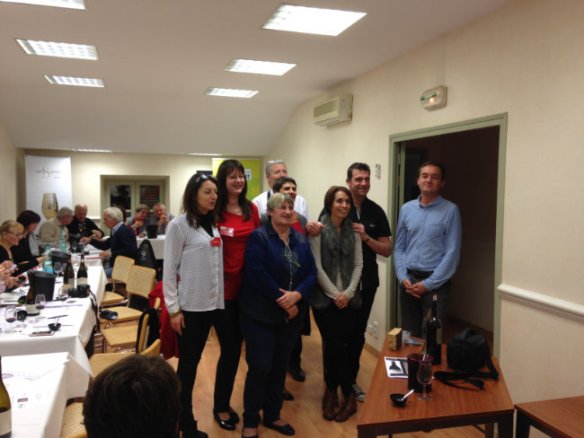 Thank you to Carole for allowing me to accompany you on this adventure!!

If you are in Saint-Chinian, do go and visit the Maison des Vins.  You’ll be able to taste (and buy!) a good cross-section of wines from the Saint-Chinan area!

5 thoughts on “A perfect match”