This past weekend, I went to the annual Cracker Fair.  I wrote about this Christmas market in December 2013, when it took place at the Chateau Abbaye de Cassan (you can find the article here).  This year, the cracker fair was hosted for the first time by the Abbaye de Valmagne, located between Montagnac and Villeveyrac.  This market was established ten years ago, and in the early days it was very much aimed at the British expat community in the area, who felt deprived of their Christmas crackers.  If you don’t know what Christmas crackers are have a look here.

Valmange was founded in 1138, and at one point in its history, it was one of the richest Cistercian abbeys in France!  During the French revolution, the last monks fled the abbey in 1789, and it was sold by the French state in 1791.  The abbey church, which dates from 1257 and which is 83 metres long and 24 metres high, was converted into a wine cellar.  It is probably for that reason that the church has survived.  Enormous wooden barrels were installed in the side chapels, and several are still in place today!   I was watching a number people enter by the door at the end of the church, and most of them had a kind of “wow” look on their faces! 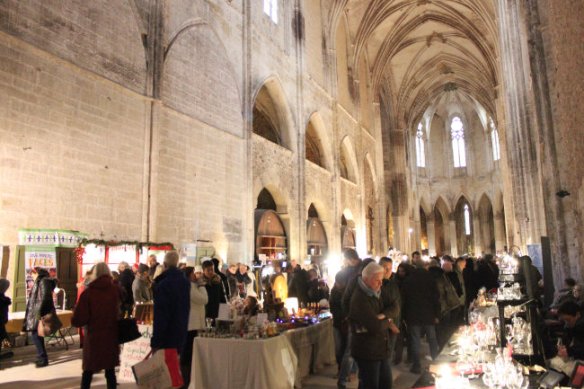 The church is impressive at the best of times, but the fact that it was filled with stalls, people and noises added another dimension!

Around 100 stalls had been set up in the church, offering a large variety of goods, from soaps to syrups, marbles to mushrooms (dried) – you name it! 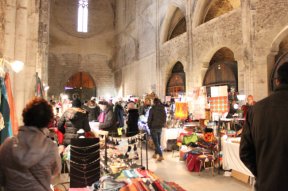 The church was built in the classic gothic style, and true to the Cistercian rules, it is without much in the way of decoration.

From the side of the church, a door led to the cloister, where there were more stalls!!

The cloister consists of four arcaded galleries around a garden.  There is a fountain, which would have been used by the monks for ritual ablutions.

The chapter house is off the cloister, and it too was occupied by stalls! 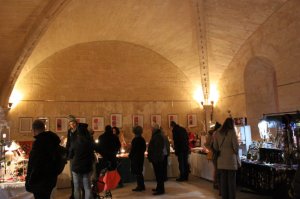 A barrel-vaulted passage housed an exhibition of paintings.

In the former refectory there were more stalls and a cafe.

Valmagne was bought by the Comte de Tourraine in 1838, and he and his descendants have taken very good care of the former abbey over the years.  Today the estate is run as a winery, and the visit would not have been complete without a stop in the shop.  The tasting room is right next door to the shop, and there was a lovely fire burning in the fireplace!

Since 1999, the wines at Valmagne have been produced as organic wines!

Outside, there were more stalls and – most importantly – a selection of food trucks!!

Saturday was a very cold day, and I’m sure that the stallholders outside must have been freezing, but they all remained cheerful! 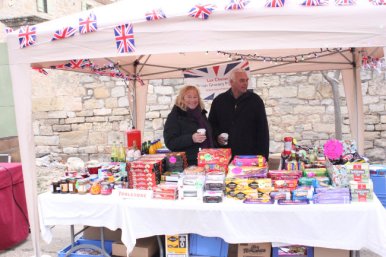 Despite the cold, this was a wonderful Christmas market to visit – one you should add to your diary if you are in the area in early December.  The Cracker Fair is organised by Languedoc Living. You can find details on their website.

The Abbaye de Valmagne is open to visitors throughout the year – you can find details of opening hours here.

8 thoughts on “A new cracker”