The artichoke season is under way in my garden, and I am very fortunate with my crop this year!  I re-planted a row of artichokes last year – and I am reaping the rewards!! 🙂  Artichokes are a delicious vegetable that I never tire of! 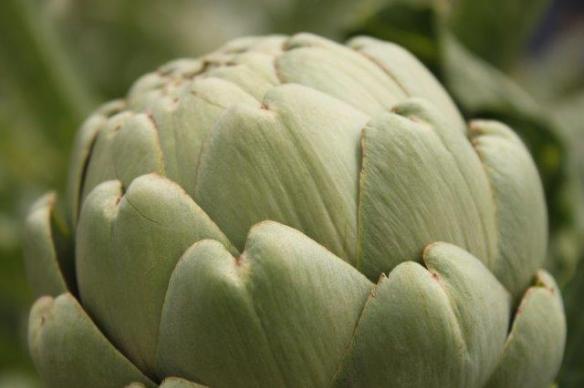 When I bought some new plants last year, I asked the vendor how far to space them.  He recommended a distance of 1 metre between plants, and added some advice: he told me to dig holes halfway between two plants and to bury a bucketful of compost.  The plants would  find the nutrients and take what they needed.  Good advice!!

What with the rain we had over the winter, and the compost, the artichoke plants are looking magnificent.  As a result of their lush growth, they have sent up many flower stalks and an impressive number of large, beautiful artichokes!!

I’ve not yet completely solved the problem of earwigs, which started a few years ago – they just seem to love squatting under the outer layer of leaves of the artichokes!!  I imagine that I could resort to insecticides, but that wouldn’t do!  I would rather live with the fact that I’ll have to shake them out of their hiding places!! 🙂 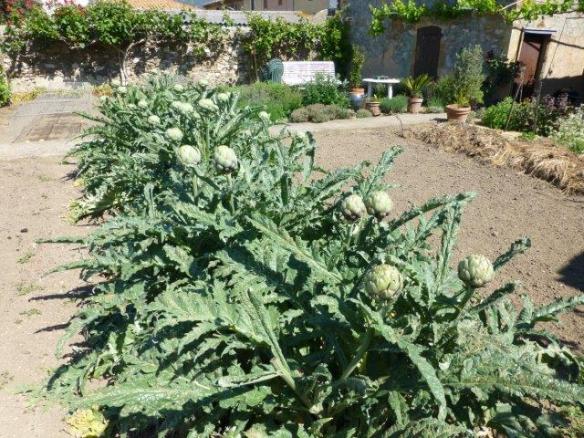 One of my favourite recipes is called “Barcelona Grilled Artichokes” from Patricia Wells’ book, “Patricia Wells at home in Provence”. For this delicious dish the prepared artichokes are sliced, marinated in a dressing of olive oil, lemon juice, and garlic, and grilled – the result is totally yummy! 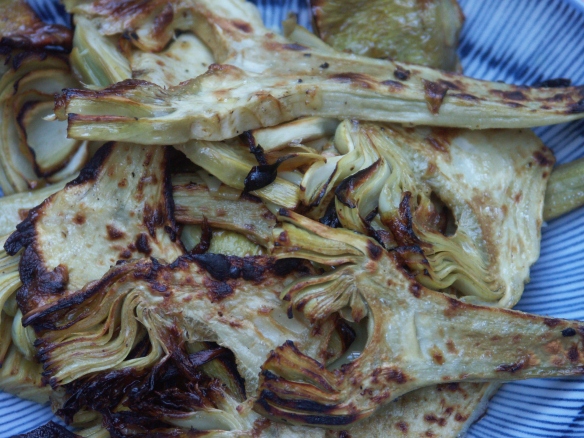 Talking to other people about food and cooking is always rewarding and interesting.  One of my neighbours told me to braise artichokes with potatoes – I tried that, but the result didn’t taste exceptional.  The same neighbour also gave me the idea of adding tomatoes, so I tried cooking the artichokes with smoked bacon and tomato, which worked wonderfully well! 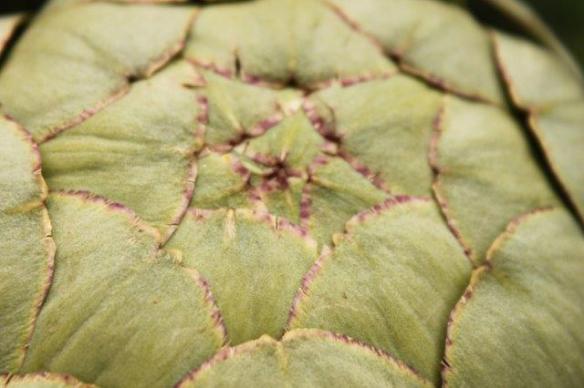 In Claudia Roden’s “Middle Eastern Cookbook” I found two recipes I enjoyed. The first used honey, lemon juice and preserved lemons, the second paired the artichokes with broad beans and almonds. Both produced delicious dishes and I’ll be preparing them again. 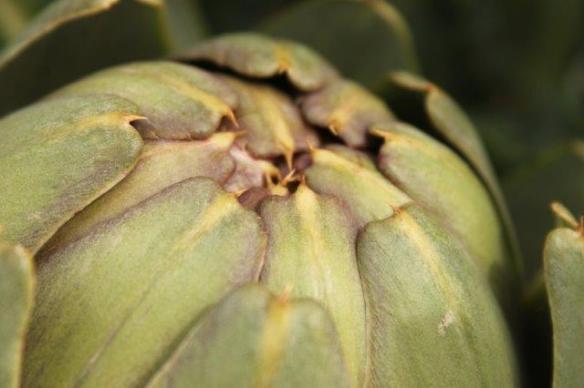 My overall favorite dish was the artichokes cooked with bacon and tomato and I will attempt to give you the recipe below.  Pictures of the progress are at the end of the recipe.

Artichokes with bacon and tomato

Prepare the artichokes:  Pour the lemon juice into a bowl large enough to hold all the artichokes and add enough cold water to submerge the trimmed artichokes in.  Trim the artichokes by snapping off the leaves, starting at the base and working your way up.  Once in a while dip the artichoke into the acidulated water – the newly exposed flesh can turn brown very quickly.  Once the leaves remaining on the artichoke start to look yellow-ish you can stop snapping. 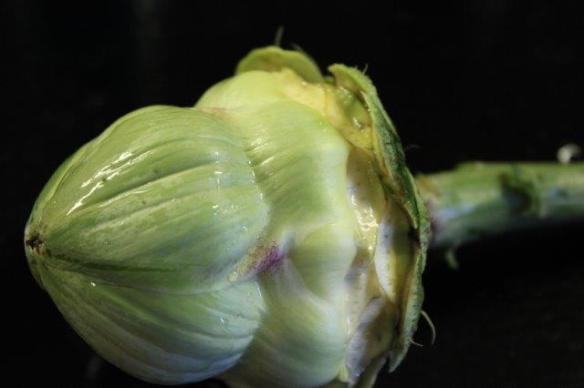 Trim the top with a sharp knife. 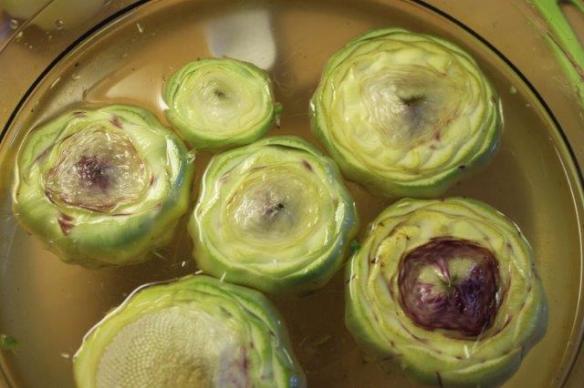 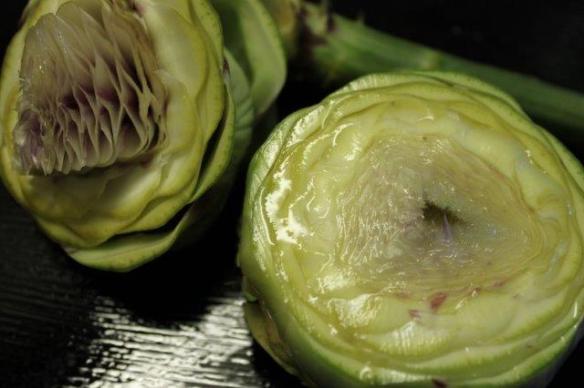 You will probably be able to see the choke now – a mass of fine white hairs at the centre of the artichoke.  I imagine that they would make you choke and hence the name? 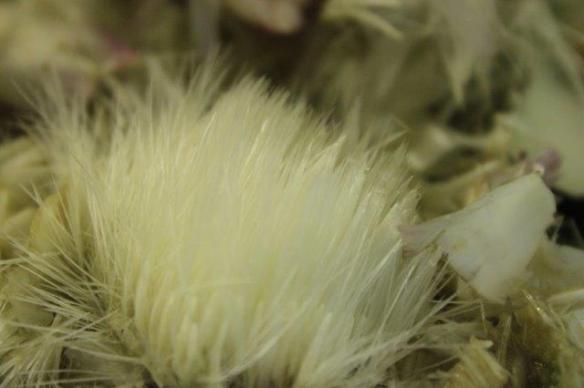 Remove the choke with the aid of a teaspoon, and keep the trimmed artichoke bottoms in the bowl of water. 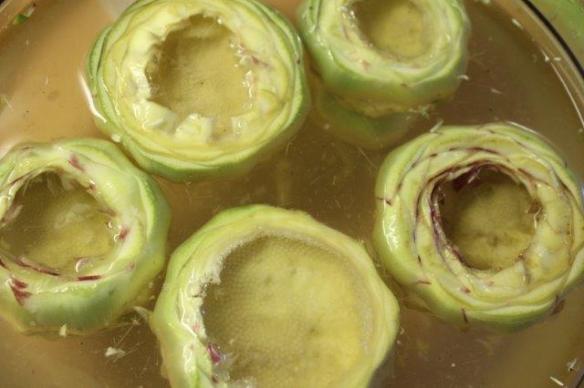 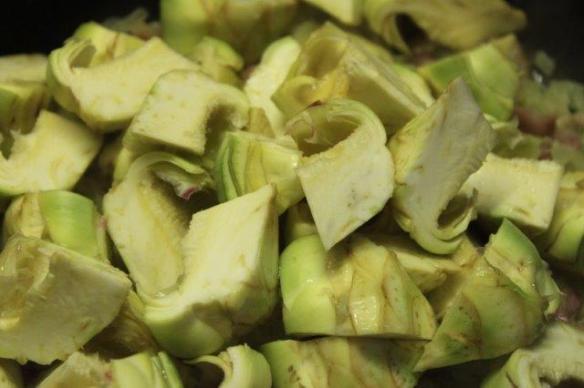 Chop the onion and bacon into small dice and cook gently in the olive oil until the onion is softened. 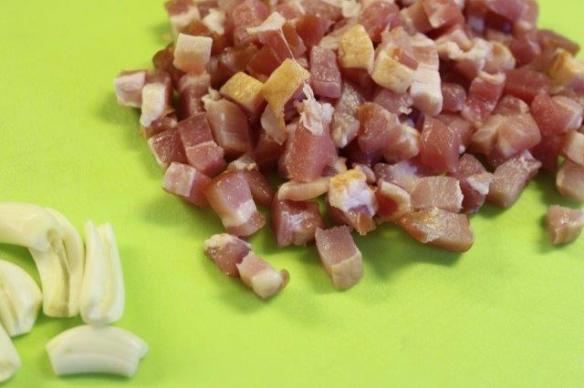 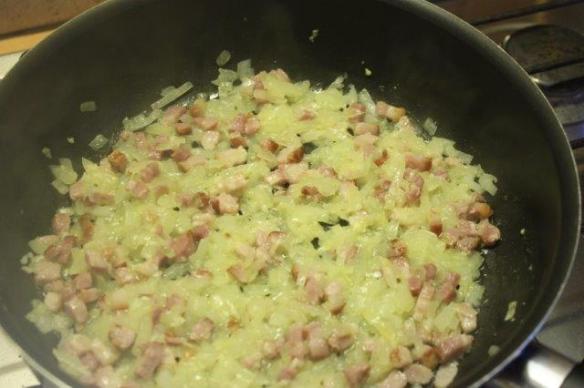 Add the garlic (chopped finely or pushed through a garlic press) and cook for a minute longer.  Turn up the heat and add the drained artichoke pieces. 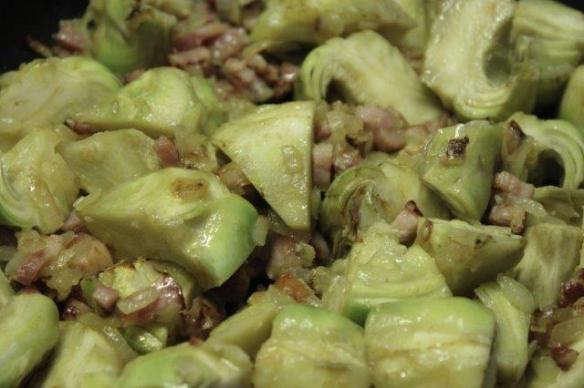 Fry, stirring from time to time until the artichokes start to brown around the edges, then add the chopped tomatoes and season with salt and pepper. 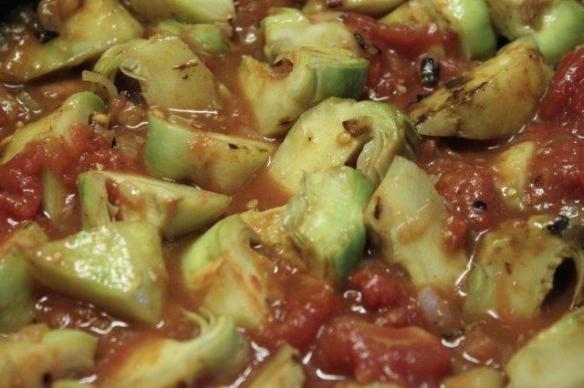 Turn the heat down and simmer for 10 – 15 minutes until the artichokes are tender and the sauce is reduced. 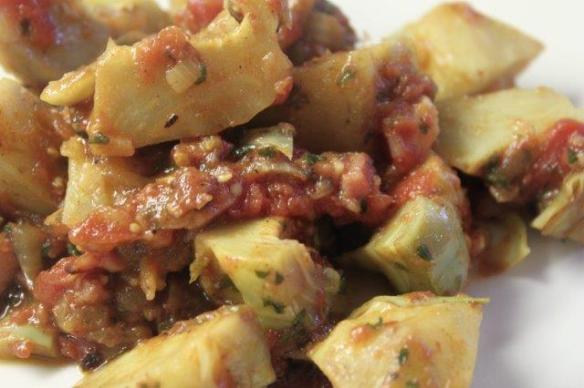 Serve hot on their own as a vegetable course, or allow to cool, dress with a little olive oil and lemon juice and serve as tapas or an appetizer.

Note: you can of course use frozen artichoke bottoms for this recipe, which will reduce the preparation time and will produce very similar results!