The colourful town of Perpignan is worth a visit at any time of year, but if you are interested in real spectacle you have to visit just before Easter.

Every year on Good Friday, a procession winds its way through the narrow streets of old Perpignan, to commemorate the passion of Christ.  The origins of the procession can be traced back to Saint Vincent Ferrier, a Dominican monk who lived between 1350 and 1419.  La Confrerie de la Sanch, the Fraternity of the Holy Blood, was founded in October 1416 at the Church of Saint-Jacques in Perpignan, with the aim of accompanying those condemned to death, as well as their families, before and after the execution, and at the same time commemorating the passion of Christ.

The participants of the procession are called penitents – the men wearing black robes with hats pointing to the sky, their faces completely masked, some of them barefoot or only wearing sandals.  The women wear black veils on their head and are dressed head to toe in black.  The procession is always led by the Regidor, a figure dressed in a red robe, carrying an iron bell, which is rung intermittently, followed by a group of drummers.  The solemnity of the procession as it approached sent shivers down my spine.

In 1777 the authorities decided to confine the procession to the church grounds of the Saint-Jacques church, as it was deemed too baroque and Spanish.  The tradition of taking the procession through the streets of the old town was revived in 1950 and it’s been taking place ever since. 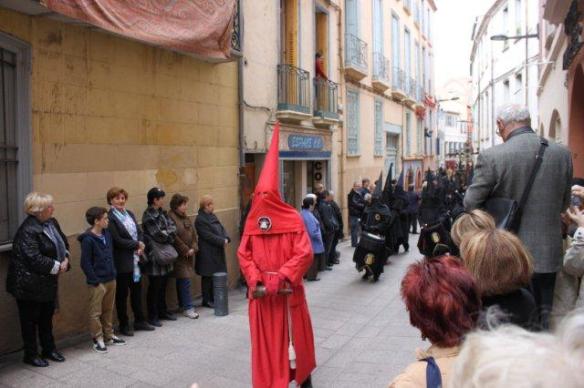 Baroque is certainly a good term to describe the procession today, and the tradition is typically Catalan.   Other processions exist in Arles-sur-Tech and Collioure, where they are still being held at night.

After the Regidor and the drummers comes a very large cross, carried upright by just one man, which is decorated with a great many symbols, which I imagine are instruments of the Passion of Christ, but I could not make sense of all of them. 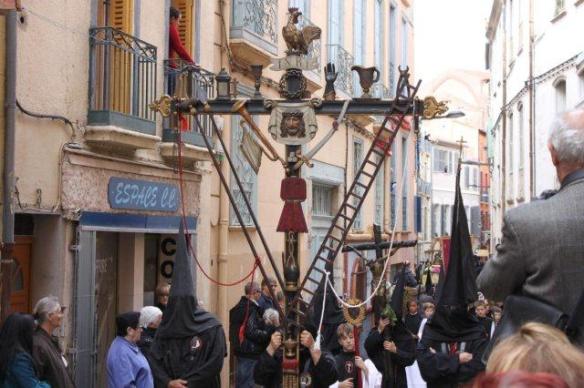 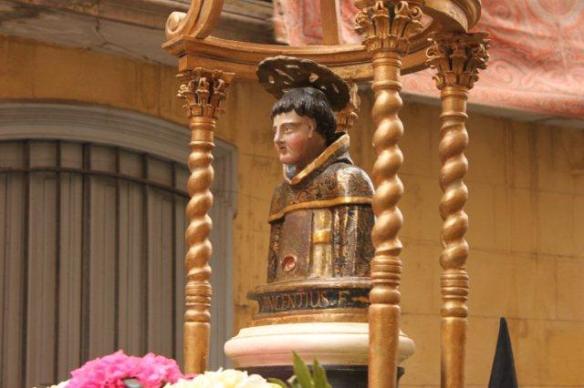 The penitents carry the Misteri on their shoulders, which show scenes from the passion.  So there are all kinds of statues, which are brought from the churches and chapels of Perpignan and the surrounding villages, including one enormous cross, which had to be lowered every so often to pass below the power lines crossing the road.  The statues of the Virgin are dressed in black with mourning veils, some carrying the crown of thorns in outstretched hands, and all with strong expressions on their wooden faces.  The Misteri are heavy,  and the Penitents are doing this not for the spectators who line the streets, but for their faith.  At times I felt very much like an intruder taking photographs, and I did not shoot any videos (sorry!). 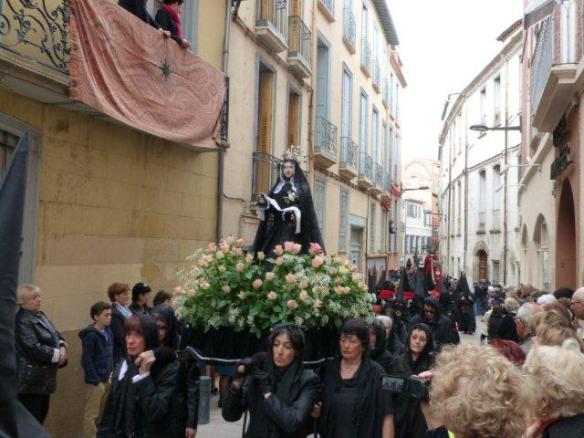 The procession passes in silence; the penitents do not speak, and most of the bystanders watch in awed silence.  The only noise comes from a PA system, where someone is explaining the origins of the Sanch and reading what sounded to me to be sacred texts, some in Occitan. The PA system is also playing the Goigs, the traditional Catalan Easter songs.  I would have preferred for there not to been any of that.  For me it didn’t add to the atmosphere.

The start is at 3pm in Rue de l’Eglise Saint-Jacques, and the procession returns there at 6pm.  In between there are four stops to give those carrying the Misteri a break.   When there is a break, even a short one during the walk, each one of the bearers has a stick on which to rest the handles of their heavy load.  Some of those sticks look as if they’ve been used for a very long time.

So there I stood, awed by the whole thing, watching it go by, taking photographs of all the Misteri.  There had been a little wait before the procession arrived, and just across the street from where I stood was this rather fun sign, so here it is to lighten the mood 🙂 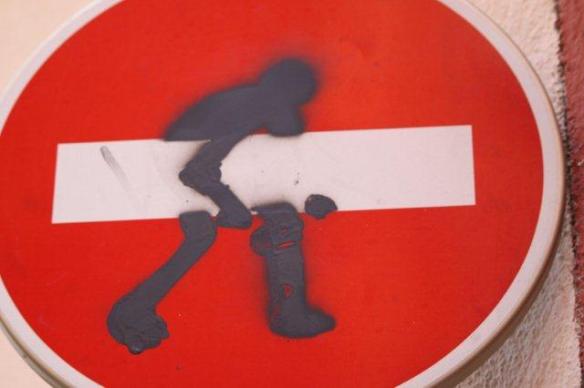 There are many Misteri in the procession and many photographs I took, so I thought I would try and insert a slide show for you.

So, if you ever are in the area around Easter, I would urge you to visit Perpignan on Good Friday, even if the weather does not look too good.  The procession will not leave you indifferent, and neither will the town of Perpignan! 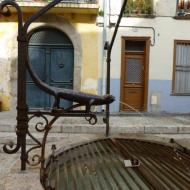 10 thoughts on “Easter traditions in Perpignan”