Following my exciting visit to the Hotel de Montmorency, I walked to the old Theatre des Varietes on Rue Victor Hugo.

It all began in 1864, when an imperial decree relaxed the regulations around the running of theatres.  Prior to that decree, the running of theatres was very strictly controlled by a decree by Napoleon I dating from 1806.  The 1806 decree limited the number of theatres, with the aim to avoid bancruptcies their knock-on effect on the people working in the theatres.  The relaxation of that decree resulted in an explosion of new venues all over France.  In Beziers. the Casino Musical was built that year the name being changed to L’Alcazar in 1867.  Beziers’ L’Alcazar was a theatre of dubious reputation, and after a number of scandals it closed, to be transformed and reopened in 1904 as the Theatre des Varietes.

Here’s what the theatre looked like not long after it opened in 1904: 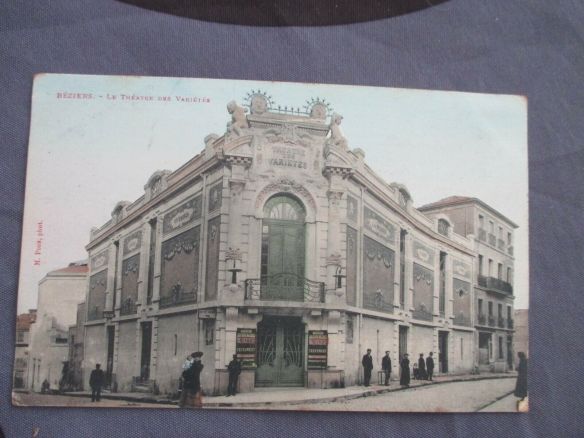 In the 1950’s its facade was altered somewhat:

And this is what it looked like on the day of my visit:

When the Theatre des Varietes opened in 1904 it was decorated in a style described as “Louis XVI rejuvenated”, very ornate and heavily influenced by art nouveau.

Inside, a spacious lobby gave access to the stalls, and there was a staircase to the first floor balcony.  The staircase was decorated with an enormous mirror.  The blue colour may or may not be original, your guess is as good as mine! 🙂

Here’s the top of the mirror:

The lobby on the first floor was where people went to see and be seen.

Here’s what the auditorium would have looked like around 1920: 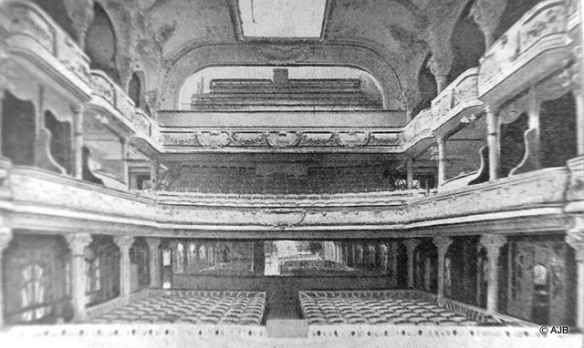 And this is what it looked like on the day of my visit:

On the upper balcony the walls were painted black. On the walls of the first floor balcony, and on the ground floor walls, there was a sparkling finish.  All of that dated from its incarnation as a discotheque.  The sparkling stuff had a very disco feel to it!!  That said, the paint was peeling and flaking everywhere!!

Luckily, the decorative plasterwork does not appear to have been affected too much as yet!

The holes you see in the ‘flower baskets’ were light bulb fittings!  When the theatre opened in 1904, it was lit by over 300 light bulbs!!  At that time the city did not yet have a general electricity supply, but the theatre had its own gas-powered generator!

At the opening of the theatre, the glass panels in the ceiling were decorated in the art nouveau style.  They probably got broken over time and were replaced with regular glass.

The discotheque closed in 1982, and since then the theatre has lain empty and abandoned.  The building’s owners did what they could to slow decay, making sure that the roof was watertight.  They also restored the facade around the entrance, removing the ugly 1950s additions.  However, restoring the theatre to anything like its appearance during its heyday was beyond their means.

A group of local people had been advocating that the building be bought by the municipality so that it could be saved from redevelopment.  That finally happened earlier this year, and the future of the theatre looks somewhat rosier!

On the white sections in the pictures below, the paint has been stripped back to reveal the original plaster decorations underneath. 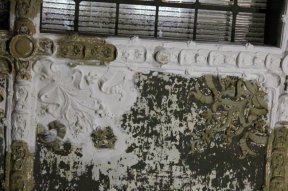 Most of the original building is still intact, but a renovation is going to be costly all the same. 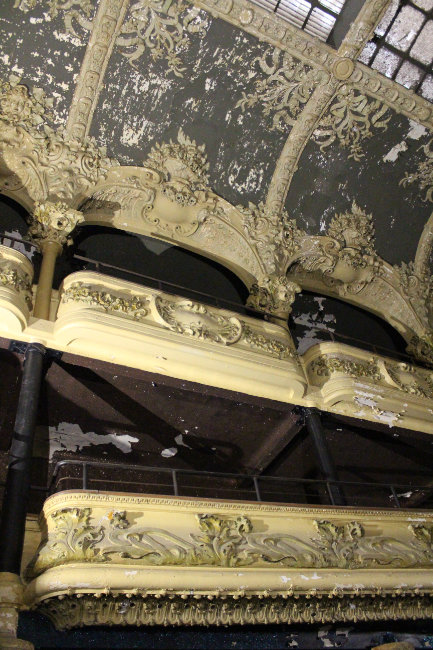 I do hope that the outside of the building will be given a face-lift too! 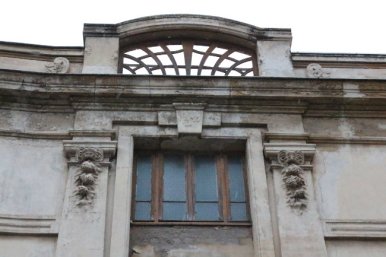 This was another fascinating discovery on my visit to Beziers during the recent European Heritage days.  I visited one additional interesting place after the Theatre des Varietes – to be continued!!

3 thoughts on “A bit of variety”