At this time of year in France, when you see someone for the first time after New Year’s Eve, it is customary to exchange new year’s greetings. So, without further ado:

Bonne annee, bonne sante, meilleurs voeux to you all!!

This greeting is usually accompanied by a kiss on each cheek, not a real kiss but kind of touching cheeks and making the appropriate noise.  So please feel yourself virtually kissed!!

The new year’s greetings go on until the end of January!

Soon after Christmas, the galettes des rois or Epiphany cakes make an appearance in the shops and bakeries.  The tradition of the cake is closely tied to the three kings who came to Bethlehem bringing myrrh, gold and frankincense to baby Jesus. 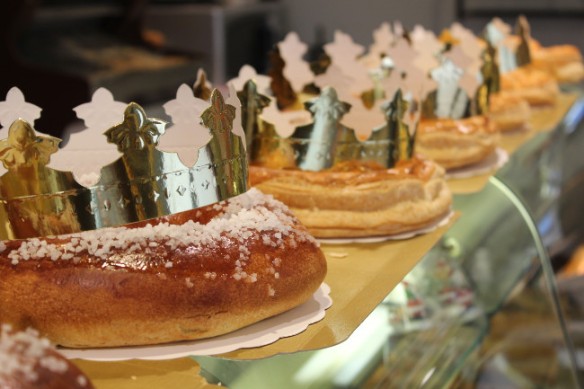 Epiphany cakes come in one of two shapes:  there is the flat galette des rois, a frangipane filled puff pastry confection, or a ring shaped cake made with brioche dough which is often called a royaume and is decorated with sugar and/or with glacé fruit.  That same ring-shaped cake can also be found filled with cream!!

Common to all varieties is the fact that a favour is baked into them.  In olden days, the favour would have been a feve, a dried fava bean.  In France the favour is still called a feve and it is usually a tiny porcelain figure (watch your teeth!!).  Whoever finds the feve in their piece of cake is crowned king for the day.  Whenever you buy an Epiphany cake in any bakery or shop, a small cardboard crown is always part of the purchase!

Another tradition attached to the eating of the Epiphany cake concerns the dividing of the cake.  The youngest person usually sits under the dining table.  The cake is then cut into pieces, and the person under the table then calls out the name of the person who is to have the piece which has just been cut.

If you’re tempted to make your own galette des rois, have a look at this article where I give the recipe.

The photographs for this post were taken at La Gourmandise bakery in Saint-Chinian.  Thank you, Carole!!