We’re into week five of the lockdown – at least I think we are, I sometimes lose track of time! 🙂  Last Monday, we had some good news – sort of.  Emmanuel Macron announced that France should gradually come out of the lockdown from May 11th onwards.  There were no indications as to how it could work, but no doubt the details will follow.  Of course, that means that we’re in for a little more than three weeks of staying at home!!  😉

Last Sunday being Easter Sunday, I had planned ahead and bought a piece of saddle of lamb from Boucherie Gerard, my local butcher.  Along with most food shops, Corinne and Nicolas Gerard have stayed open throughout the confinement.  They’ve been incredibly cheerful, and it’s always been a joy to shop there! 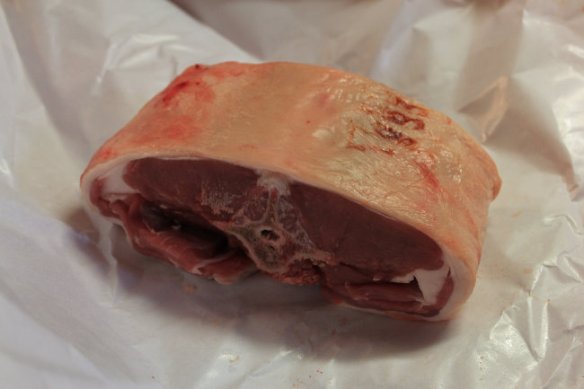 I wanted to roast the lamb, but as the joint was relatively small (700 g) I figured that a traditional roast would be somewhat tricky to pull off successfully.  I briefly considered cooking it at a low temperature (80 degrees Centigrade) for many hours but I dismissed that idea too.  In the end, I hit upon cooking the lamb saddle in a salt crust.  I’ve  cooked things in salt crusts a number of times, and it has always worked well for me.  In fact, I’ve previously written about that way of cooking here.  In an old copy of House Beautiful I came across an article by Gabrielle Hamilton of Prune restaurant in Manhattan, in which she gives directions for cooking beef tenderloin in a salt crust.  I used that as my inspiration!

To begin with, I browned the joint all over in a frying pan.  I started in a ‘dry’ frying pan, i.e. without any fat, and I placed the joint with the skin side in contact with the hot iron first.  It soon started to give up some fat, and that was all I needed to help brown the rest of the meat.  It was quite smoky, so I was glad to have an efficient extract fan above my cooker! 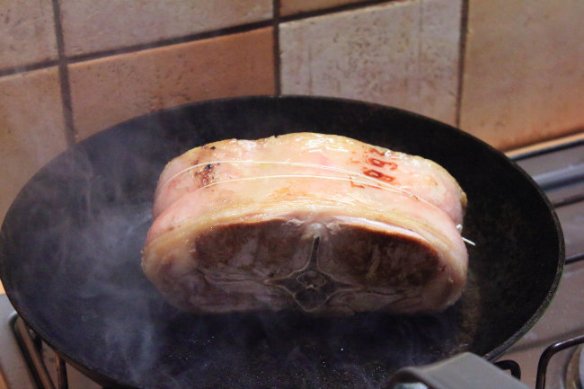 While the meat was browning, I prepared my salt crust.  In a large bowl, I beat an egg white until it was foaming, then I added two kilos of coarse sea salt (kosher salt) and a little water.  The texture was that of sand that’s damp enough to build a sandcastle with.  Below is a picture of the lamb nearing completion of the browning: 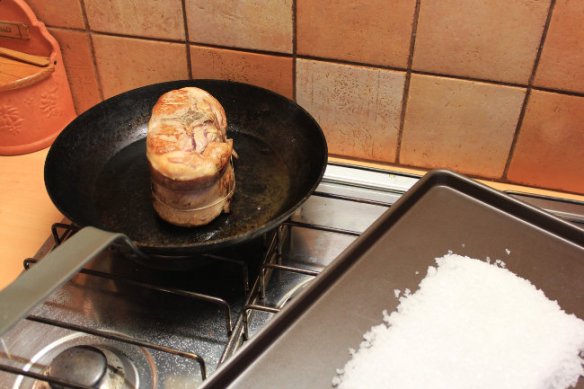 I placed a layer of the damp salt mixture on a baking sheet, and put the lamb on top of that: 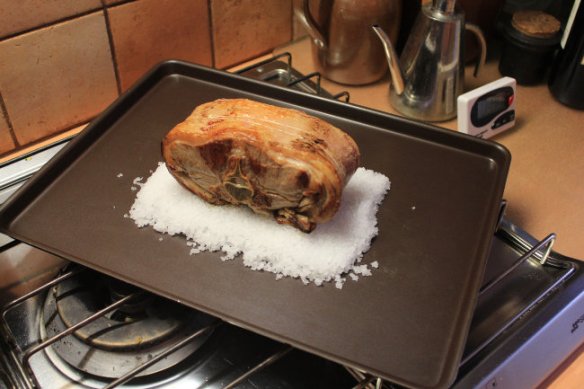 I then encased the lamb with the remaining salt mixture: 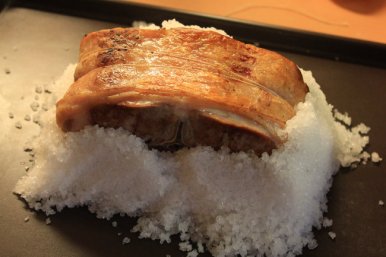 Once it was all covered, I put it in the oven, which I had pre-heated to 130 degrees Centigrade.  Gabrielle Hamilton gave the roasting time for her tenderloin as 45 minutes and I stuck with that.

Here’s what the lamb looked like when it came out of the oven: not all that different to when it went in!! 🙂 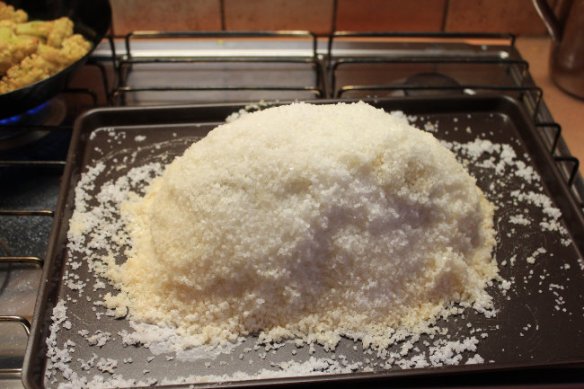 I left the meat rest for about 15 minutes, before I cracked open the crust.  It had set very hard, but a sharp blow with the blunt edge of the cleaver soon made it crack! 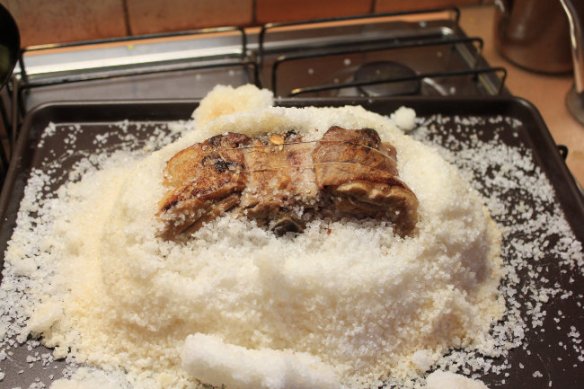 There was a fair amount of salt clinging to the meat, so I used a pastry brush to get it all off! 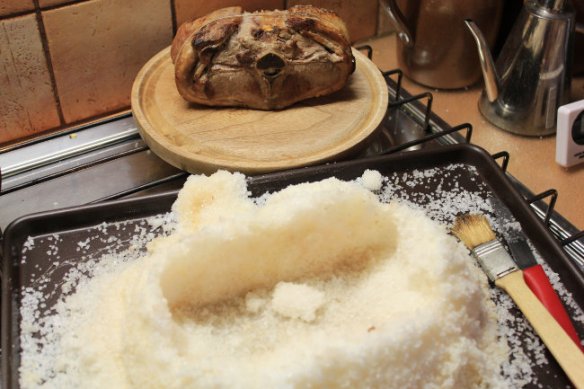 I had prepared some mashed potatoes, pan roasted vegetables and mint sauce while the meat was cooking, so I was ready to carve and dish up as soon as the meat had been ‘liberated’ from the crust! 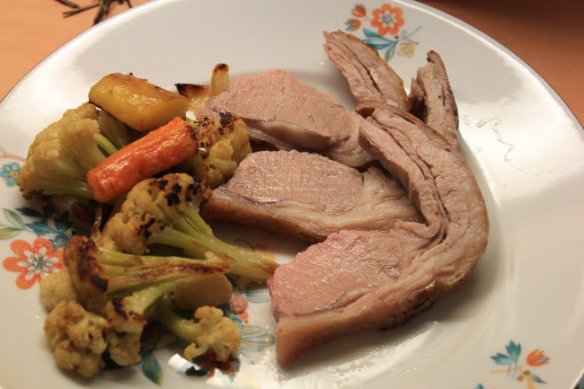 The lamb was wonderfully tender, with just a hint of pink all the way through, and a great savoury flavour. No salt is needed with this method of cooking, the salt crust takes care of all the seasoning!

Best of all, after this wonderful meal there were enough leftovers for lunch the next day!! 🙂 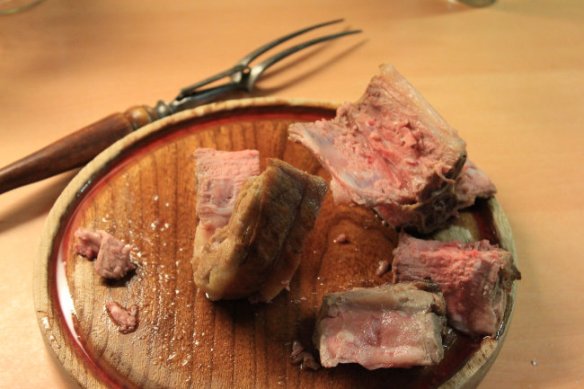 Since it was Easter Sunday, there was a little dessert to end the meal.  I cut a few slices from the lamb-shaped sponge cake I had made, and topped them with a little rumtopf, fruit which had been macerating in rum and sugar for some months!  Simple and oh so delicious!! 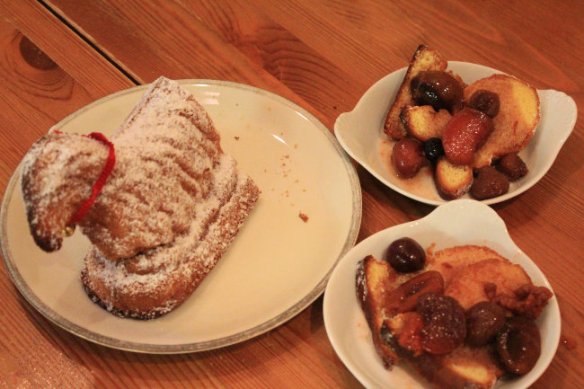 How was your Easter meal – did you have any special treats??