In early August, an article appeared on the CNBC website which caused quite a stir in Saint-Chinian – thank you Julian for forwarding it to me!  The article listed the world’s top 10 retirement destinations for 2017.  I posted a link to the article on the midihideaways facebook page, so, if you’ve already seen the article you’ll know why it would have caused a stir – Saint-Chinian was listed in fifth position!!  You can read the article via this link.

It was a little while before the local press found out about it, but eventually the story was picked up by Midi Libre, and it made the front page of the Sunday edition on August 20, 2017!  Here’s a link to the Midi Libre article. 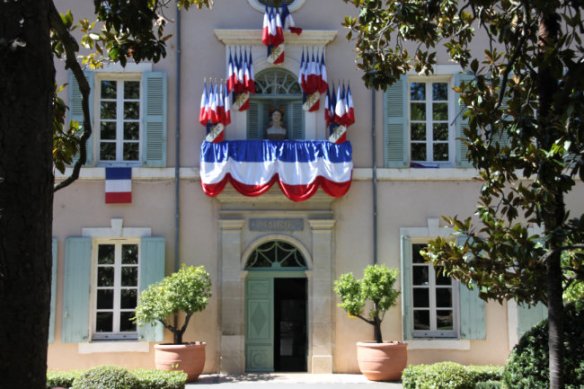 After that, things went a little crazy!!  Some locals started to get concerned that the village would be overrun by Americans.  Others welcomed the news in the hope that it would bring new people to the village.  On August 22, a TV crew from France 3 appeared in Saint-Chinian, looking to interview locals and foreign retirees.  Their video was broadcast later in the week, and can be found here.

The following morning, a TV crew from TF1 turned up, looking for people to interview!  Their video aired the same day, at lunchtime, and you can watch it here.  Please be patient, the adverts don’t take too long…

On Friday, August 25th, yet another TV crew turned up, this one from M6 – their video was aired on the following day, and can be watched via this link.  Again, please be patient with the adverts! 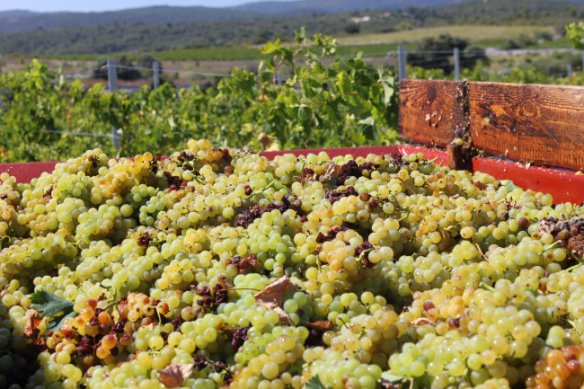 Several articles have since appeared in the French media – BFMTV, RTL and Le Parisien.  The radio station for the region, France Bleu Herault, added its own take on the CNBC article, interviewing the mayor and Jeremy at Cafe Vernazobre.

The link from the CNBC article leads to a website called Live and Invest Overseas.  The full article on this website goes into a lot of detail as to how the best places to retire to in 2017 were chosen.

Ever since reading the article I’ve been intrigued as to how they came to pick Saint-Chinian, out of all the villages in France or even Europe!!  I decided that there was only one way to find out:  I wrote to Kathleen Peddicord, the author of the CNBC article, and founder & publisher of Live and Invest Overseas.  Here’s what Kathleen replied:

Thanks for your  interest and for getting in touch. We were all surprised and delighted to hear about the far-reaching impressions our English-language Index has made across the pond.

Our annual Overseas Retirement Index has featured the Occitanie region (under former name Languedoc) in previous years, because we feel it offers an excellent quality of life at a great value—and, more generally, that the south of France is a must on any list of the best living or retiring destinations in Europe.

This year we approached our methodology differently, dividing the Index into categories of lifestyle. Under this new organization, we included Small Towns as a lifestyle option, and thought that a small town within Occitanie would be an ideal addition to epitomize small town living for France and generally for Europe.

We’ve known many retirees to villages and towns throughout Occitanie and have a particular concentration of contributors (or family members of contributors) who happen to live in Saint-Chinian. Based on their testimonials, it sounded like the quintessential small, southern French town—a perfect representation of small town living in Europe.

Within France for this category, we only considered a couple other towns in Occitanie and towns in Morbihan in the north. The south beat out the north based on weather and access to the Med. Saint-Chinian came out among our other southern towns as a particularly good value for cost of living, while being at what we felt were ideal distances from nearby larger towns, transport hubs, and the Med. But we only allowed for a winner and a runner up for each region in each category, so the other small towns we considered before narrowing one of the slots down to France took the entire Continent into consideration (Portugal, Spain, Italy, Slovenia, and Greece in particular).

Please let us know if you’d like to know anything else about Saint-Chinian’s inclusion or the Index and how we do our rankings and gradings. “

So there we have it – Saint-Chinian beat off stiff competition and it is definitely the place to be!!

With the arrival of the warm weather there is an explosion of blooms everywhere!  In my garden the roses are particularly good this year, and Mme Meilland (also called Peace) is really going for it.  She starts of with a tame and decorous bud of the palest yellow, with splashes of pink along the edges of the petals, but once fully open she turns into one of the blowsiest roses you’ve seen, just amazing!  That rose always reminds me a bit of some of the hats the Queen Mother was famous for at one time.

With the help of two friends I spent most of Wednesday gardening, trying to catch up!  Between the three of us we managed to get a fair bit done:  weeded and butted the potatoes (lots of tasty purslane in there – edible weeds which are good for you!), planted aubergines, peppers, chilis, melons and courgettes, and did a lot of other general weeding and clearing up.  As you’ll see the in the picture, watering in my garden is mostly done by gravity.  There is a canal system which brings water into the village and so long as I level the earth well enough I can just let the water run along the rows of plants!  This morning I managed to get lettuce, beetroot and onions planted, as well as carrots and parsnips sown and watered in – it’s slowly taking shape!

Earlier in the week on a visit to Bize Minervois I came across these charming sights.  Above the door you can just about see that something was once written there – could it have been CAVE? But what was the rest??  The street signs in Bize Minervois are all individually hand-made by a ceramicist and they look delightful!  Placette St Genies is the home of Les Remparts, and the picture with the wonderful irises and roses was taken in the garden of Le Figuier – both holiday homes for rent (a few weeks only remain at each for this season!)

On the way back to St Chinian I just had to stop to snap this for you.  It’s Valerian (Centranthus Ruber) in its red and white form.  Valerian seems to grow very well in our area, and right now forms great big patches of pink in areas.  When combined with the yellow broom it is simply stunning.  The poppies this year have put on a good show, but not quite as spectacular as the ones in Monet’s painting of the poppy field in Argenteuil, perhaps next year?

Last Sunday I stopped at Villespassans for their annual fete – a charming affair with a small brocante (flea market), some old cars and a number of stalls selling artisan made products and wine.  The field next to the old cars was home to hundreds of Pyramidal Orchid (Anacamptis Pyramidalis) and there was some cistus and broom blooming as well.  The birds were singing all around and the sun shone – what more could I possibly want?  The top of the bell tower in Villespassans always looked pretty interesting from afar.  But looking at the close-up I noticed a raft of aerials and last year’s Christmas decorations – ho hum…

A walk around St Chinian brought some more delights:  Yellow irises growing alongside a stream (there are masses along parts of the Canal du Midi),  a white climbing rose on a fence, a wild cherry beginning to ripen and some Spanish broom caught in the evening light.  May really is one of the best months to spend in Languedoc!!

The last picture in today’s post is a riddle – I wonder if anyone knows the name of this plant? It’s growing in a pot in my garden 🙂

A few weeks ago I was nominated by Peri from Peri’s Spice Ladle for the Versatile Blogger Award – I was very surprised and deeply honored – THANK YOU Peri!!  Peri writes wonderfully about Indian food and I enjoy her blog a great deal!

The Rules of Acceptance:
Thank the person who gave you this award