August 2, 2013 marks the end of an era of sorts – the last ever firing of the old bread oven in the village of Azillanet.  The story started in 1900, when Monsieur Bertoz senior had a new oven built in his bakery at 16 Avenue du Minervois in Azillanet.  The oven was built by Gustave Carrier from Nimes, with several tons of brick and cast iron, and occupies a quarter of the ground floor of the building. 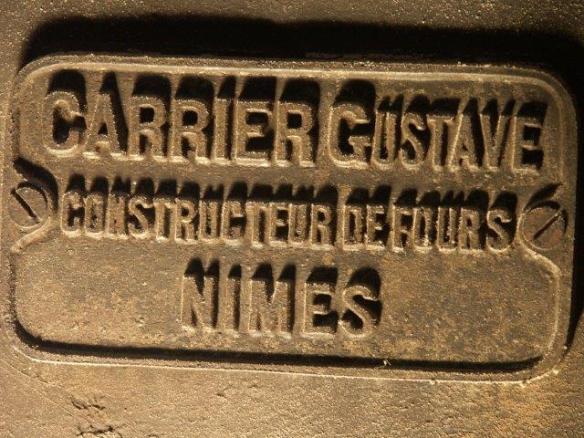 It gave 67 years of loyal service to Monsieur Bertoz and his son, and when Monsieur Bertoz junior retired in 1967 it sank into a Sleeping-Beauty-like sleep, abandoned but not forgotten!

In 2009 Stephane Marrou came to the Minervois looking for old wood-fired bake ovens, to open his own bakery, making bread with organically and locally grown cereals.  Someone told him of the two bread ovens in Azillanet and that’s where the story picks up again.  Marie-France and Jean-Louis showed him the old bakery, where Marie-France’s father had plied his trade, and Stephane was smitten by the beauty of the old oven (note: there is another disused bread oven in the village).

It took two months of patient work to warm up the dormant oven, which hadn’t seen service in over 40 years.  Great care was needed to make sure that it didn’t crack, but in the summer of 2009 the time had come for the first bake and Stephane was overjoyed to be able to revive a piece of local history in the process.

I was lucky to meet Stephane when he first started to sell his bread on Sundays in the market in St Chinian – it was the kind of bread I had been looking for for years!  When you think of French bread most people automatically think of baguettes – but that’s really a typically Parisian bread which has conquered all of France and elsewhere since the 1920’s.  Stephane’s bread is different:

“So, how is it made” – I hear you ask?  On baking days Stephane starts mixing his different doughs from 7am, in one of those large food mixers.  The dough is then kneaded by hand to develop the gluten, the elastic strands of protein which give the bread its structure and which allow it to rise.  The dough is then left to rest and ferment for several hours. 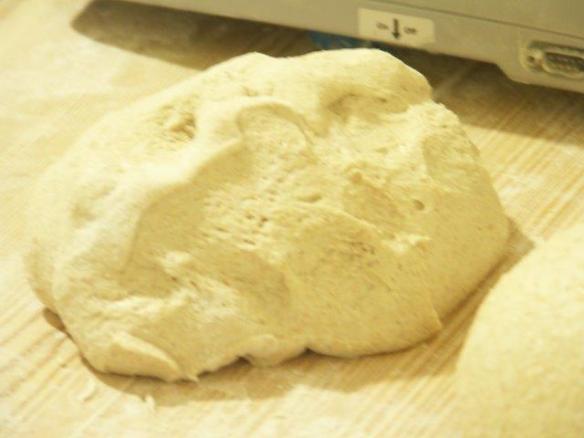 Once it’s risen sufficiently the dough is portioned up and given a pre-shape and another rest.  In between times, Stephane has to get the oven stacked with wood so he can light the fire.

Once the dough has risen enough, work starts to give it its final shape, and then it is left to rise once more.

Meanwhile, the oven is being lit – just a little taper is all that’s needed, the wood is perfectly dry and catches in seconds.  The flames lick the logs and soon the mouth of the oven is filled with flames. 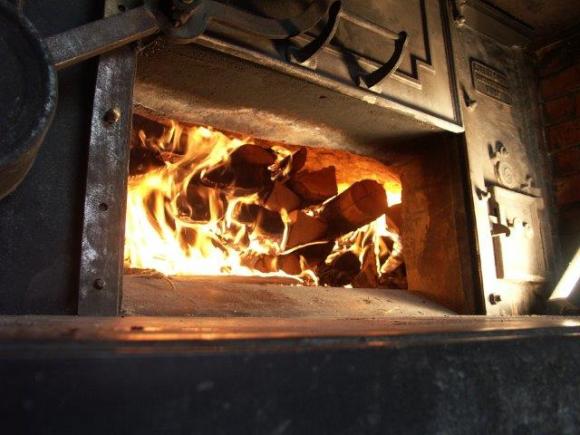 While the fire is burning, work continues on the shaping and forming of breads, the speciality breads such as the ones containing dried fruits, and of course brioche!   The fire burns hot and lively, but after about 45 minutes it starts to die down and Stephane spreads out the coals to evenly distribute the heat.  Some time later the hot ashes are raked out, the oven brushed, and once the heat has spread throughout the oven over 100 kg of risen dough are loaded into the oven. 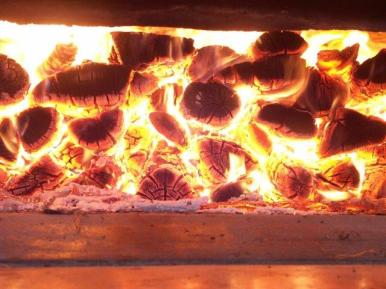 Then comes the time when a beautiful smell permeates the bakery and the bread is ready to be pulled out of the oven.  Open the oven door and have a look in – all you can see are perfectly baked loaves.  And while you’re there take a deep breath – the fragrance is divine! 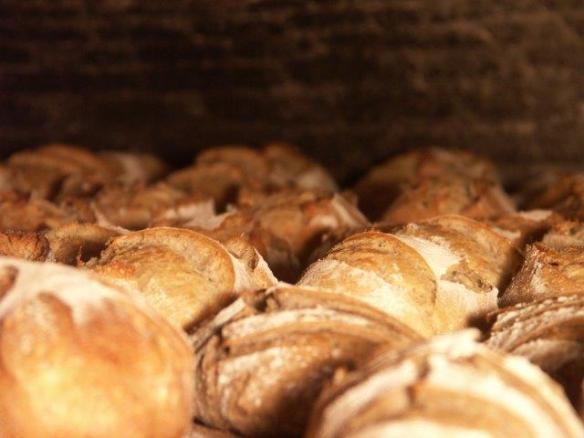 With a long-handled wooden peel Stephane pulls the loaves from the oven;  each loaf is tapped to check that it’s done, and any excess flour is brushed off the underside. Then it is stacked into a crate.  I was awestruck by the way Stephane seemed to caress each loaf.

After over half an hour’s work the oven is finally empty and the bread neatly stacked.  And now it’s time for tender breads such as the brioche to be cooked; these breads need a lower temperature and shorter baking time.  They are given a brushing of egg-wash and a sprinkling of sugar, before being slipped in the oven.

Everything is going great, so time to open shop!  Stephane has developed a loyal customer base over the years, first and foremost amongst the villagers who were ever so pleased to have a bakery on their doorstep once more.  People also come from far and wide, and trade is brisk from the moment the door is unlocked. 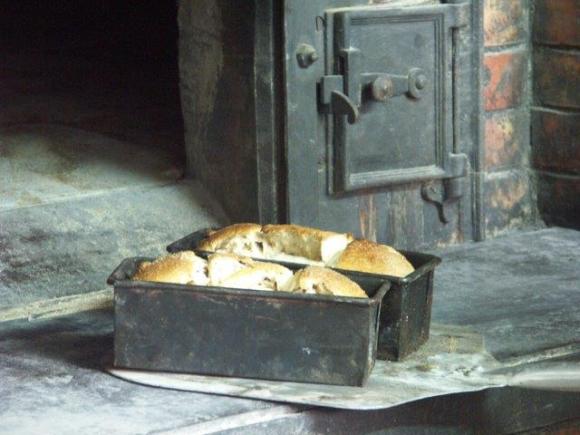 So there you have it – tradition is still alive!  On August 2, 2013 the oven in Avenue du Minervois will see its last ever firing and baking.  From 3pm you can come and watch the bread being pulled from the oven, and from 5pm you can bring a dish to be cooked in the oven.  There’ll be a communal meal later on, and a toast to the oven.  I’m far too sentimental and as I am writing these last few sentences I feel rather emotional.  But all is not lost:  Stephane will continue to bake in Azillanet, at new premises at 10 Avenue d’Olonzac, and you’ll be able to buy fantastic bread made in the traditional way either there or in St Chinian market on a Sunday.