On my last visit to the Salin in Gruissan I came across a leaflet advertising guided visits of an archaeological site on the Ile St Martin at Gruissan.  I’m forever curious when it comes to things like that, so off I went recently to explore, as the site is only open for July and August.  Before going I tried to pinpoint the spot on an aerial view, without any success.  So I just drove past the Salin and hoped for the best :-).  After a few kilometers I noticed a small sign followed not much later by another, which directed me to where the site is.  I really didn’t know what to expect. 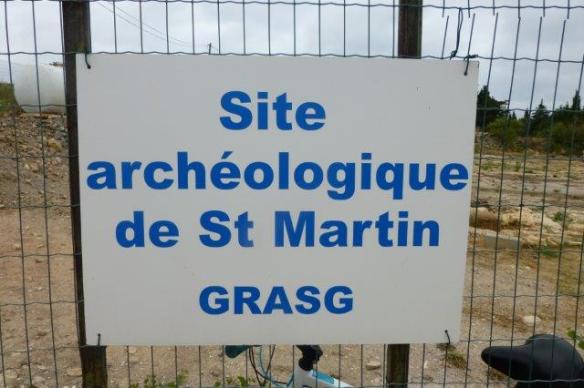 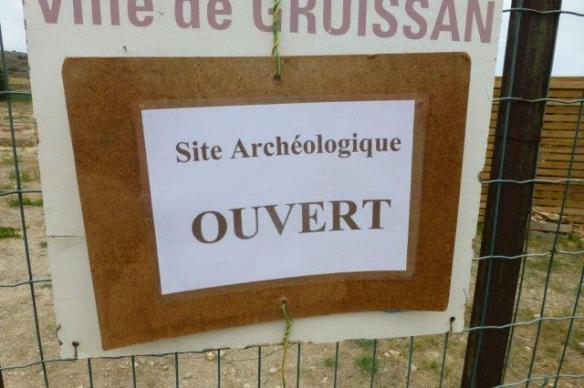 The guide was already at the far end with a group of people, but there was a waiting area with information panels and display cases, and some benches.

The items in the display cases were fascinating :

After a little while of waiting I decided to explore outside the site, since it looked as though there would be a little while before the start of the next guided visit.  And the exploration was well worthwhile, the views were fantastic!

Soon it was time to get back to the site for the tour.  Our guide gave us some of the history of the present site.  When a vineyard was ploughed up in 1986 a number of items were found and as a consequence the land was acquired by the municipality in exchange for another piece of land.  Preliminary explorations between 1988 and 1990 allowed the experts to date the occupation of the site between the 1st and 5th centuries AD, and in 1999 the real digging began.  It became apparent that there had been a number of buildings on the site. The archaeologists found evidence of stone walls and remains of a hypocaust, the Roman version of under-floor heating. The site was then closed until digging resumed again in 2011, and since then work has been carried out in June by a team of archaeologists helped by groups of students.

The guide explained that the site was probably part of the port administration – the sea would have been much closer 2000 years ago than it is now, and the Ile St Martin was really an island then.

We started off where the upper part of a mill had been found.

The upper part of the mill was in pretty good condition, but of the lower part only pieces had been found.  Nearby was the bottom part of a bread oven, so the archaeologists deducted that that particular building must have housed a bakery.  A few steps away the base and capital of a column had been found and left in-situ, and just in front of that were the remains of some kind of drain, amazingly intact. 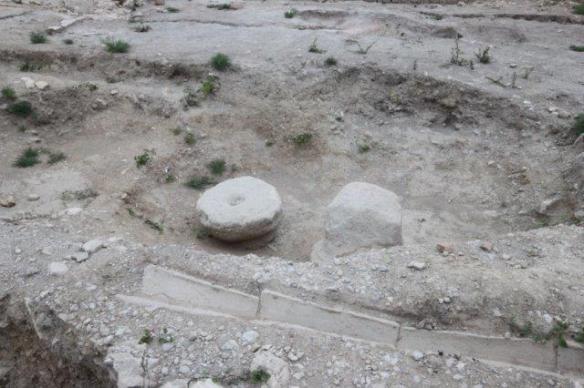 Then we came to an area which our guide explained must have been a kind of store house as many amphorae had been found embedded in the floor.  Some of them had been broken whilst others remained pretty intact.  Next year the one which is still more or less in one piece will be filled with sand, to stop it collapsing when the earth around it is scraped away! 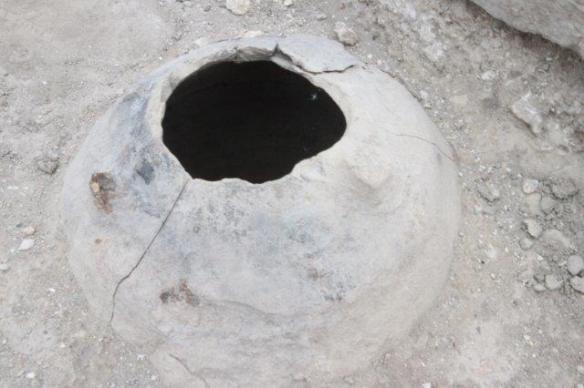 The next “find” was a drain, beautifully and solidly built nearly 2000 years ago!  In the second picture you can see the red colour of the soil near the drain.  Effectively the drain was for the balnea, the Roman bathhouse just next door 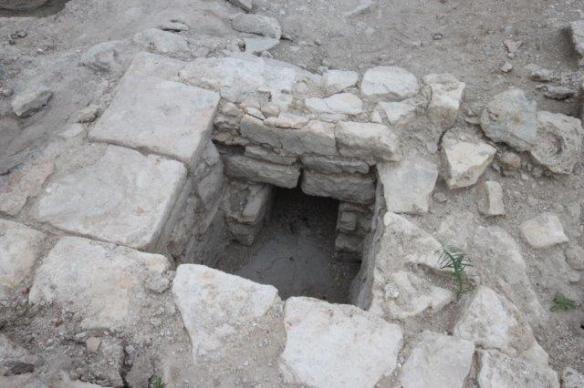 In the balnea the water was heated by a wood fire for the basins.  Our guide explained that it was assumed that the port was providing services for merchant seamen, who came ashore after lengthy voyages, and who needed a good bath!  That, he thought, also accounted for the sturdy drain close by, as there would have been lots of dirty water :-)!  One of the basins was round and the one next door rectangular, and the floors are still very smooth. 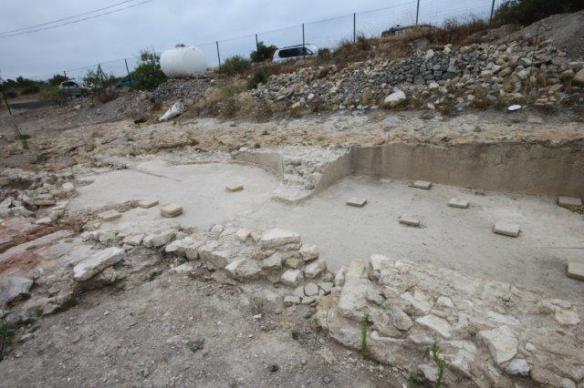 Next we admired the remains of a dolium, a large terracotta storage container, much larger than the amphora we had seen earlier.  This particular dolium had unfortunately been broken during exploratory work, but an intact one had been extracted and shipped off somewhere (perhaps the local museum?).  The archaeological museum in Narbonne has several impressive examples on display. 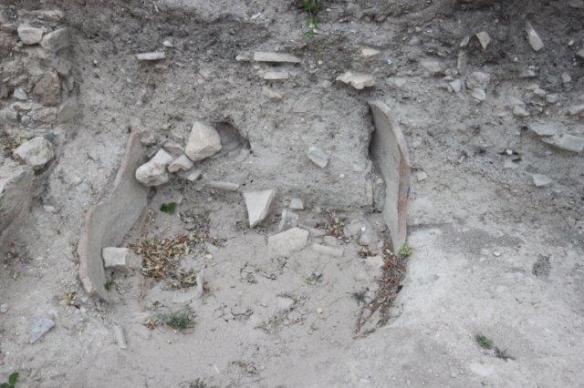 The next part of the site had not been fully excavated, but according to the guide we were at first floor level rather than ground floor level, looking into what could have been a courtyard.  The stone wall had been beautifully made and an exploration this year in the far corner showed that the wall continued a fair way below soil level.

The well will be excavated over the next few years – it might yield a great many artifacts!  An almost identical well exists on the adjoining property, where it still supplies fresh water. 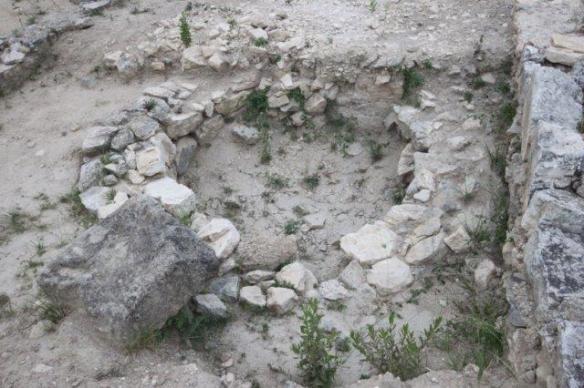 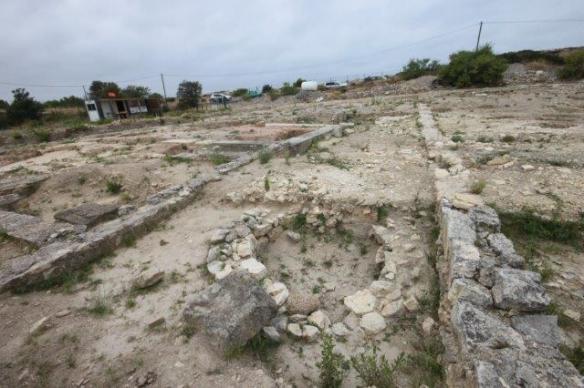 The next interesting exhibit was a Roman rubbish heap – if you look closely you can see layers upon layers of debris, which accumulated over time.

The channel might have been for drainage or supplying fresh water?

The square bricks were part of the hypocaust, the Roman underfloor heating, and apparently the hollow bricks were there to stop the others from bursting due to overheating!  This was where the second balnea of the complex was located.  Smaller than the first, and perhaps more for the officers than the sailors?

The rounded wall is not Roman but medieval and part of a storage silo.  The site was apparently inhabited quite late.

And finally we came to what is thought to have been the main building of the complex.  The walls were formed by huge stone blocks.

Internally the building was divided into four rooms by lathe-and-plaster walls.  The holes of the wooden uprights are still visible in the floor. 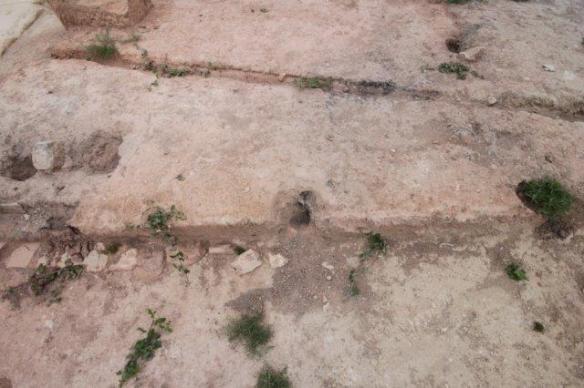 In one of the rooms a Roman weighing scale was found and there were many coins which were dug up, leading to speculations that this could have been some form of customs post.  The red colour of the earth floor could indicate that the building was destroyed by fire.

Now a few words on some of the finds in the display cases.  On the site a good number of pieces of terra sigillata have been found.  Terra sigillata is a kind of Roman pottery, which literally means “clay bearing little images”, and which was widely distributed throughout the Roman empire.  I adore the smooth, silky surface and the exquisite decoration on some of the pieces.  Apparently the maker’s mark is always stamped on the inside of the vessel 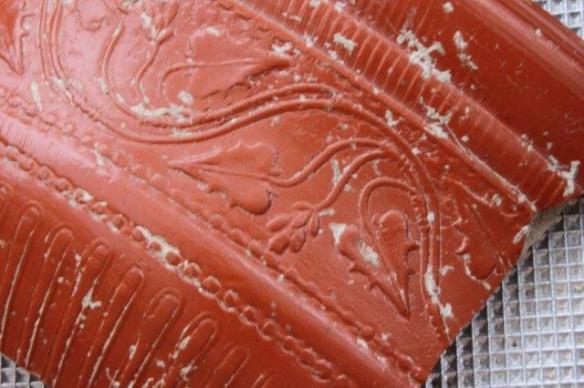 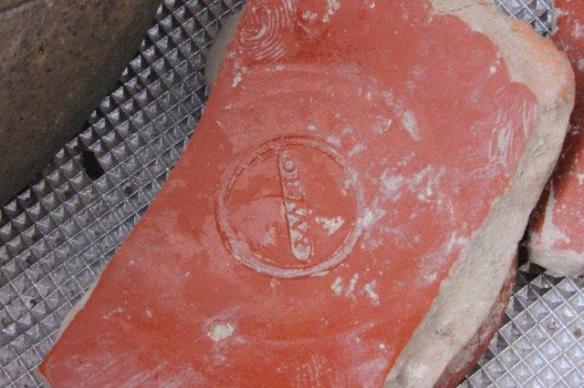 In the one box there was some other pottery, among them a very delicate bowl, the base of an amphora and also two oil lamps.  The larger one in the bottom right hand corner is very interesting as it is made of bone rather than the usual terracotta.  To my amazement the guide handed it round for everyone to have a good look, along with a few other delicate pieces of pottery.  It’s the first time that I’ve had anything this old in my hands!

Box number two contained other interesting bits found on the site.  In the top right hand corner is part of the mill stone (remember the mill at the beginning?).  Just to the left are four metal objects:  a hook and three nails.  The large encrusted piece is what a nail looks like before it is cleaned up.  On the very left is a piece of lead pipe and bottom left is an iron tool which was a kind of hoe.  The two small bits of bone are bovine teeth and I cannot for the life of me remember which animal the vertebrae came from.

So, if you are in the area during July and August, make the trip to Gruissan and see what the ground has yielded during the next season of excavations!

P.S.  Here’s a special thanks to Annie, my dedicated proof-reader, without whom you would have to endure many typos and errors!!  Thank you, Annie!