In Beziers (Languedoc) there is a very pleasant park in the heart of town, called Plateau des Poetes.  I’ve written about this park in some detail in an earlier post, which you can find here.  My most recent visit was prompted by a little flyer I picked up somewhere.

Beziers had a wonderfully prosperous time during the second half of the 19th century and the early 20th century.  Someone thought that it would be a good idea to capture some of the spirit of the fairgrounds of that era, and so the whole summer long a small fairground was installed in the middle of the park for the Fete 1900.  The fairground was essentially aimed at families with children, but I didn’t care!  I was a child once… 🙂

I went along one beautifully sunny afternoon in late August, when not many people were about.  The families with children were probably all getting everything ready for the rentree, when it’s time for the children to go back to school.

When I was little I used to love going on the swingboats, but that afternoon they were deserted, and those boats were too small for me to have a go on 😦

To one side of the fairground was the circular basin with a statue of a little boy, holding a rather large fish. 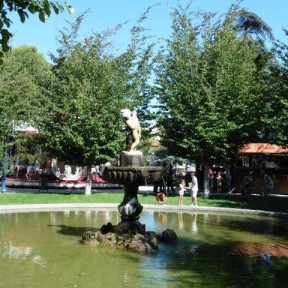 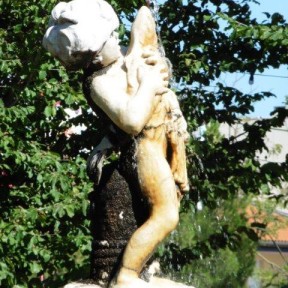 On the other side of the fairground rides was a kiosk, which sold drinks, snacks and ice creams, and there were tables and chairs in the shade of the ancient trees.  Guess what?  I just had to have an ice cream!! 🙂

After my ice cream break, I took a little walk to explore the rest of the park.  The park is built on a hillside, and on that hillside there is a monumental statue, which dominates the lower part of the park.  Near the fairground, the back of the uppermost part of the statue was visible:

I am not sure if that face is benevolent – what do you think?  From the bottom of the hill you get a great view of the statue – if you crane your neck a little!

In lower part of the park there are a series of ponds, populated by all kinds of animals.

The swan and the goose seemed to have something going between them, they were floating alongside one another all the time I watched them!  Could it be that this little creature below is one of theirs??  What, you don’t think so?? 😀 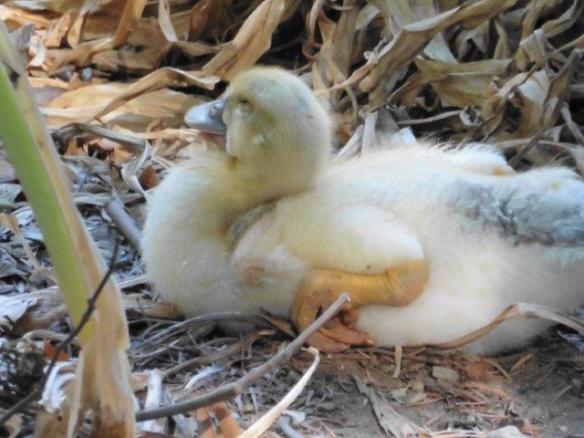 Just as I was about to leave the park, I noticed what looked like black lumps in amongst the foliage of some of the plane trees.  Closer inspection revealed the black lumps to be peacocks and peahens.  The males had lost their tail feathers, and all of the birds were high up in the branches, resting or grooming themselves.  I’ll have to go back in the spring, when the males will be strutting about the lawns in their full regalia!!

What a wonderful way to spend a summer afternoon!  I do hope that the Fete 1900 will be repeated again next year!