Last week it was time again to meet up with my friends for some more cooking and delicious food!  We met up in Caunes Minervois and the theme our friends had decided on was Indian food, to be precise Keralan.  And while I think of it – last year I wrote about the Open weekend at my friends nursery in Caunes Minervois   – so before I get sidetracked I wanted to let you know that this year’s open weekend will take place on June 1 and 2, 2013;  you can find details here; do visit if you are in the area!  The garden was already looking pretty good, and I’m sure you’ll find plenty to keep you interested.

End of digression – back to the food!  The choices for the menu had been made and it ran as follows: peanut salad, spicy prawns, spinach with coconut, fish baked in foil, vegetable sambar, rice, spicy pineapple.  The ingredients had all been prepared and soon we were all chopping, grinding, peeling, shredding and grating away, working on our recipes.  I’d elected to work on the spinach with coconut and the spicy pineapple. I was not entirely sure that I liked the idea of the spinach and coconut combination, but since we vowed to try new things I kept an open mind about it.  First catch your coconut, or in our case crack it open.  In the absence of a machete, we used a small axe and then the extracted flesh had to be peeled and grated, then ground to a smooth paste in a food processor with some chopped onion and garlic, and a little water. In one picture you see the paste along with some chopped green chili.  The sliced shallots and the halved chili pepper in the other picture are also for this dish.  The recipe comes from Madhur Jaffrey’s Flavours of India. 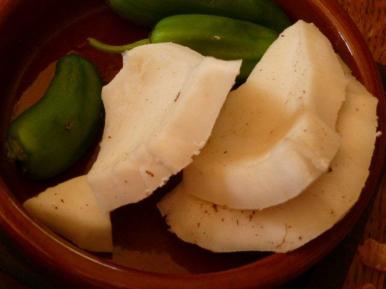 Once it came to cooking it was all very quick.  The shredded spinach was put in a large pan and put on gentle heat until wilted.  The coconut paste and chopped chili were then added in a well made in the middle of the spinach and allowed to steam for a little while.  In a separate pan we heated some oil and fried mustard seeds and rice until they started to pop, then added the sliced shallots, and cooked them to a golden colour.   The halved chili went in right at the end.  Then all was added to the spinach and mixed.  Of course since I was cooking I didn’t take pictures of the progress of that particular dish :-(.  But there are plenty of other photographs! 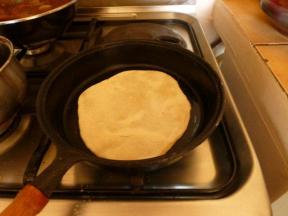 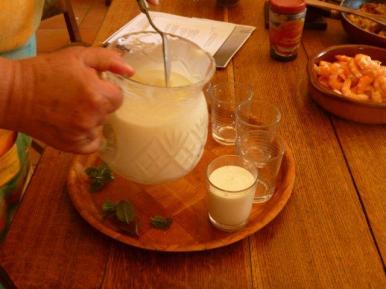 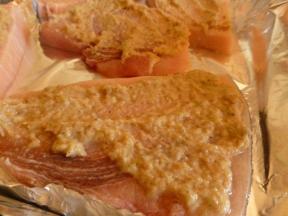 The spicy pineapple was good too – the pineapple was trimmed neatly, studded with cloves, then fried in a hot pan until golden all over.   It was roasted with a spiced syrup which had star anise, Szechuan peppercorns and cumin and had to be basted every five minutes – quite something!  It did have a gorgeous flavour though, and there were absolutely no leftovers 🙂 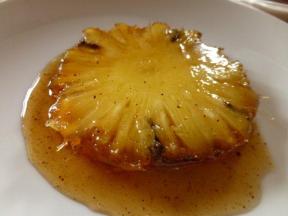 Here are pictures of the starters and main courses arranged on plates – very delicious!  Oh, and making chapatis was very easy and good fun!