Recently, friends invited me to join them for a visit to the theatre in Pezenas.  They had been telling me about this historical theatre for ages, and I had been longing to go – so this was it!  The theatre is tucked away in a narrow side street, and the facade of it is rather plain, save for a very ornate doorway.  If you look at the top half of the door casing there is nothing much to hint at what lies behind the entrance:

There are no flashing signs, no names up in lights!  With the large wooden doors closed it would look like many other buildings in Pezenas.  BUT, the wooden doors were open and allowed a glimpse into the foyer: 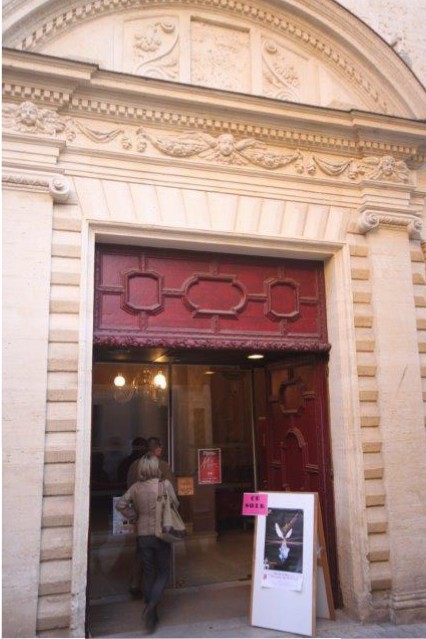 Very little is known of the early history of the theatre, but a description of it was made by the then town architect, Joseph Montgaillard, in 1855.  The town of Pezenas purchased the building in 1857, and in 1899 a series of renovation projects started, improving seating and stage machinery, as well as replacing the painted stage curtain.  In 1925 (!!) the theatre was electrified. I couldn’t find out whether it was lit with gas or candlelight before then. In 1947 the theatre closed down – I am assuming that it might have been due to the poor state of repair of the building.  You can find out a little more about the history of the theatre here.  There are also some pictures of it before the restoration began, on that website.

Work on the restoration didn’t start until 1998, after the theatre had been closed for more than 50 years!!  It finished with the re-opening of the theatre in 2012.  During those 14 years absolutely everything was worked on.  The building was made watertight, the interior restored and up-to-date technical services were installed.  Here is what it looks like today:

Door leading to the stalls

Detail of art deco decorations in the foyer

Auditorium of the historic theatre in Pezenas

The photo above is of the view from the first floor balcony straight down to the stage.  The walls in the stalls and on the balcony are covered with striped wallpaper, faithfully reproduced after fragments of the original paper.

More carvings on the front of the 1st floor balcony

A closer look at the stage

Decoration on one of the proscenium boxes

The ceiling was intricately painted and had been painstakingly restored:

Ceiling painting just above the stage

Flowers on the painted ceiling

The coat of arms of the town of Pezenas adorns the proscenium: 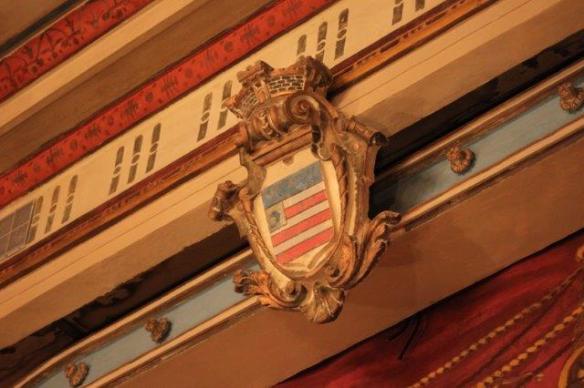 Coat of arms of the town of Pezenas

A new chandelier was created to light the auditorium:

Unfortunately the main stage curtain was not lowered during my visit, but apparently it is very much in keeping with the decorations you can see below: 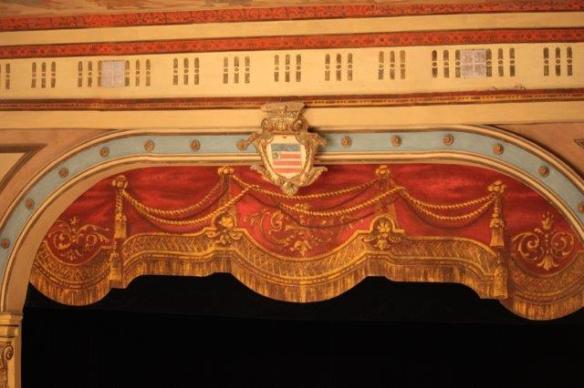 Top of the proscenium arch

Bit by bit the other patrons arrived, and the theatre filled up.  When it was time for the performance to begin the theatre was pretty full!

The auditorium filling up

During the performance I took no pictures – I was too self-conscious of the loud click of the camera, and aware that the pictures might not be all that good with the low lighting conditions.  The piece we’d come to see was L’homme qui voulait voir les anges, The man who wanted to see the angels.  It was an amazing mix of storytelling and music, performed by Kamel Guennoun and the Trio Zephyr. I was totally mesmerized and carried along by the story and the music.  The simplicity of it was breathtaking – only the four chairs on the stage and the lights, which dimmed a little at times, but that was it!  A totally amazing evening all around!