Summer is on the way, and in Saint-Chinian that means that there will be lots going on!!  We started with the festival Jazz au Cloitre last Wednesday and there are three more concerts: tonight, tomorrow and Sunday! 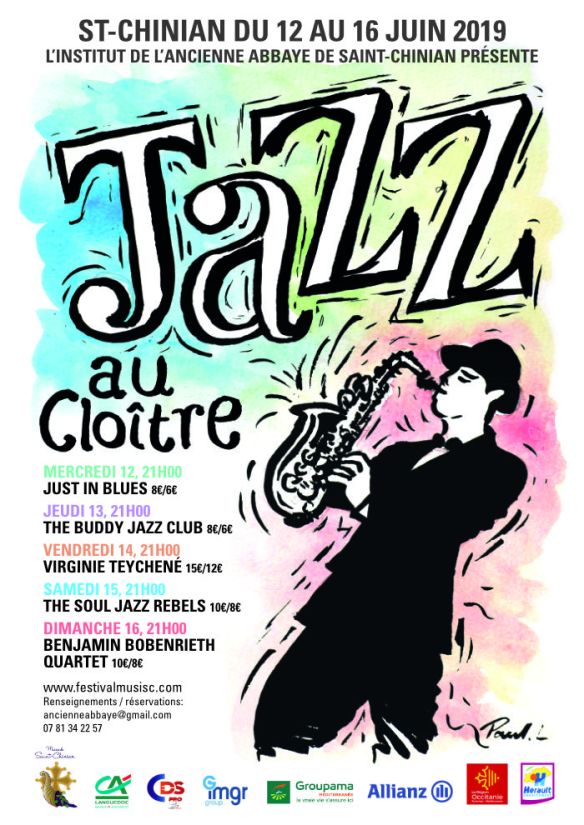 Throughout July and August, there are lots of things going on in Saint-Chinian: night markets are held each Tuesday evening… 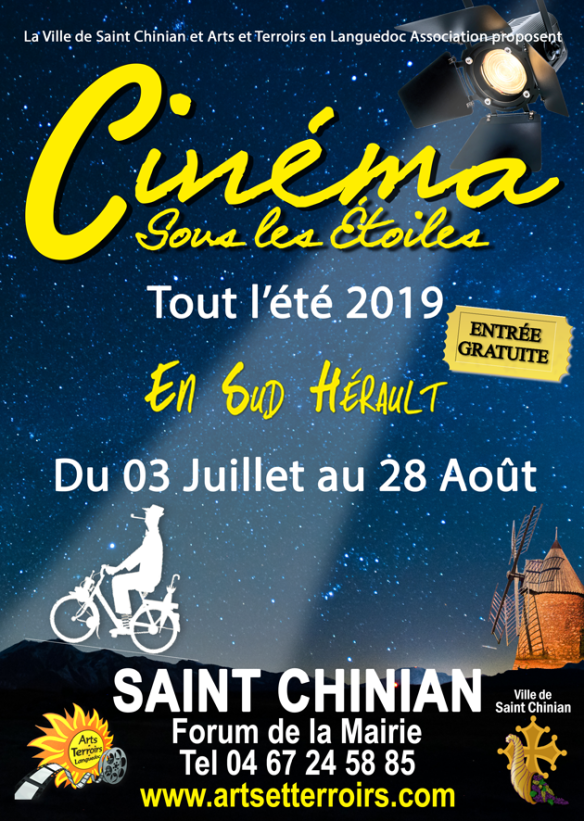 The Bastille Day celebrations are always worth a visit to France!  In Saint-Chinian the party is held over two days – on July 13 and 14, with big fireworks on July 14, followed by a concert on the main square. 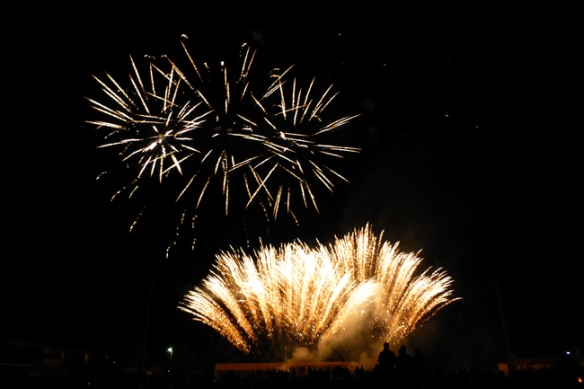 A week after Bastille day, on July 21, the main square in Saint-Chinian will be filled with rows of stalls for the annual Fete du Cru, the winemakers’ festival, where you can taste all kinds of Saint-Chinian wines! 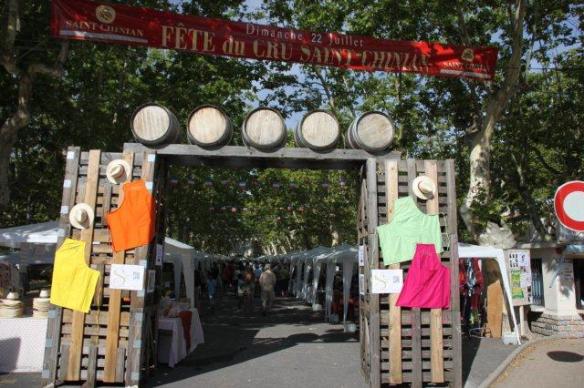 The Festival MusiSc takes place this year from July 22 to 28 – you can find the full programme here.

For wine lovers, the cooperative winery in Saint-Chinian will be unveiling a new painting on the walls of one of the wine tanks in the winery on July 26.  I’ve written about the Art en Cave project here.  A special cuvee, with a reproduction of the new painting on the bottle label will also be available that day!

On August 22, there’s more music with a concert by the Sinfonietta Bardou in the parish church of Saint-Chinian.  A programme can be found via this link.

If you are tempted to visit any of these events in Saint-Chinian, do let me know!  And if you are planning a holiday to the area, please have a look at www.midihideaways.com .

I hope you’ll understand that I’ll be hard pressed to write blog posts with so much going on.  So I’ll be taking a little break for the summer months, and I will be back with more stories in the fall.  In the meantime, I’ll be taking many photographs and will gather new material for new posts!!

I hope you’ll have a great summer too!

Last Friday, you received two posts almost at the same time.   You might have guessed that one was posted in error?  That’s what can happen when I try to do too many things at the same time!! 🙂  I was in the midst of preparing the first Annual General Meeting (AGM) for an association I am a member of – the Institut de l’Ancienne Abbaye de Saint-Chinian.

The AGM was that day, and it turned out to be a great success – 60 members came along to the meeting!  The official part was followed by an aperitif dinatoire, drinks with substantial nibbles!  In case you are wondering, the association organises the music festival in Saint-Chinian (this year from July 23 to 29, 2018), along with other concerts through the year.  You can sign up to become a member via the form on the association’s website – do join us, it’s a worthwhile cause!

I’ll be back next Friday with another full post – it’ll be about food!! 😉 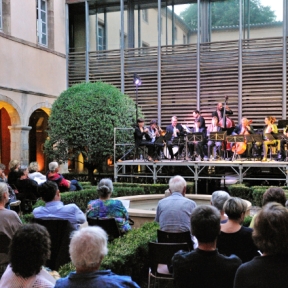 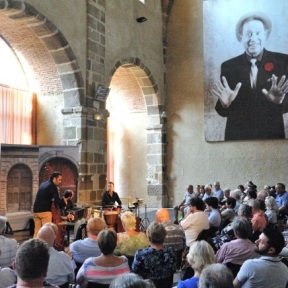 On June 21st, the whole of France celebrates the Fete de la Musique, with parties and concerts everywhere – and who am I to miss out on a party!!?? 😀

So I rounded up a  few friends and together we went to Beziers to see what we could listen to!  We left fairly early, and as we walked from the underground car park up the Allees Paul Riquet, it became clear that we had arrived a little too early.  But still, it was good to be able to have a look around without missing anything!  The food stalls looked colourful and the smells were tantalising!!

We headed for Place de la Revolution, where the Sardanistes would be dancing later in the evening.  The plan was to have dinner at Brasserie du Palais, and be able to listen to the music and watch the dancers from the comfort of our table.  On the way to Place de la Revolution I came across some interesting details.

The atmosphere in Beziers was very summery and festive – lots of people out in the streets, all getting ready to party in one way or another!

Our meal at Brasserie du Palais was delicious!  A large plate of tapas to share, followed by great main courses, and nice desserts.

The restaurant takes its name from the former archbishop’s palace, which is just across the square, and today houses the local courts of justice.  Next to it is the cathedral, and we had a fine view of that from our table. 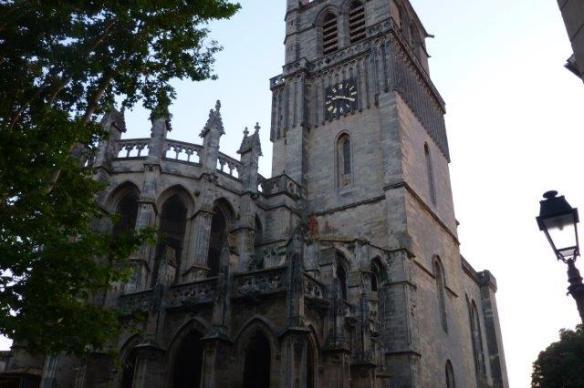 We were just about finishing our desserts, when the musicians started to gather on the stage, and it wasn’t long before they struck up their first tune.

And as soon as they started to play, the dancers appeared – at first only a few of them joined hands to form a small circle.

Now a word about the music and dancing – the Sardana is a Catalan tradition, played on instruments of which a few are not found elsewhere in France or Europe.  The band is called “Cobla” and the dancers are called “Sardanistes”.  For the full explanation please have a look at the Wikipedia entry, which I think explains it all very well.

I was watching in blissful ignorance, enjoying the uplifting sound of the music and watching the dancers with fascination.  It seemed as though anyone could join in, and the circle grew larger and larger, until it was all around the fountain and the square.  The steps seemed to be very simple – it was only later, when talking to a couple of the dancers, that I found out that there was a lot more to it! 🙂 . 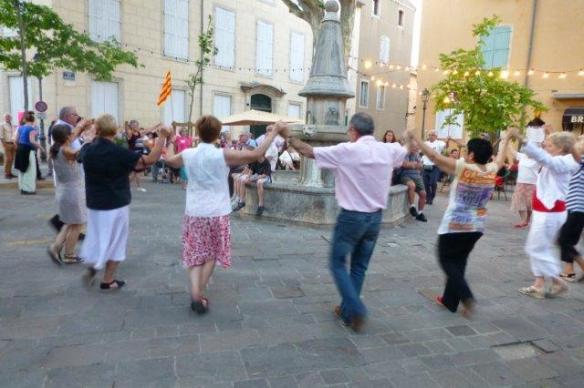 The band, as well as the dancers I spoke with, had come from Perpignan, where they had already performed earlier that day.  They explained that the Sardana is a traditional dance, as opposed to a folkloric dance, so nobody wears any special costumes.  Both the dancers were wearing the traditional espardenya shoes though – you’ll be able to see these shoes in the video below (e-mail subscribers, please visit the webpage to view the video).

Did you notice how the flute player also plays the tiny drum, which is strapped to his arm?  The double bass has only three strings, and its player is really going for it!  We sat and listened and watched, and enjoyed every minute of it!!

It was getting dark and the lights came on, and with the whole square alive with music and dance, it was just magical.

When we had had our fill of the Sardana, we wandered over to the cathedral, where another concert was just coming to the end:  Nicolas Celero at the piano, playing music by Franz Liszt, and Michael Lonsdale reading in between the musical performances.

On our way back we walked down Rue Viennet and passed Place du Forum, across the road from the town hall, which had all been transformed with strings of lights into the most magical of places. 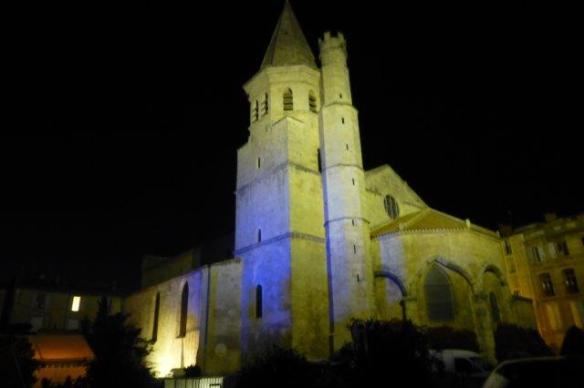 And then we reached the Allees Paul Riquet once more, and wandered amongst the many people who were either watching the act on the main stage in front of the theatre, or just enjoying the start of summer. 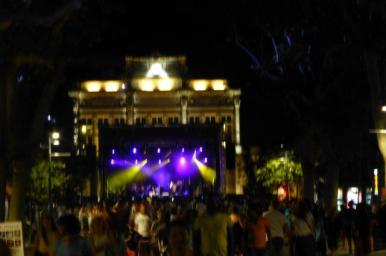 Mark your calendar for next year, and plan to be in Herault around June 21st – I promise you’ll enjoy the festivities!

Last week a friend from St Chinian called with an invitation.  There was a concert at the Guinguette Le Tournebelle that evening, and she would be happy for me to come along.  I had driven past the Guinguette, on my way from Narbonne to Gruissan, a couple of times, but had never actually stopped there.  A quick look on the internet showed that the music would be right up my street, so I gladly accepted the invitation.

Guinguette translates as tavern, and the tavern at Tournebelle is right by the Canal de la Robine, just past the Mandirac lock, outside of Narbonne.  If you plan to go, make sure you look at a map first; it’s easy to take a wrong turn.

We arrived in time to eat dinner, before the concert, and my friend had booked a table for the four of us.  The Guinguette Le Tournebelle is basically one large room, possibly a former barn, with a raised stage at one end, and a bar at the opposite end.  Along the outside of the building, and overlooking the canal, a covered pergola has been added, with the open sides closed in with see-through plastic for the winter months.  I imagine that it will be a perfect spot for sitting out, as soon as it gets warm enough.  Inside though, a number of people were already at their tables, amongst them the musicians for the evening, and the mood was relaxed and friendly.

Dinner that night was a three course fixed menu, all freshly prepared, with the dishes selected by the chef.  The starter was a creamy soup made with sweet potato and coconut milk, subtly spiced, and accompanied by a gratinated salmon toast. 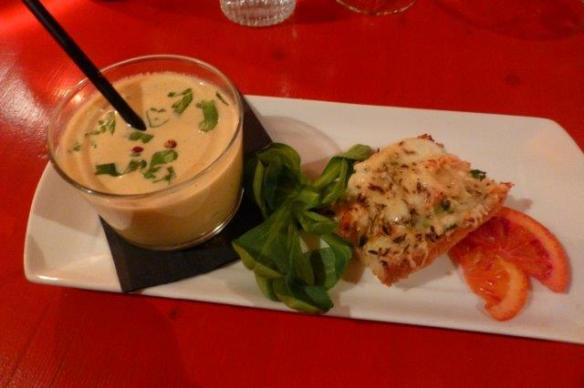 The main course was delicious too: slices of filet of pork which had been covered in a hazelnut and breadcrumb coating and fried, served on a bed of sweet red cabbage. Alongside was a little mound of truffle flavoured whipped cream, a cherry tomato roasted with balsamic vinegar, and some roasted potato wedges.

Dessert arrived just as the concert was about to start and the lights were dimmed, so I’m sorry there is no picture.  It was a delicious and refreshing tiramisu, where the usual sponge had been replaced with speculoos, spiced shortcrust biscuits.

The musicians for the evening were Jorge Rossy from Barcelona, Gabrielle Koehlhoeffer and Joel Allouche, both from Montpellier.  They had met at a festival the previous year, and decided that they should play a gig together, since Barcelona and Montpellier are not that far away from one another.  We were privileged to be in the audience for that gig!

Jorge Rossy, who headlined the evening, is a very talented musician, well-known as having been the drummer for the Brad Mehldau Trio.  He has also studied trumpet and piano, and this evening he was playing piano and vibraphone.  Gabrielle Koehlhoeffer, on double bass, is a passionate musician with a doctorate in pharmacy, who came to playing jazz when she was 15 and has enjoyed herself ever since.  Joel Allouche is a mover and shaker in the regional music scene, as well as a composer, and a very good drummer!  I hope you’ll enjoy the video below.

The Guinguette Le Tournebelle is open for lunch throughout the year Tuesday to Sunday.  Live music is played every Friday night, and if you want to go for dinner on a concert night I would strongly recommend that you book your table in advance.