The above definition comes from the Collins English Dictionary.  Transhumance seems to have been around as long as animal husbandry.  It is practiced wherever the seasonal conditions mean that it’s better for livestock to move to a different place.  For example, think of the alpine pastures that are rich and lush in the summer, but are under a thick layer of snow during the winter.  Or think of the coastal plains of the Languedoc, which grow lush during the winter but dry out during the summer months.

The village of Vendres is situated close to the coast, just beside a lagoon, and there is a lot of grazing land around it – the ideal area for a flock of sheep!  Grazing plays an important part in maintaining the ecosystems of the somewhat marshy lands, and in reducing the fire hazard that un-grazed land would present during the hot summer months.

The highlight of the day was the procession of the flocks of sheep through the village, accompanied by riders on horseback.  First though came the marching band! 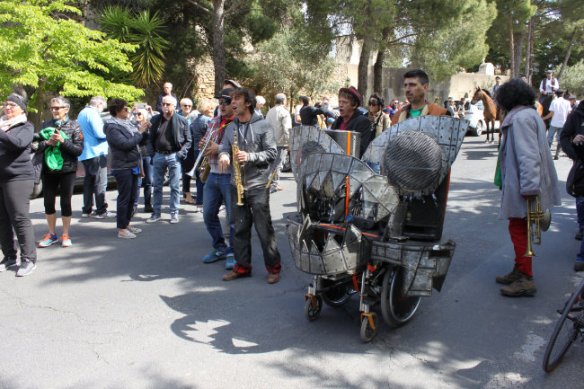 Closely behind them were the horses… 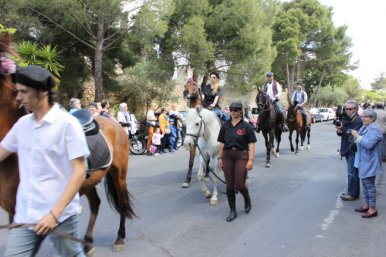 …and then came the shepherds and the sheep!  I’ve seen sheep before, but seeing a huge flock of sheep arrive in a village is something I’d never experienced! 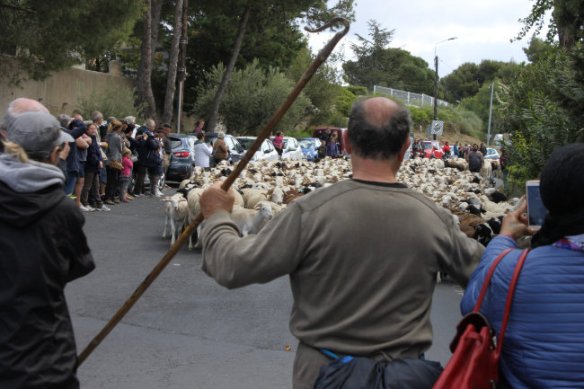 The sheep seemed to be going round in circles, pushed one against the other, with the whole flock moving very slowly towards where I was standing. 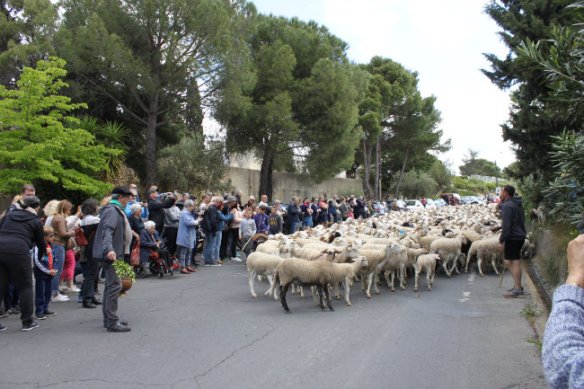 The man standing to the left in the above picture was holding a branch, with which he blessed the sheep by sprinkling holy water over them. 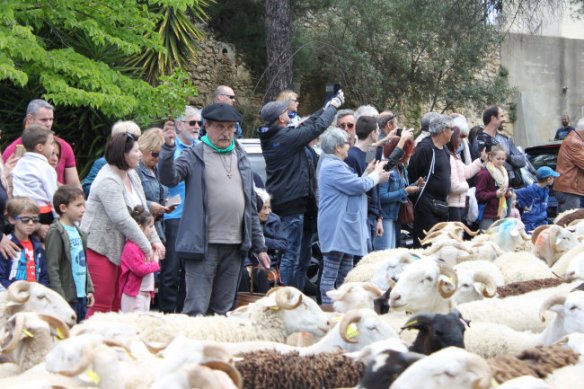 Finally, the sheep made off down the road, but there were sheep as far as I could see!! 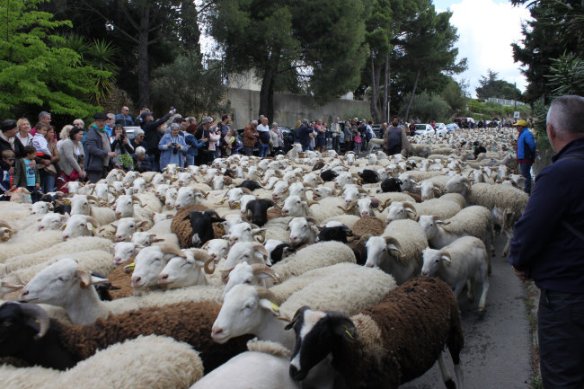 More shepherds and a couple of sheepdogs brought up the rear, and everyone followed them down the road and into the village. 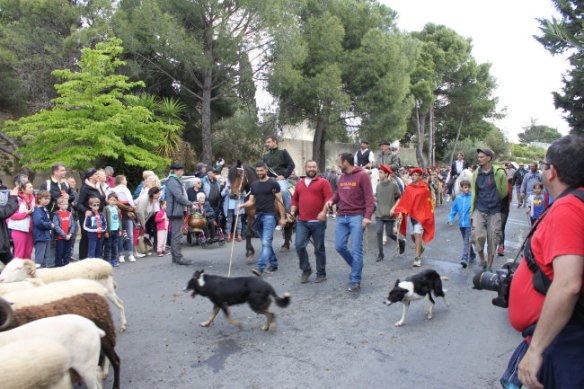 We took a shortcut to get to the Place du Lavoir where a small market and a communal meal had been set up.  To my surprise, the sheep came right past that square – once more it was wall-to-wall sheep!! 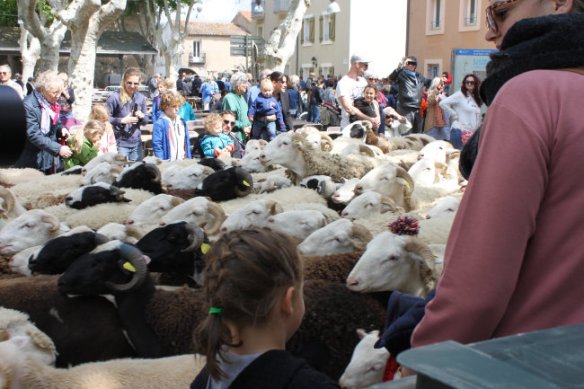 By the old lavoir, the open-air wash house, barbecues had been set up, and people were preparing salads on long trestle tables.  On the bouledrome next to the lavoir, tables and chairs had been prepared for 600 people – they were expecting a crowd!! 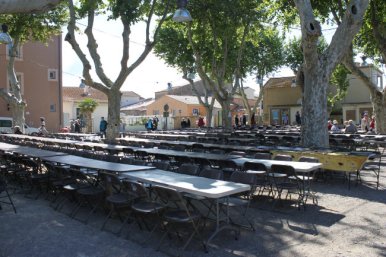 Come 12.30, the tables were pretty much filled up and people were queuing to get their lunches.  The atmosphere was great – lots of laughter, families meeting up, strangers making new friends, children running through the rows!  Some people had even brought table cloths for their tables, along with real wine glasses! 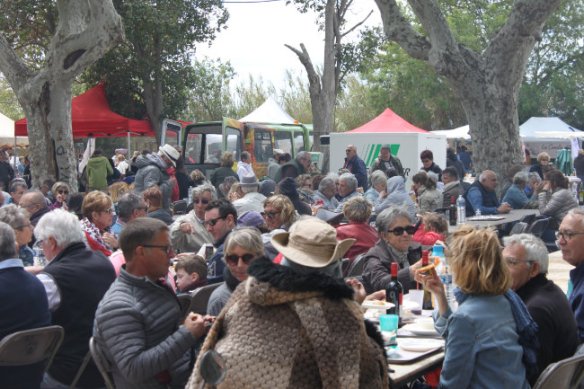 On my tray I had the following:  green salad with tomatoes, onions and olives, grilled lamb with boulangere potatoes, a slice of sheep’s cheese, a slice of apple tart, a piece of bread (very important, we are in France after all!!) and, also important, a quarter of wine (in a plastic beaker).  Everybody else’s trays were the same, by the way!! 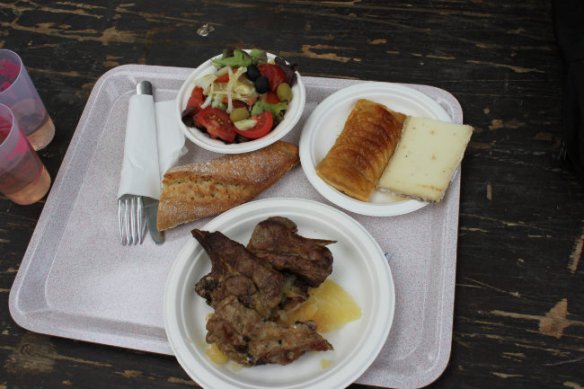 The food was all very good, and there was plenty of it!  The lamb was locally raised and the cheese was produced with milk from the flocks we had just seen.  The apple tart was divine!

The market stalls next door to the bouledrome had a variety of items on offer: wine, honey, plants, cakes, hams and sausages, cheese, knick-knacks, etc. My favourite pretzel lady was there too!! 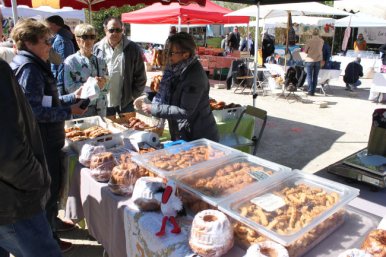 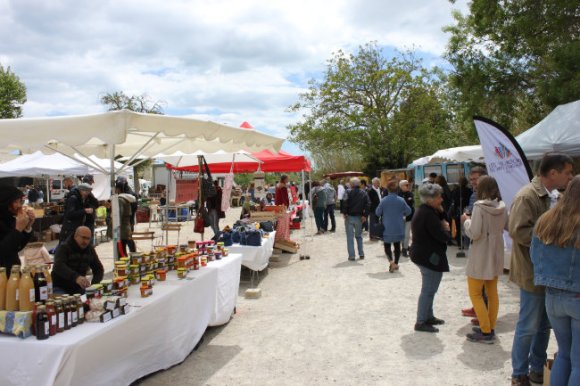 It’s definitely a fete I’ll be going to again – the meal alone is worth the trip!  Keep your eyes peeled for details of next year’s Fete de la Transhumance.  You’ll be able to find details on http://www.ladomitienne.com