The village of Roquebrun is nestled against a steep hill, with the river Orb flowing at its feet.  The road twists and turns as you approach the village from the direction of Cessenon, passing the tiny village of Lugne, before crossing a range of hills.  Just past the top of the hill, as the road starts to descend again, the most beautiful panorama opens up.  There below is the Orb valley,  a lush and green expanse of fields and vineyards.  And in the distance you can see Roquebrun.  If you drive that way, think about making a stop at the little pull-in to take in that view!

The site where Roquebrun is today, has been occupied by humans for a long time.  Pre-historic and Roman vestiges have been found, and around AD 900 a castle was built, of which the tower is still standing, to protect against invasions from the south.

With the castle to protect them, people began to construct a village below and around it.  In turn this village got its own fortifications.  The medieval layout of that village can still be experienced as you walk up towards the tower, through narrow streets and passages.  The driver in the car was not from these parts.  He very nearly wrote off the car at the point  where it is in the picture below.

The passage of time can be seen in many charming ways on the streets of Roquebrun. 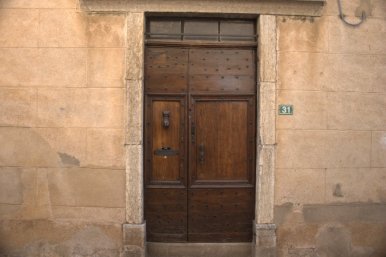 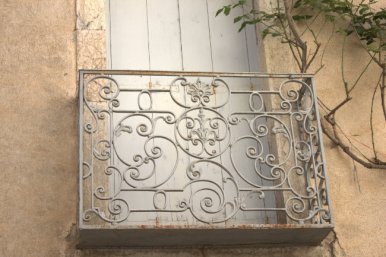 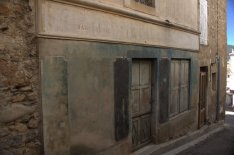 When early man settled in Roquebrun, one of the reasons was no doubt the microclimate that prevails.  Visit the village at the right moment – such as right now – and the air will be heavy with the fragrance of citrus blossoms.  It’s a beautiful fragrance, and there are citrus trees all over the village!

My destination was the Jardin Mediterraneen, which was created just over thirty years ago.   On the way to the garden I passed “La Rocheuse” – it’s a perfect house to rent if you want to stay in Roquebrun! 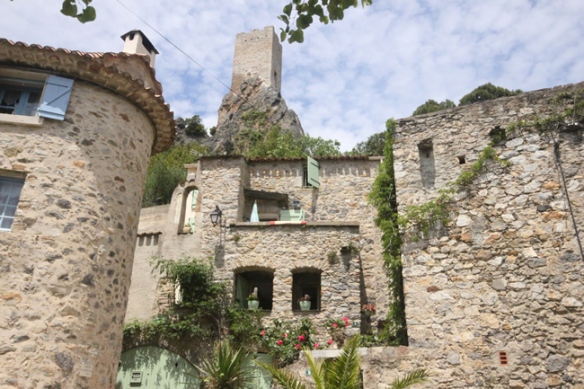 The microclimate of Roquebrun means that the plants which flourish here would have a hard time elsewhere in this area.

As you walk up towards the garden, there are signs in several places!

The garden was created on abandoned land above the village, and like most gardens it is a work in progress!  To date about 1000 tonnes of materials have been moved (stones and building materials) by donkeys and humans.  Since it’s almost at the top of the hill, your climb is rewarded with spectacular views!

Over 4000 plants from 400 odd species are being grown here!  I’ve been to the garden many times over the years, and have watched it evolve, and I feel that right now it is looking the best it ever has!

I would love to be a specialist on plants, but I still have a lot to learn.  The garden specialises in Mediterranean plants, plus cacti and succulents.  Here are some flowers: 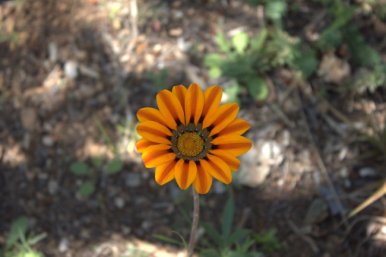 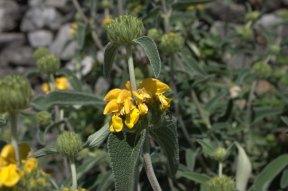 And some plants which I would class as cacti (feel free to correct me if I’m wrong):

The microclimate at the garden is helped by the range of dolomite rocks, which store and refract the heat. 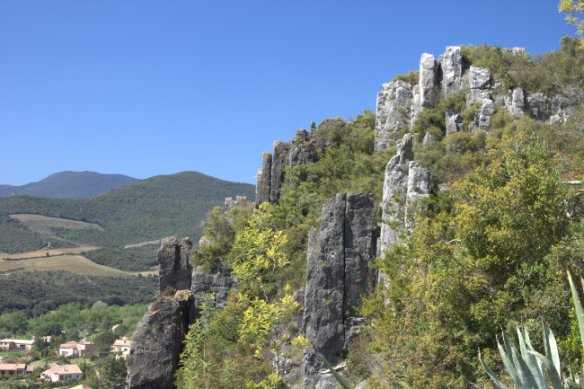 In this type of environment water is scarce, so only plants that have successfully adapted to the drought-like conditions will be able to survive.  After the spring rains, the garden is looking very lush, but even at the height of summer there will be something of interest!

Right at the top of the garden an enclosure has been built, to house two goats.  Their job is most likely to keep the undergrowth down!

From the goat enclosure I got a good view down towards the tower and the village – this was very high up!!

Several years ago, the ancient tower was restored, to stop it from falling apart.  In the picture below you can see quite clearly the square holes in the walls near the top of the tower.  These holes would have held beams which supported a wooden walkway.  The crenelations were added later.

From the viewing platform below the tower, stone stairs led down to the level of the entrance to the garden, past some lovely cistus bushes.  The bees were having a feast on the beautiful pink flowers!

The visit to the Mediterranean Garden was coming to an end, but the visit to Roquebrun was far from over.  On the way down the hillside, I snapped some more pictures! 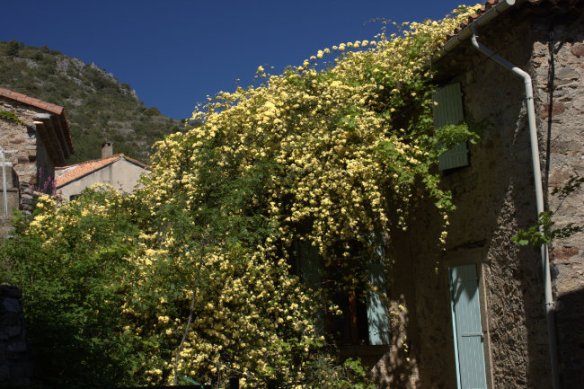 Another ancient door, with a marble door surround: 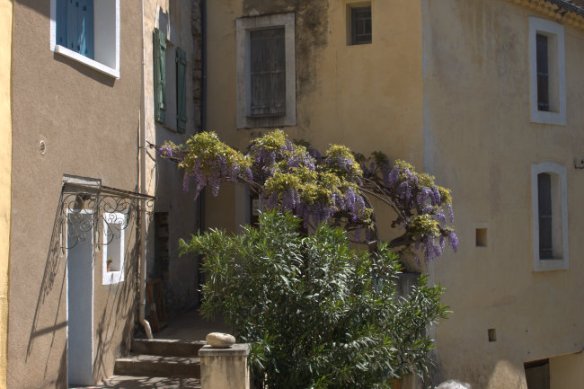 On Rue des Orangers, which runs along the river, is a restaurant called Le Petit Nice.  Its dining room has lovely views of the river, and this is where my friends and I had a bite to eat after all that walking!

Snails with garlic and parsley butter

I’m not sure that we had walked off as many calories as we consumed, but I have no regrets – the meal was absolutely delicious, and the service so very friendly and efficient!

On the way back to the car there was one more remarkable sight – the esplanade which overlooks the river was renovated a few years ago, and planted with various climbing plants.  I was there just at the right time to see the beautiful wisteria flowers!  Two different kinds of wisteria, one a deep purple with double flowers, and the other with almost pink single flowers – stunning! 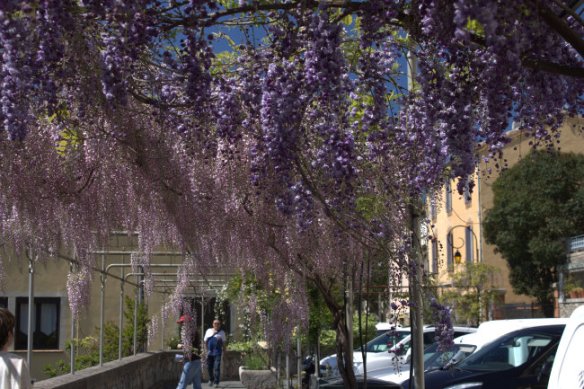 If you are in the area, be sure to visit Roquebrun.  It’s a beautiful and historic village with many attractions!