There are big pictures all over the place – murals that cover entire sides of buildings.  I’ve often heard them called muriels – have you heard them called that too??  In French, murals are often called trompe l’oeil, literally translated as “deceive the eye”.  Some of the murals in the following pictures are incredibly convincing and live up to their trompe l’oeil name!!

The first one is in Lodeve, and it is a very good example of a trompe l’oeil, as it blends real with fake – can you tell which windows are real and which are not?

The following mural is in Montpellier – the walls are pretty much flat, but the painting’s perspective makes it look incredibly 3D! 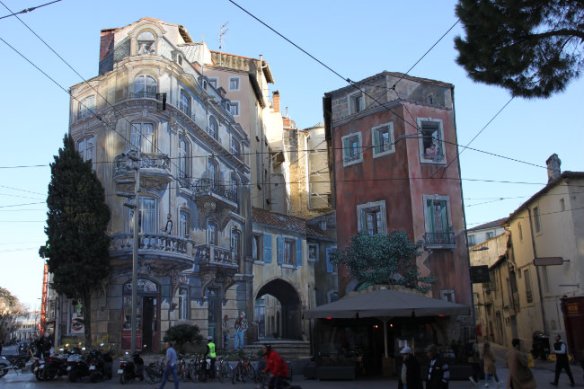 The next mural is in Capestang, just right around the corner from the restaurant La Galiniere.

Beziers has a good number of murals – here is the oldest that I know of:

There appears to be a theme to the more recently painted murals in Beziers: famous artists and their works!

Here is L’Arlesienne by Georges Bizet: 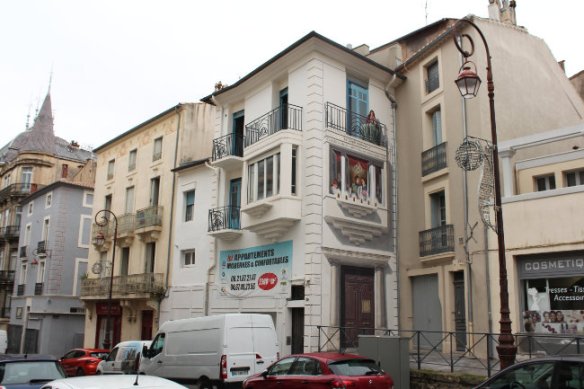 Jean Moulin, a native of Beziers and a hero of the Resistance, opened an art gallery in Nice as a cover for his resistance activities.  The following mural commemorates Jean Moulin and his gallery:

The mural in the last picture of this post is on a newly created square in Beziers.  The mural hides a series of what I imagine are run-down houses awaiting renovation – a pretty neat idea! 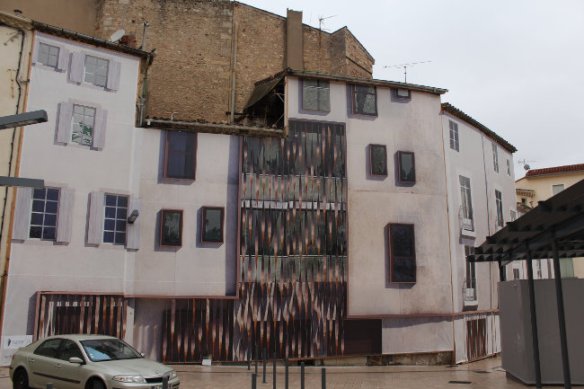 This was to be my last article of 2019, but somehow it never got posted and ended up in my drafts folder!  Since I wrote this post, Saint-Chinian has unveiled its own trompe l’oeil. It’s not quite finished yet, so I’ll post a picture of it when it is.