The third Thursday of November marks the release of Beaujolais nouveau, a newly made wine which has just finished fermenting.  There is quite a bit of tradition surrounding this event, which has been going on since the 1950’s – the Wikipedia article about it can be found here.

The wine producers in our area thought that the idea of vin nouveau would be too good an opportunity to miss, so several producers offer a vin nouveau or a vin primeur, two names for the essentially the same product: newly made wines which are bottled and sold shortly after the wine has finished fermenting.  These wines are usually characterised as being light, fruity and easy to drink, preferably slightly chilled.  It’s a real treat if paired with roasted chestnuts!

This year, I found that the cooperative winery in Saint-Jean de Minervois was doing their version of the vin nouveau, offering a Muscat de Noel, a Christmas muscat! 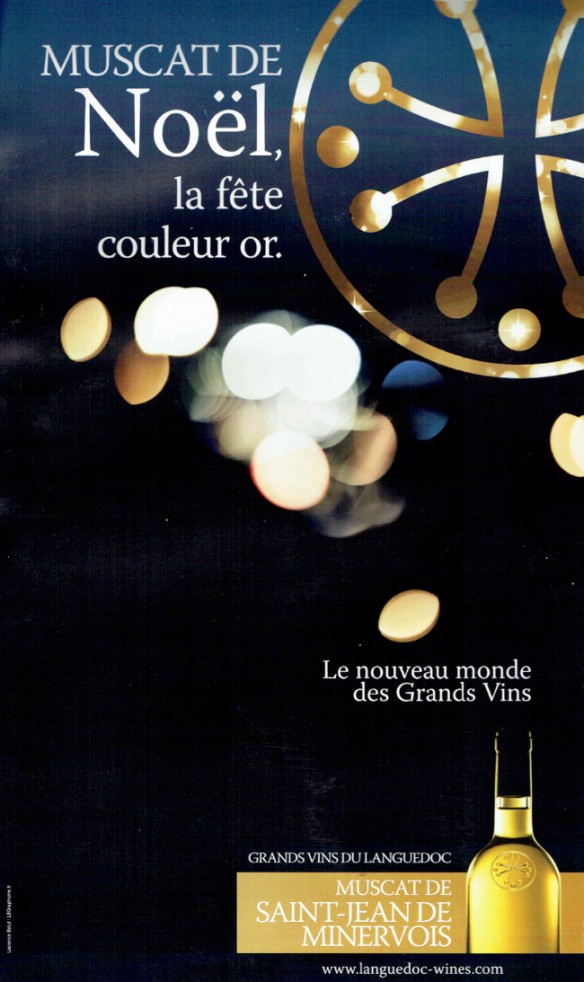 I had to make a trip to Saint-Jean and try the muscat for myself, purely in the interest of research, you understand! 😉 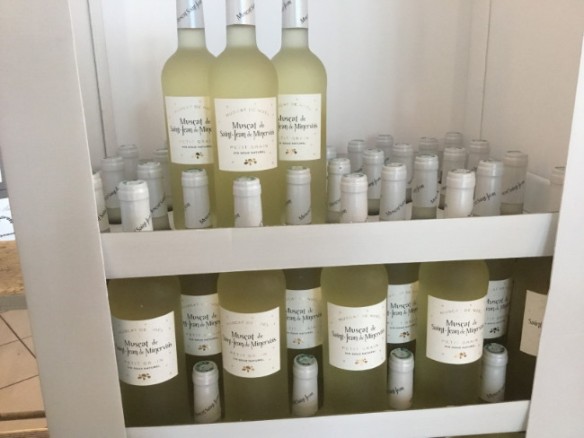 The day I visited the winery, the space out front was stacked with pallets of empty bottles! All of these would be filled up in due course! 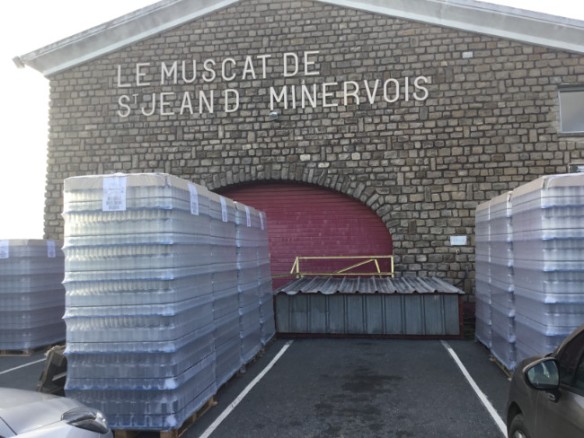 The Muscat de Noel is the first muscat to be drawn off and bottled from this year’s vintage.  I tasted it in tandem with another muscat from the winery in Saint-Jean, Eclat Blanc, which the lady behind the counter told me was the closest equivalent.  The comparison was very interesting, with some marked differences between the two wines.  The Muscat de Noel had a much fruitier taste and a lovely smell (nose) of pineapple.  It tasted as though there was not much alcohol in it, even though it packs a punch with 15.5% alcohol, and it was far too easy to drink! 🙂  The Eclat Blanc muscat was a very elegant wine, with a very good balance between fruitiness and acidity.  The alcohol content was the same, but somewhat more in evidence!

A sweet Muscat de Saint-Jean de Minervois wine is ideal as an aperitif before the start of a meal, with foie gras (duck or goose liver pate), or with some nice blue cheese such as Roquefort.  It can also be used in cooking – I made a very delicious flan, which was flavoured with muscat!

A friend recently told me of a cookery programme she had watched on UK television.  She was intrigued by a recipe for a flan made with Muscat de Saint-Jean-de-Minervois wine, and she was very keen to try it out.

We made a date for us to cook this together, and I watched the video, to see what it was all about.  The recipe comes from Hairy Bikers’ Bakeation (pronounced like vacation?), and was first shown on Television on April 24, 2014.  The show featured recipes for an apricot tarte tatin, brioche sausage rolls, praline brioche, and the flan de Saint-Jean-de-Minervois.  Out of those recipes, I will definitely try the apricot tarte tatin, next year when apricots are in season again.  I will include the video of the flan at the end of this post, and I’ll get to our flan experiment in a moment, but first a little about the Muscat de Saint-Jean-de-Minervois wine.

As its name implies, the wine is made from muscat grapes.  The Muscat de Saint-Jean-de-Minervois is produced in a small area around the little village of Saint-Jean-de-Minervois, which is located 12 km south-west of Saint Chinian.  The vineyards are on a limestone plateau at an altitude of 220 to 270 metres.  The grapes used in the production are a variety called petit grain, and indeed the individual grapes are very small.  As you approach the village, you’ll notice the vineyards where the plants seem to rise from a white soil.  The white colour comes from limestone rocks, bleached by the sun.  It is one of the many aspects of the “terroir” for this wine. 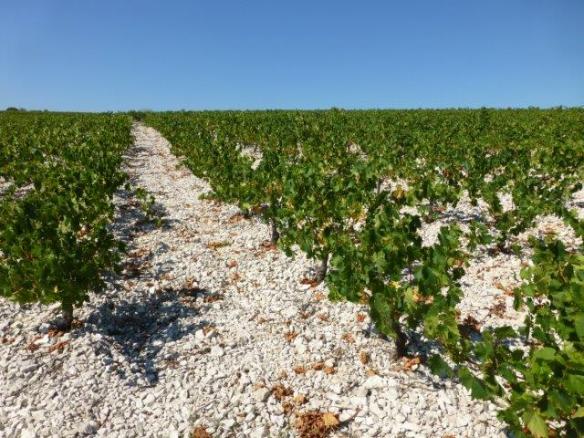 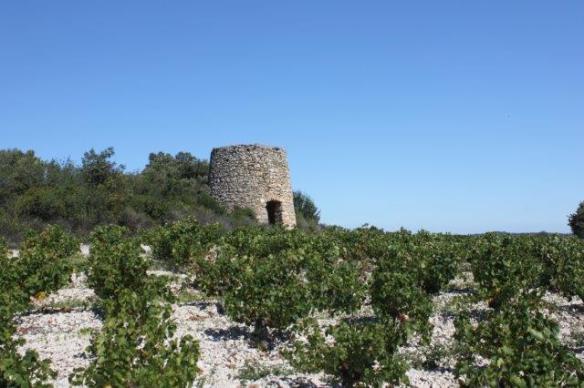 Harvest of the muscat grapes usually takes place during the first half of September, and I was very lucky to catch some of it.  The vineyards above had already been harvested, so there were no grapes left.  But just past the cooperative winery in Saint-Jean I spotted a tractor and several people in a vineyard. 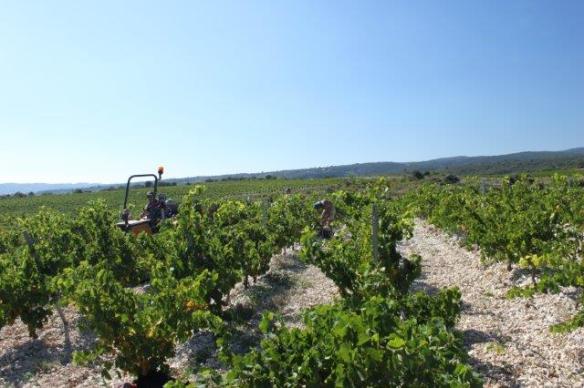 All of the picking of the muscat grapes is done by hand.  I imagine that the grapes are too delicate and small to be picked by machine, although an engineer could probably find a solution if that is the problem.  Still, I like the fact that it is all hand-picked! 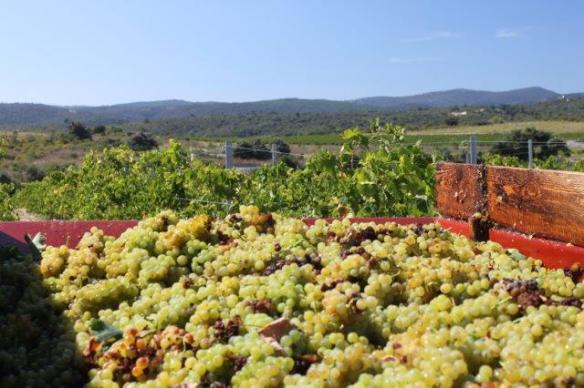 The view of the trailer full of grapes was delicious, and the smell….  I leave you to imagine that :)!  The grapes were perfection, with tiny little spots of brown, typical for this grape variety. 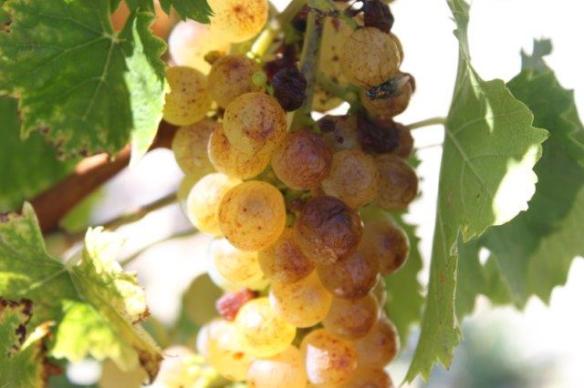 The lady in charge of the vineyard insisted that I take some grapes with me.  She fetched some secateurs, and proceeded to look for some choice bunches of grapes.  The very small, shrivelled up grapes were the ones I enjoyed best.  They tasted like sun-dried raisins, only better!

Next I went to the cooperative winery, where I quizzed the lady behind the counter.  The Cave Cooperative produces three different kinds of muscat wine. The Cuvee Petit Grain is the entry level muscat, with a nose of ripe fruit (apricot jam) and lime flowers, and a honey like finish. This wine is good with grilled chestnuts, blue cheese and apple tart. 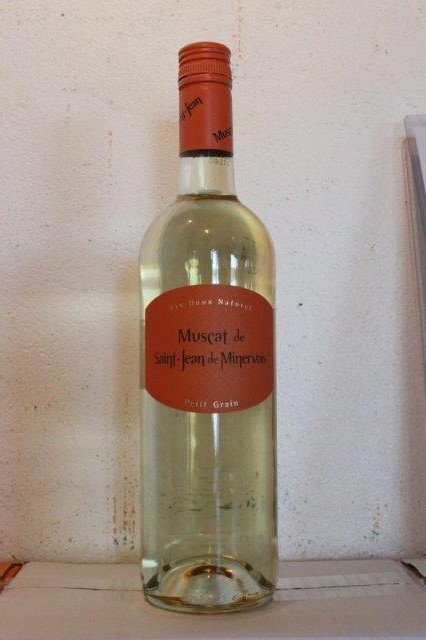 Next up is the Cuvee Selection, blended from the best batches of muscat of any one year.  The colour of this wine is somewhat paler than that of the Cuvee Petit Grain, and it has a strong nose of fresh fruit (mango and litchi) and thyme flowers, with an aftertaste reminiscent of fresh figs.  Just so you don’t think I’m making this up, the information comes from the official tasting notes :)!  This wine goes well with foie gras, melon, strawberry soup, and braised turnips from Pardailhan. 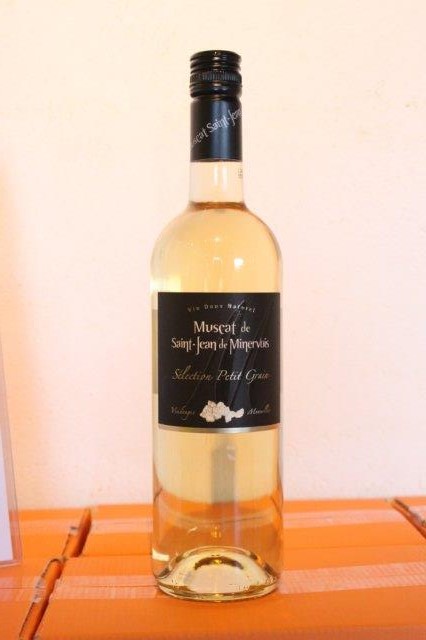 The top-notch muscat is called Eclat Blanc, and of the three is the one I like best.  It has an incredibly pale colour, and a nose of lime flower, acacia, citronella and clementine.  There is a wonderful balance of sweet and acid, and it has great freshness and finesse.  Apparently you can drink this wine with your whole meal.  I don’t think I would though, as at 15% alcohol it is rather strong. 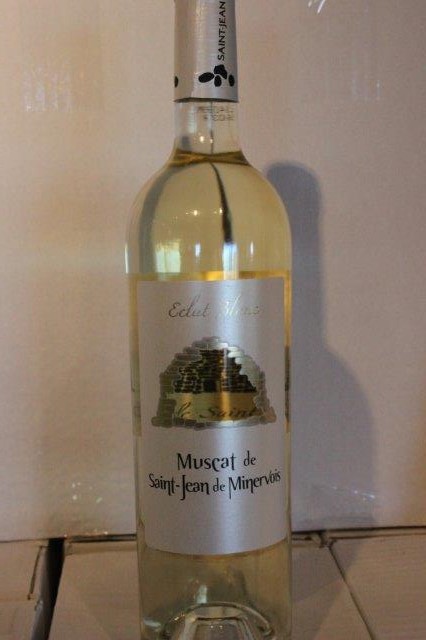 The reason the muscat wines are so strong lies in their vinification.  The fermentation of the wines is stopped at a certain point by adding alcohol, which preserves some of the sugar present in the grape juice.  If the grapes are harvested a little earlier, and the wine is left to ferment naturally, you end up with a Muscat Sec, a dry muscat wine, which has the wonderful floral notes on the nose, but none of the sweetness when you drink it.  The cooperative winery produces a number of other wines apart from muscat, including a sparkling wine made with muscat sec, and red and rose wines.  The picture on the left shows a selection of bottles of muscat from the winery through the years, and the display in the picture on the right shows all wines currently for sale. 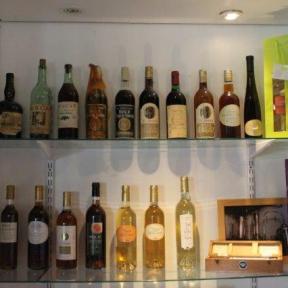 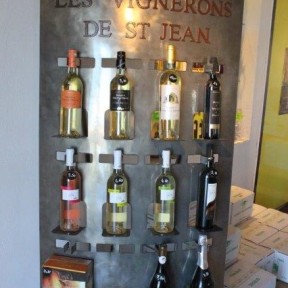 By now you’re probably wondering if we will ever get to the flan!  Yes, we will – we’re starting right now!!  The ingredients are simple:  milk, eggs, sugar, muscat, lavender honey, and orange zest. 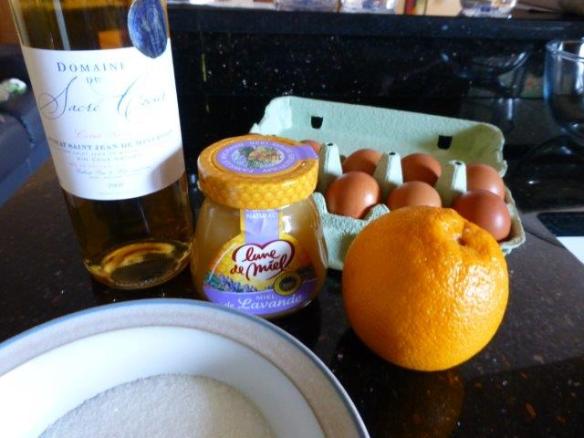 The muscat we used came from Domaine Sacre Coeur in Assignan – there are a number of independent producers of Muscat de Saint-Jean-de-Minervois, in addition to the cooperative winery.  None of the preparation of the flan is very complicated.  You will find the entire recipe here.  Having watched the video and read the recipe, I’m relieved to see that they do not specify a non-stick pan for making the caramel in the recipe.  To my mind using a non-stick pan when cooking sugar is a total no-no – the temperature rises far too high, potentially damaging the non-stick finish, and releasing who-knows-what in the process.

First of all we made the caramel – in a heavy stainless steel pan.  The trick with caramel is to keep your nerves: it has to be a good colour, since it won’t get any darker during the cooking process which follows.  At the same time, it will continue to cook somewhat, once you have poured it into the tin, so you have to catch it at the right moment.  Here’s what mine looked like: 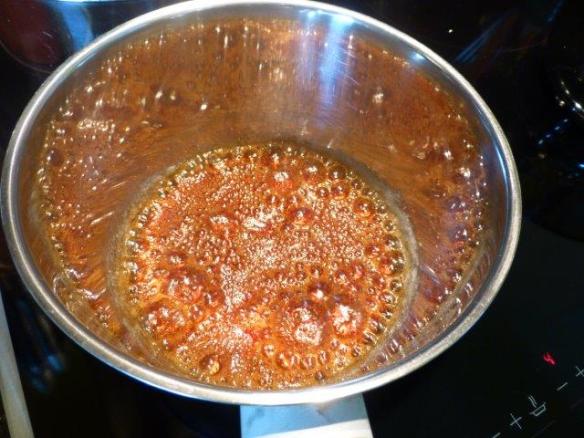 Immediately after I took the picture I poured the caramel into the waiting brioche tin, and swirled it around.  The tin did get quite hot, so oven gloves or a cloth to hold the tin with are a very good idea.  And don’t get any caramel on your hands! 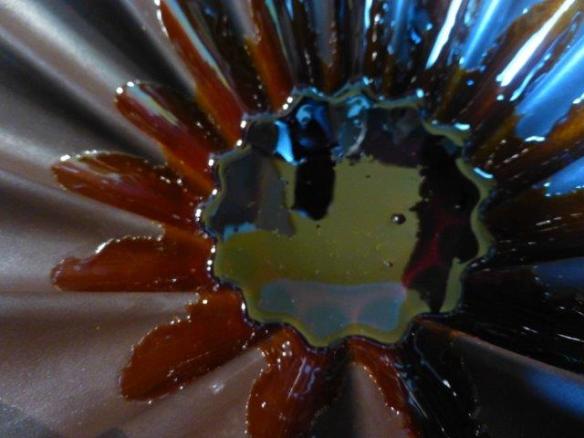 At the same time as the sugar was cooking, we heated the milk and infused it with the orange zest and the lavender honey: 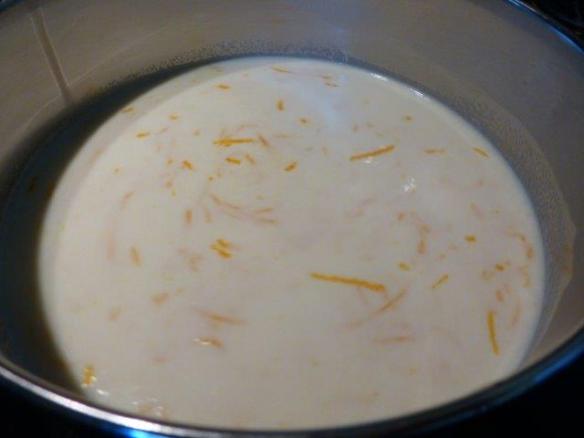 And when the caramel was cooling in the tin and the milk sufficiently infused, we cracked the eggs into a bowl, beat them well with the muscat wine, strained the infused (and slightly cooled) milk onto the beaten eggs, and then poured all of it into the prepared brioche tin. 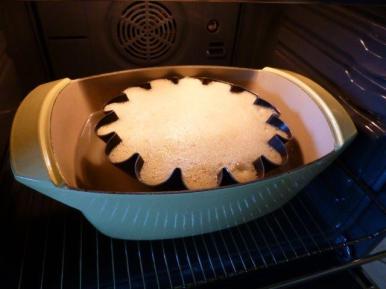 The tin was placed inside a cast iron casserole, and boiling water poured in to a height of two thirds up the side of the flan tin.  The flan required five minutes more cooking time than the recipe indicated, and it was covered with tinfoil part way through the cooking. 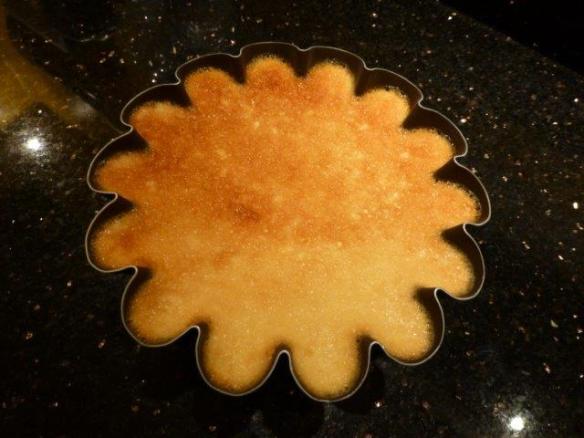 A couple of days later I had dinner with my friends, and we had the flan for dessert.  Un-moulding it was a little nerve-wracking – would it come out OK and in one piece?? 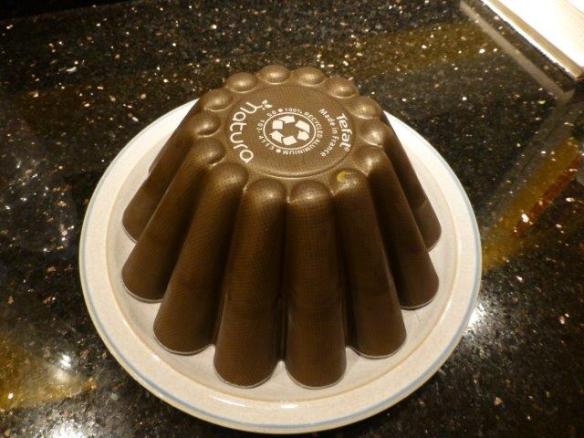 The caramel showing around the tin is a good sign – it means that the flan has released.

But will it be all in one piece and looking pretty??  Find out: 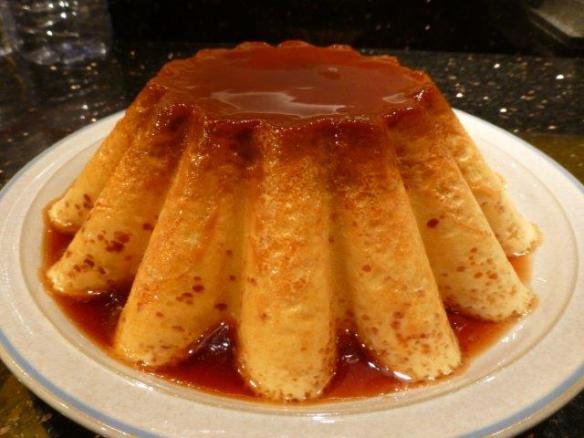 Yes!!!  We did it 🙂  And I think it looks even prettier than the flan on the TV show, but then I am biased!!  The texture was lovely and silky, the taste was good, but I could not taste the muscat, and I felt that it could have been a little sweeter.  All in all it is a great dessert, and very easy to prepare once you have mastered the caramel. 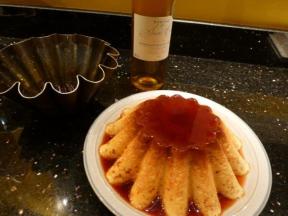 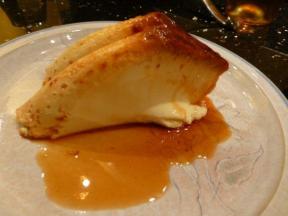 I took a piece of flan home with me, since there was too much for the three of us to eat at one meal.  I ate it a couple of days later, and felt that the flavour had improved.  If you are tempted to make this, do plan ahead and leave it to sit in the fridge for a few days, I would say up to four days is good.  I will certainly make it again!

And here is the video (e-mail subscribers, please visit the blog site to watch the video):