I’m sure you have eaten truffles – but did you eat chocolate truffles or black truffles? 🙂

The black truffle, also called Perigord truffle, French black truffle, or, to give the Latin name, tuber melanosporum, is a native European truffle, and it ranks very high on the list of the most expensive foods! 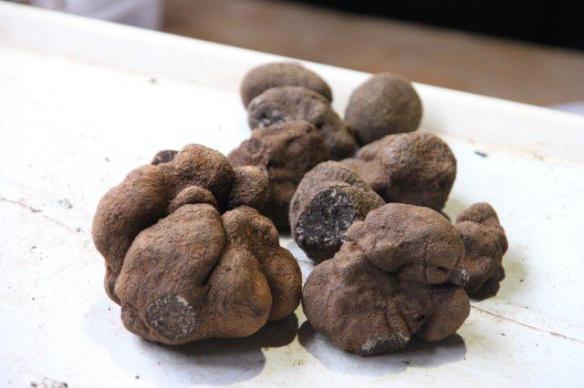 It’s been prized for its flavour since antiquity, and it was regularly served on the tables of princes, kings and emperors.  Towards the end of the 19th century, France produced up to 1000 tonnes of black truffles per year.  Prices were much lower then than they are now, and black truffles were used in great quantities in classic French cooking at that time.

Since the end of the 19th century, France’s truffle output has fallen dramatically – at times it has been as low as 20 tonnes a year!  A variety of causes have contributed to this fall in production: destruction during the 1st and 2nd world wars, deforestation, acid rain, general pollution, changes in farming methods, changes in climate…

For a very long time, the way truffles grew was not very well understood, but by the early 1970s a technique had been developed which allowed hazelnut and oak saplings to be inoculated with truffle spores.  The resulting trees could produce truffles four to eight years after planting, but the success still depends on many factors such as soil type, amount of rainfall, temperatures, etc.

Lucky for us, a good many of the truffle orchards which were planted in Southern France are now producing truffles.  If you visit Languedoc at this time of year, you are in for a treat, as truffle markets in the area take place throughout the winter months.  I’ve visited several of these markets over the years, and I have written about one of these visits here.

Below, I give you a list of the forthcoming markets in the area.  Even if you don’t buy any truffles, these markets are well worth visiting, I promise you!