During the summer months there are so many things going on in the area – it’s hard to keep up with it all, and harder still to write about it all at the time that it happens.  So some stories get put by for later, when it’s a little calmer, and when a reminder of summer is welcome.

The tourist office in Beziers had a full programme of guided visits during the summer.  I found time to go on one guided visit, which was a tour of the Arenes de Beziers, the arenas where the Feria, the annual bull fight festival, takes place each August.  This impressive building is located on Avenue Emile Claparede, a little way from the centre of town.

Bull fighting has a history in Beziers which pre-dates the opening of the arenas in 1897, no doubt having been introduced from Spain.  Before this present structure was opened, there had been a number of temporary and makeshift arenas in Beziers.  In the above picture you can see some of my fellow visitors, waiting for our guide to arrive.  At the time of my visit, the Feria had only recently taken place, so the posters were still all in place.

Once our guide had unlocked the enormous gates and let us in, he explained a little about the building.  The outside walls are made from stone and brick, and the internal structure for the tiers is made from reinforced concrete. The diameter of the building is 107 metres and it can seat up to 15,000 spectators.  With that information we set off to explore the building.

A number of plaques lined the corridor we walked along.  The first reminded us that from 1898 onwards several famous French composers created works under the impulse of Fernand Castelbon de Beauxhostes, a patron of the arts from Beziers. 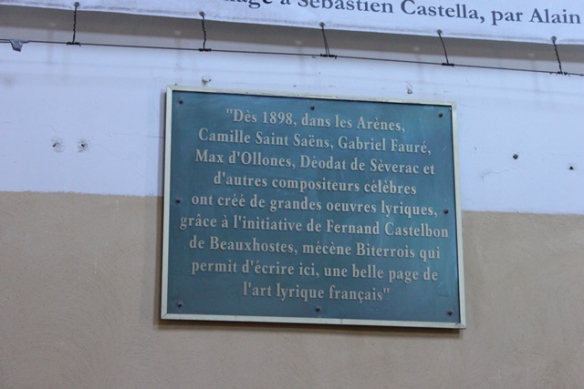 The symbols on the tiles are the branding marks of the various manades, the farms which raise the bulls. 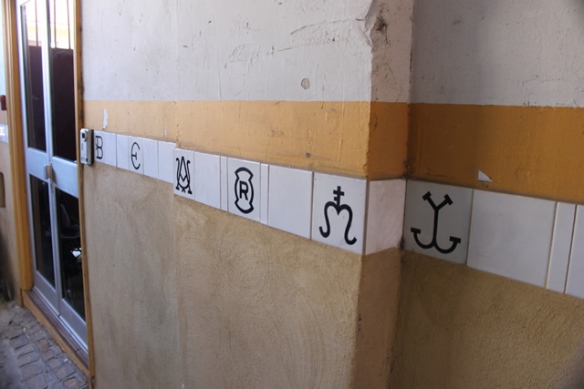 The plaque below commemorates a prize which had been awarded to the Guardiola ranch, for their bulls.

We finally came to the end of the tunnel, and into the light:

Standing inside this huge arena is awe-inspiring to say the least.  The pictures below don’t really manage to convey the sheer scale of the place!

We walked across the arena to the toril, where the bulls and the toreadors enter the ring.  Our guide took us behind the scenes!  Here’s a good look at the underside of the tiers:

This is what a changing room of one of the bull fighters looks like – stark and spartan:

Apparently there is also a chapel on site, where the fighters pray before going out into the arena, but we couldn’t see that.

Our guide explained that the arena is used throughout the year by the Beziers bull fighting club for training.  He showed us two contraptions used by the aspiring bull fighters to practice their skills.  The first is for working practising with the fabric, which does not have to be red, apparently it’s the movement of the fabric which irritates the bull. 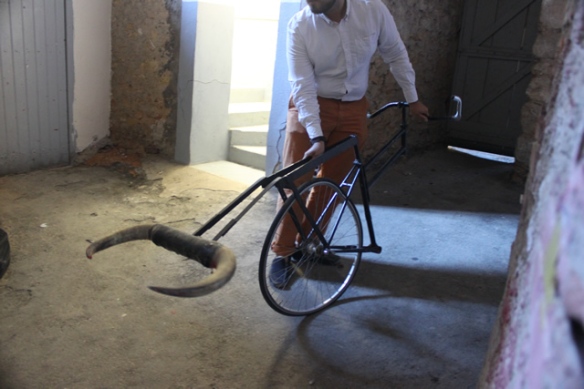 The second contraption is for practising with a wooden sword.

At that point our guide also explained a fundamental difference between the bulls used in the Corrida, and those used for the Course Camarguaise. The horns of the bulls which appear in the Corrida point forwards, at the toreador, whereas the Camarguaise bulls’ horns point upwards.  If you have been following this blog for some time you may remember my article about bull fighting in the Camargue.  If you want to read it, this link will take you there.

We then looked at the area where the bulls enter the arena, carefully separated from any other animals or humans.

On we went, to the platform above the toril, where an orchestra is usually placed to entertain the spectators in between fights.  From there I got a good picture of the prized seats, the boxes, right at the top of the arena. 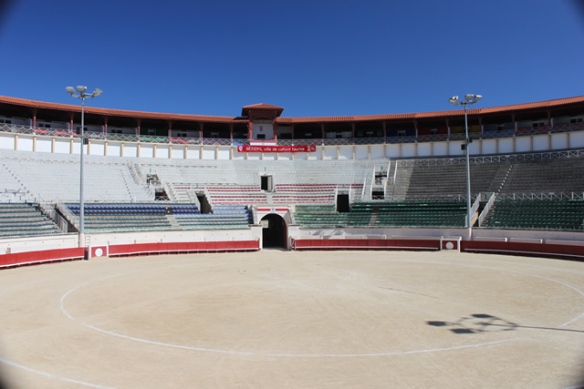 That’s where we were headed next, so we went down again, into the ring, and across to the other side.

The sign below indicated that we were going in the direction of the boxes.  Vomitoire is the name of the wide corridors, which allow lots of people to enter and exit quickly.  I imagine that the word has Latin roots!  And no, it’s not a place where the Romans would have vomited

The staircase up to the boxes was quite something, especially if you looked down from the top:

Finally, we had reached the boxes.  Our reward for climbing all those steps was a most amazing view:

The seating inside the boxes was not all that much more comfortable, but the big difference was cover and shade!!  A Corrida lasts two and a half hours, and in the blazing sun that could be uncomfortable!!

After a good look around the boxes, we descended the stairs and headed down some more corridors – it felt a little like being in a rabbit warren. 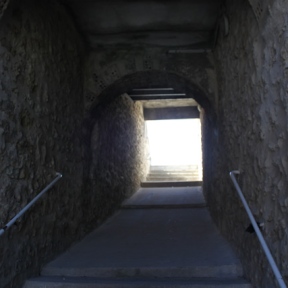 We emerged into the sunlight once more, and made our way to the very top of the arena.  Another great opportunity for a panorama shot!!

From the top we could see outside the arena, and the views of Beziers were amazing.  When the arena was first built, it would have been mostly surrounded by fields! 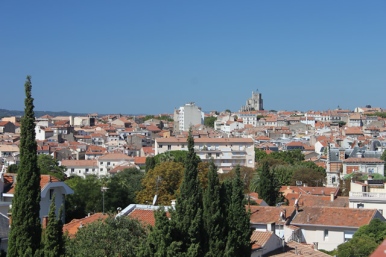 What about the bulls, you may ask.  In a Corrida the bulls always come to a sticky end. Each fight lasts for 15 minutes, and at the end of it the bull is usually dead.  I must admit that I have a difficult time with the idea of killing as a sport or an art, but I respect other people’s views on that.

Now, going back to the composers that I mentioned earlier and the patron of the arts, Fernand Castelbon de Beauxhostes, there is a period in the history of the arenas, when they were famous for other things apart from bull fighting!  Beauxhostes realised very early on that the acoustics inside the arena were superb, and ideal for outdoor opera!  He persuaded his friend Camille Saint-Saëns (remember the Carnival of the Animals?) to cooperate.  Legend has it that Saint-Saëns was totally against bull fights, and that he was only persuaded to participate after having listened to the acoustics whilst wearing a blindfold, thus not knowing where he was.  Whatever the truth, in 1898 Saint-Saëns premiered the precursor to his opera Dejanire in Bezier.  This marked the start of a very successful opera festival, which took place annually until 1929, and for which people travelled from all over France. 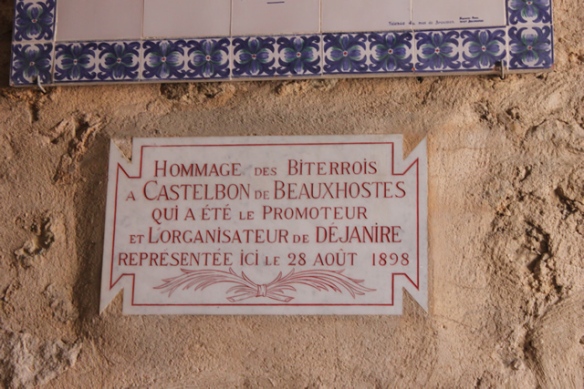