… that’s how James Bond liked his martinis!  A classic martini cocktail has only two ingredients – that’s if you don’t count the olive!  Gin and dry vermouth, in the proportion of 6 parts gin to 1 part dry vermouth, make up a dry martini, according to the International Bartenders Association (IBA).

The town of Marseillan, on the Etang de Thau, is the home of Noilly Prat, a company which has been producing dry vermouth since its foundation by Joseph Noilly in 1813.  Purists say that it’s that dry vermouth that should be used to make the perfect dry martini cocktail! 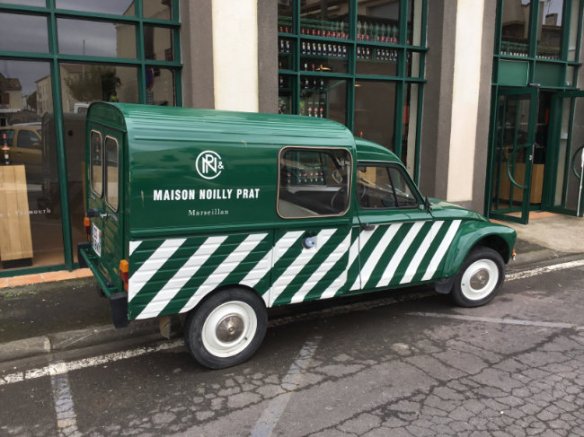 In 1843, a new branch of the business was opened in Marseille.  The man in charge of that new business was named Claude Prat.  The following year, Claude Prat married Anne Rosine, the daughter of Louis Noilly.  In 1855, Claude Prat became an associate of Louis Noilly and the company’s name was changed to Noilly Prat & Companie.  Between 1859 and 1862, a new production facility was constructed in Marseillan, for the ageing of wines.  I’ll come back to the ageing of the wine in a moment.

By 1865, Louis Noilly and Claude Prat had both died and Anne Roisine was at the helm of Noilly Prat, ushering in a period of expansion and prosperity for the business.  In 1878, the Noilly Prat vermouth was awarded a gold medal at the Universal Exhibition in Paris – a very high honour indeed!!

Anne Rosine Prat-Noilly was one of the few women who were running large and successful businesses in the 19th century.  The only other one I can think of right now is Barbe-Nicole Clicquot, the Veuve Clicquot of the famous champagne house, but I’m sure that there were others.

Anne Rosine was succeeded by her sons Louis and Jean Prat-Noilly in 1902, and in 1928 the company structure was changed to that of a PLC, a public limited company.  Information exists on the year 1939, which shows that the Chairman of the Board was a granddaughter of Anne Rosine.

Now that I’ve told you about the history of the company, we can get back to visiting the production site in Marseillan.  I’ve visited Noilly Prat many times over the years, and the guided visits are constantly evolving and becoming better organized.  The visitor’s reception area is located in a large, spacious hall, with the shop at one end and the ticket desk at the other end.  Old (and now unused) equipment is used for decoration.

Did you notice the green doors in the upper picture above?  The lettering translates to “Behind these doors the first French vermouth is being made”!  The doors were opened with great flourish by our guide and an assistant, to reveal the Chai des Mistelles, the cellar where the mistelle wines are stored. 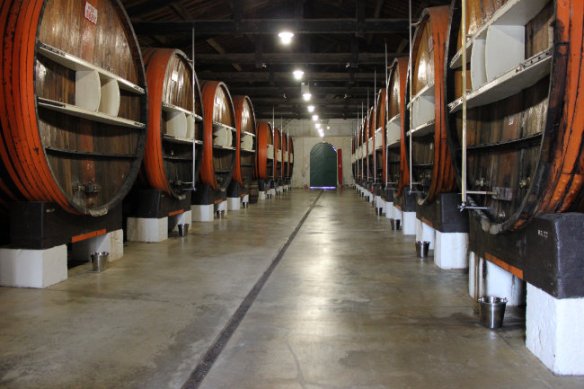 Huge oak casks line the cellar down both sides.  Louis Noilly had them built in 1859 – they were made from Canadian oak, and they have been in use ever since!  I’d never come across the word mistelle before my visits to Noilly Prat.  Apparently, this is lightly fermented grape juice, to which neutral alcohol has been added, to avoid it turning into vinegar.  This process leaves residual sugars in the wine, and that adds a little sweetness to the vermouth.

I mentioned earlier that the site in Marseillan was intended for the ageing of wines.  In the days before modern transport appeared, wines were sent by boat, with the barrels often tied up on the decks of ships.  The barrels and their wines were exposed to sun, wind, rain, mists and sea air.  On longer journeys, this produced oxidation in the wine, which gave it a taste all of its own.  Louis Noilly wanted to recreate some of this taste for his vermouth, and chose Marseillan since it was close to the sea.

From the Chai des Mistelles we stepped out into an enclosed yard, where hundreds of oak barrels were out in the open air, exposed to the elements.  The sun beats down on them in summer, the sea mists impart an imperceptible flavour, and the temperature changes throughout the year affect the ageing of the wine.  Seeing all those barrels lined up was a spectacular sight!!

The picture below is from one of my earlier visits to Noilly Prat – I think it was in 2004, when visitors were still allowed into the modern vermoutherie, where the wines are blended and flavoured with aromatics.  That part of the site is now out-of-bounds for visitors, unfortunately. 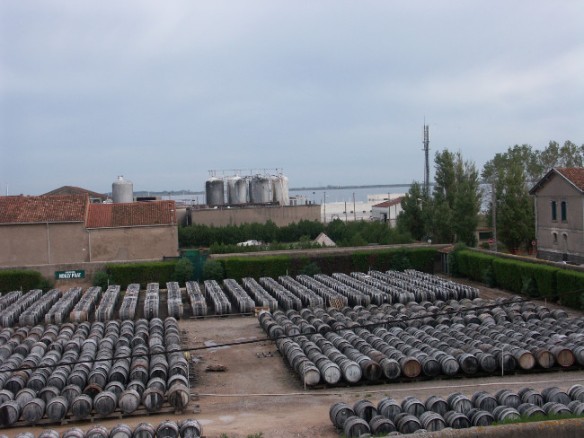 The barrels come from many different parts – they are bought once they have been used for a good 10 years, some for the production of whisky and cognac, others from port and wine makers.  They are used purely for storage and ageing – because they are second-hand, none of the tannins and flavours from the wood will be imparted to the wine.  A cooperage workshop on-site maintains and repairs the barrels – being outside in all weathers means that they need some TLC from time to time!

Our next stop was the museum, where the history of the company and its vermouth were illustrated.

To turn wine into vermouth, it is infused with a blend of herbs and spices.  The recipe for the original dry vermouth has not changed since Joseph Noilly first developed it, and the ingredients are still bought all over the world!  To ship them, in the days when shipping meant only transport by boat, special cardboard containers were developed.

The recipes for the herbal blends which flavour the vermouth, are closely guarded secrets.  However, in the museum we got to see approximately what is added: 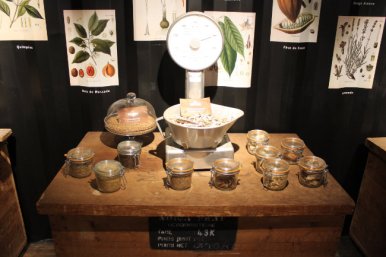 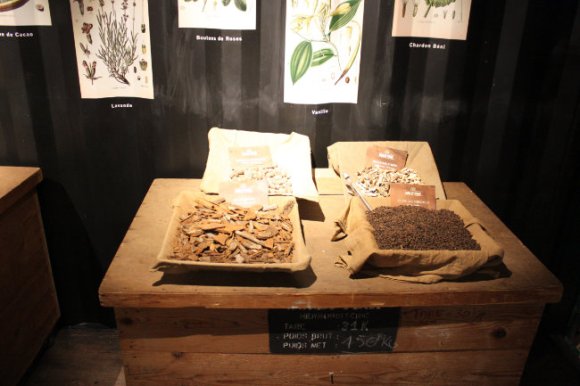 Noilly Prat produces four different kinds of vermouth:  original dry, extra dry, red, and amber.  The pictures below show a simplified version of the recipe – not everything is listed.  Our guide told us that 27 different aromatics are used in the composition of the amber vermouth.

Here are their displays showing the differences in ingredients in their different vermouths. 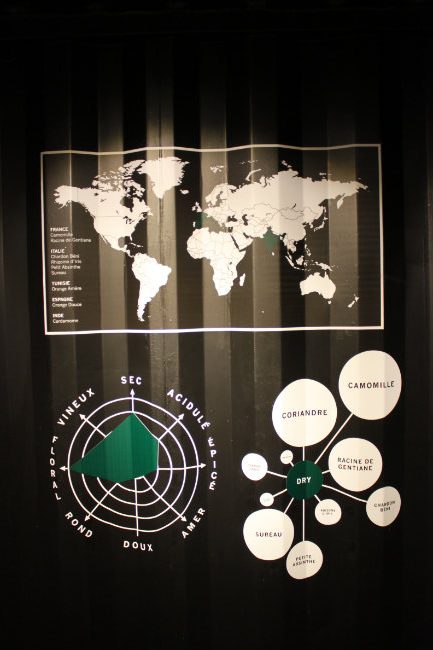 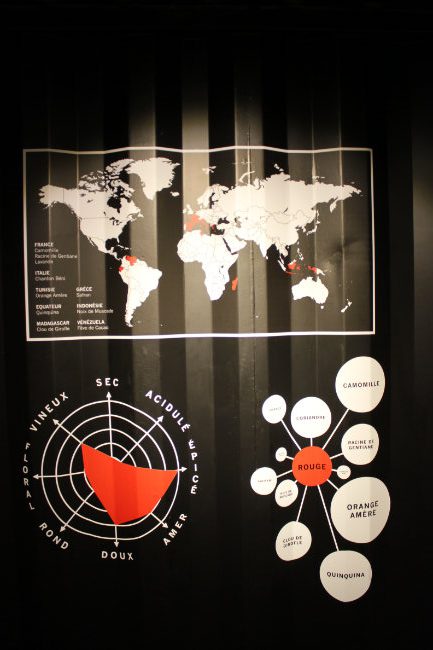 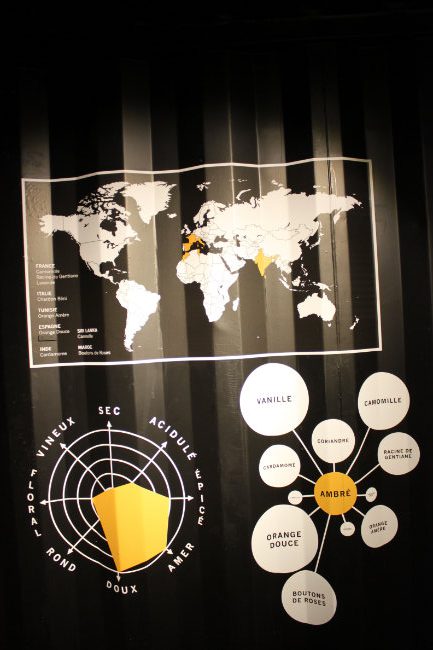 Once the wines have been carefully aged and blended, a mixture of herbs and spices is added, and the wine is left to macerate with the aromatics for 21 days.  This maceration is done in casks like the ones in the following picture – 14 kilos of dried herbs and spices are added to each cask! 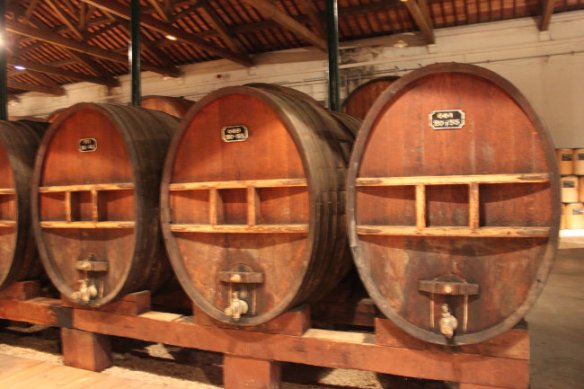 During the 21 days, the wines are stirred  by hand for three minutes every morning, to ensure that the herbs and spices infuse evenly.  A special tool was developed for that purpose.  You can see it in the picture below:

The curved blade at the end of the handle allows the cellar man to lift the herbs which have fallen to the bottom of the cask.  After the 21 days, the wine is strained and decanted into large refrigerated tanks, where all small particles settle to the bottom over a period of time, leaving the vermouth sparkling clear!  Finally, the finished vermouth is transported to Beaucaire by tanker, where it is bottled.

The last stop on our guided visit was the tasting bar – our appetites had been whetted, and finally it was time to taste the results of all that work! 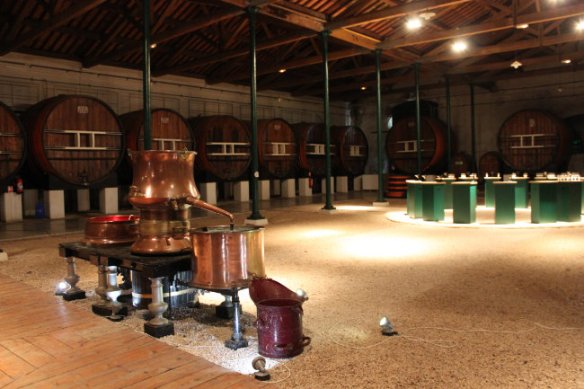 Our guide poured samples of the four different vermouths for us to taste, starting with extra dry, then original dry, followed by the red, and finally the amber. 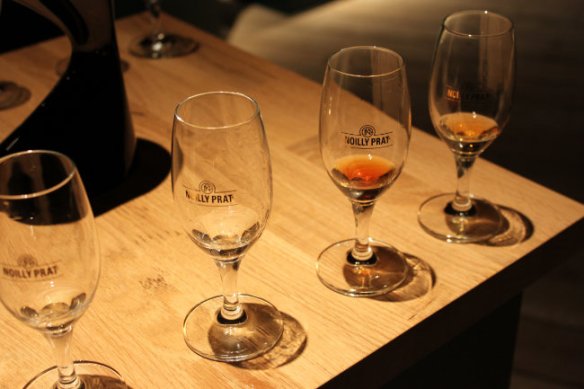 The original dry is exported all over the world, the extra dry is sold mostly in anglophone countries, the red is sold only outside of France, and the amber is only available in Marseillan!  All four taste very different, and I’m not entirely certain which one I prefer.

Following our introduction to the four Noilly Prat vermouths, our guide took us to the room next door, the so-called cocktail bar! 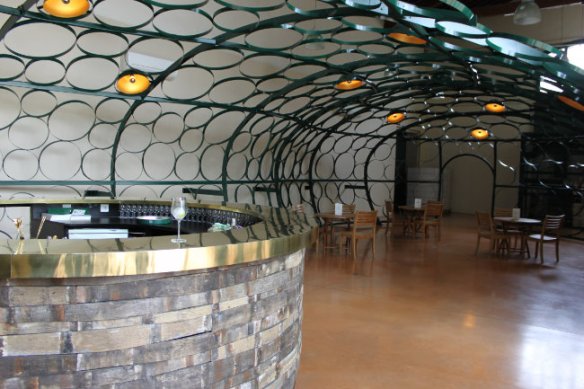 Large glasses were lined up on the shiny brass top of the bar, and into each glass our guide dropped an ice ball.  Yes, an ice ball!!  Apparently this takes 40 minutes to melt and is therefore far superior to ice cubes!!  Guess what? The moulds were for sale in the shop, and of course I bought one!!  🙂

Everyone could pick their favourite vermouth, and our guide prepared them as follows:

Adding the citrus zest and the ice brought out completely different flavours in the vermouth – it was somewhat of a revelation for me!

We’d come to the end of our visit, next stop the shop, where I bought a bottle of each of the four vermouths as well as the ice ball mould – it was too good an opportunity to miss!  Enjoy – but please remember to drink responsibly! 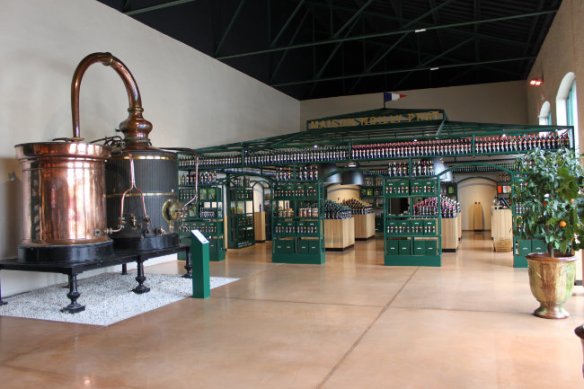 To find out more and/or to book a guided tour, visit https://www.noillyprat.com