Florence Nash has very kindly written another post for this blog!  I’ve lived in Saint-Chinian for so long that I take the sounds around me for granted, and as such I don’t really pay attention to them any more.  So it’s wonderful to be reminded of those particular sounds which make living in a village (as opposed to a town/city) so very special – thank you, Florence!!

I usually arrive in Saint-Chinian, at the end of August or early September, as a refugee from the sweaty, buggy, late-summer slump of the southern United States, where people dash from one air-tight, air-conditioned haven to the next. Maybe that’s why one of my favorite images of this many-splendored place is a surprisingly modest one: My waking view of dawn lighting the red roof tiles outside the wide-open casement window, and the curtain sheers, dotted with little Fleurs de Lys, stirring slightly in air just cool enough to require a blanket. This air is sooo delicious! And virtually bug-free, with the sky criss-crossed by swallows (or martins, or swifts — I never can tell the difference) swooping and darting helpfully after their airborne breakfast. I wouldn’t dream of closing these windows at night, even if it were to take three blankets.

That may explain how I have become so conscious of the voice of Saint-Chinian, the particular texture of sounds human and otherwise that seems almost a sonic portrait of the village. Especially in early morning as the village wakens, but throughout the day as well, I find myself listening for and collecting its distinctive sounds.

To begin with, there’s the town clock that rings each hour and then, just to make sure everybody gets it right, does it again. The local doves join the daily aubade with their soft hoo, hoo-hooo. (One morning a few years ago I heard gunshots blasting through their peaceful calls. To my relief, it turned out to be someone chasing marauding boars out of his vineyards; they have a destructive enthusiasm for ripe grapes.) As the sun climbs, there’s the creak and clack of shutters being opened and secured and, on Thursdays and Sundays, the thrum of van engines as marchands converge on the market square and set up their stalls, calling and clattering and laughing. Plenty of dogs are quick to voice their territorial imperatives — there’s some indignant barking under my window as I write.

I’m renting Acanthus, as usual, the house occupying the two stories over Andreas and Anthony’s headquarters on Rue Cours La Reine, and throughout the day I hear the companionable murmur of many a conversation — in French, English, German, and who knows what — below my windows as friends stop by for a word. The mail carrier on her rounds usually has time for a little chat, too.  This street is one of the few actually wide enough for two passing cars and even a bit of parking. But just in back, and all around, there are “streets” you’d swear a car could never fit through — until you find yourself leaping frantically into a doorway and mashing yourself against the wall as one squeezes past with a few inches (really!) to spare, rear-view mirror practically snatching at the market basket clasped to your bosom. These tiny streets, separating dwellings by only a few yards, are one of the factors contributing to what amounts to a village-wide conversation; that, along with the fact that every sound reverberates full force off these ancient stones. One morning as I lay in bed savoring the rising light and the twitter of birds, I heard the clear ting ting of a teaspoon against a coffee cup in someone’s kitchen across the way. It was extremely intimate, somehow. 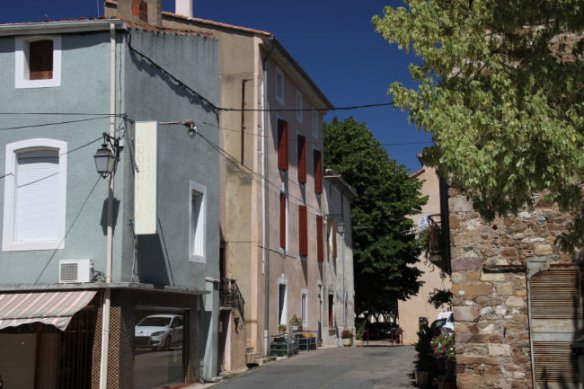 To be fair, I have to mention the occasional roar and clatter of huge trucks that shoulder their way along the main drag, momentarily challenging conversation under the trees at Le Balcon, and Vernazobre, and the Café de la Paix. They’re not my favorite noise, but they are part of the real life of all these old villages now strung like beads along a narrow, busy trucking route. I’ve come to love Saint-Chinian because it’s not a Hollywood-glamorous South of France destination, but an ancient town in a surrounding of dramatic beauty — and equally dramatic history — where people work hard and live in close community, mostly either making wine or providing services for those who do. And, for my money, instead of seeing famous beauties in full make-up and stage lighting, I find it a lot more interesting — and  privileged — to get to know what they’re like after a hard day’s work, or first thing in the morning! 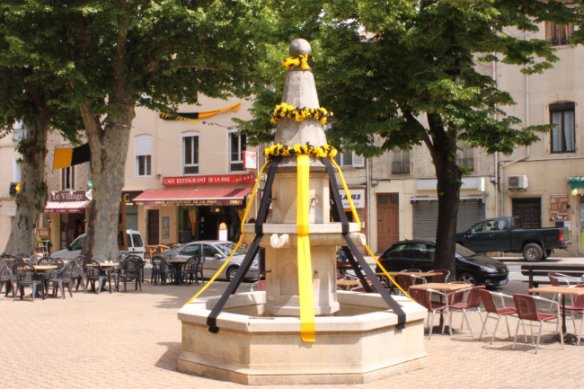 Speaking of working, I have to share with you one more little item in Saint-Chinian’s voice. The other day I drove up behind the Cave Cooperative to have a look at Domaine La Madura’s new winery, built since I was last here by my friends Nadia and Cyril. On the way up I spotted Nadia out talking with the pickers, so we only exchanged a hasty wave. At the winery, though, I found Cyril in rubber boots hosing off a concrete floor, the air tinged with new fermentation. He showed me around the sleek, modern building crowning the hill (and uncannily harmonious with the landscape): lab, tasting room, sales area, offices. We entered a low-ceilinged space filled with solemn rows of large, apparently identical barrels; but each bore its own markings: contents, origins, age; each had a personal history of weather and work and worry. The room felt like a kind of chapel of wine. Cyril removed the bung from one of the barrels nearby and said, “Come listen. You can hear the wine working.” I put my ear down close to the bung hole, held my breath . . . and there it was, faint but steady. Sssshhhh. Just like holding a seashell to your ear to hear the ocean, hundreds of miles from the coast. The voice of the wine! Delicate and astonishing and new, this voice of Saint-Chinian is now, without doubt, my undisputed favorite.

Before I sign off, just one or two more words about the pleasures of driving in the Languedoc countryside. Because every road wriggles and squeezes through village after village —often without room for two cars to pass and always with two or three badly parked vans in the way— drivers encounter over and over the need to slow down, calculate relative maneuvering ease, and cede right-of-way in the most practical direction. This is accomplished fluidly, quickly, and without fuss by the great majority of drivers I’ve encountered, in a sort of car-ballet of accommodation. It makes me feel better about human behavior. It makes me feel less good about driving in the US. Lastly, my very favorite road sign in all of France is the one that says “TOUTES DIRECTIONS.” No message could be more welcome or more comforting than this, to us strangers wandering in a strange land: “Wherever it is you are trying to go, friend, you are — so far — on the right road!”