In last week’s post, I hinted at my visit to two wineries.  My first stop that afternoon, following the morning’s wine tasting, discussed last week, was at the cooperative winery in Saint-Chinian.  I had come not to taste wine, but to look at the “Art en Cave” – enormous works of art which are painted on the fronts of the wine tanks in the cellar.  The project started in 2013 and since then at least one new painting has been commissioned each year. 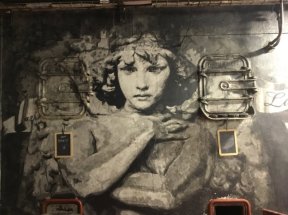 Each year a new cuvee is created in tandem with the new artwork.  The wine is issued in a limited edition, with the painting featured on the label of the bottle. 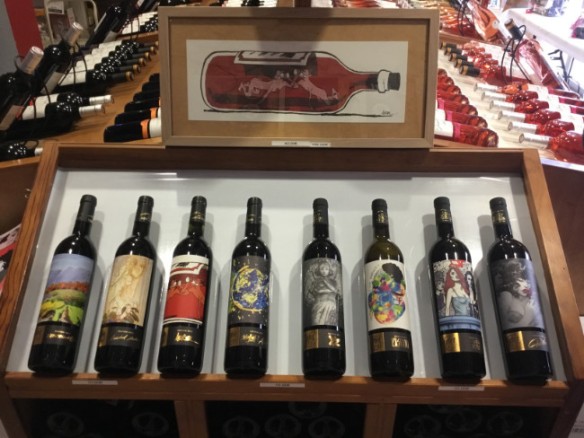 When the project was first started, it was a unique concept.  “Art en Cave” is now a registered trademark!

After my visit to the cooperative winery, I went on to say hello to my friends Nadia and Cyril Bourgne at Domaine la Madura.  For the occasion of the winery open day, they had decided to pair visual arts with their wine.  I enjoyed the paintings of Stéphane Villafane as much as I enjoyed the wines of Domaine La Madura!!

This will be my last post this year – I’m going to take a break for the holidays.  So, here is my Christmas present to you: my recipe for mulled wine!  I recently made a large quantity of mulled wine for a Christmas concert in Saint-Chinian.  The lucky visitors went through 15 litres of it! 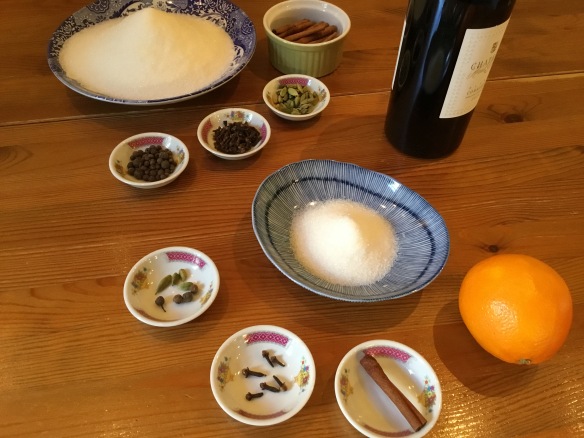 It’s not necessary to use an expensive wine for this recipe, but if you use a decent quality wine you’ll end up with great mulled wine.  The secret is to ensure that it does not get too hot – use a sugar or yoghurt thermometer if you have one.

If you want to make a non-alcoholic version, substitute red grape juice or a mixture of grape and apple juice for the red wine, add the juice of the orange and omit the sugar.

Leftover mulled wine can be bottled and kept for several days.  Reheat gently

Happy Holidays to you and yours!

A couple of weeks ago, I mentioned that a number of wineries in the Saint-Chinian area were having an open day on December 8, 2018.  In order to bring you a blog post, I had to go on a research trip! 🙂

I had come to the Maison des Vins for a tutored tasting of some of the wines which had made the Virtuoses selection of wines from the AOC Saint-Chinian.  There were 11 participants to the session, which was led by Baptiste Poncet from the Maison des Vins and Vivien Roussignol of Domaine des Paissels.  We were led up an amazing and monumental staircase to the tasting room on the first floor.  Here was the room where pretty much every wine in the store below had at one time or other been tasted, to see if it measured up to the strict quality criteria of the AOC Saint-Chinian.  The room was packed with rows of tables.  Several tasting stations were built into each row, with each person having their own small basin and cold water tap!

The Virtuoses competition is specific to the Saint-Chinian wine area.  It was first held in 2014.  The competition is judged by panels of journalists, professionals and personalities in the wine trade, restaurateurs, etc.  Over the years it has been held in different locations (Saint-Chinian, New York, Montreal, London).

The entrance criteria are fairly strict, and winemakers have to enter three different vintages of the same cuvee.  The idea behind that is to show the ageing potential of the wines.  For this year’s selection (2019), 70 winemakers entered their wines, which were tasted by the 25 jury members in New York City.  Before you ask, no, the jury members didn’t have to taste each and every wine!  They were split into groups as were the wines – it would be nigh impossible for all but the most experienced tasters to work their way through over 200 different wines!!

For our little tasting, Baptiste and Vivien had selected the following wines:

Before we got to tasting all those wines, a little surprise had been prepared for us.  If you saw the picture of the tasting stations earlier in this post, you may have noticed three bottles standing next to one of the sinks.  There were four such sets of bottles dotted about the tasting area, each set contained bottles labeled with Syrah, Carignan and Grenache.  Vivien had brought these wines with him.  They had only recently finished their fermentation and had been drawn off the tanks just the day before.  The idea was that we would create our own blended wine with wines made from the three grape varieties that are frequently used for the AOC Saint-Chinian wines! 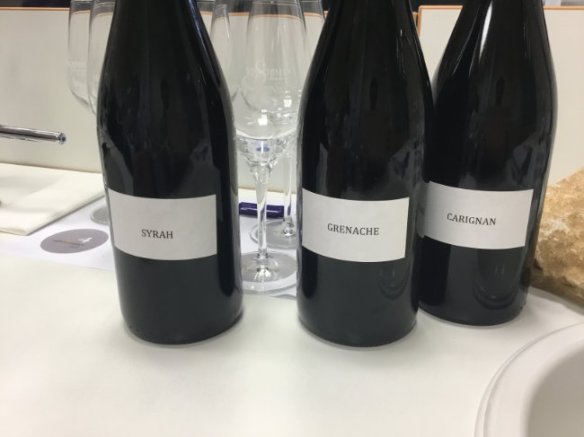 Four teams were formed, and we were given the requisite tools for blending, namely a measuring jug and an empty bottle for our final blend.  We started by tasting the individual wines.  The Syrah had spent some time in oak barrels and was to add “structure” to the wine, the Grenache was for roundness, and the Carignan was for freshness.  The colour of all three wines was amazing – a deep purple colour verging on black!  This is where my multitasking ended – tasting and photographing do not go together, at least not for me! 🙂

Once we had finished tasting the three different varietal wines, we set about working out a “recipe” for our blend.  We started with 30% Syrah, 60% Grenache and 10% Carignan.  Next we tried 20% Syrah, 50% Grenache and 30% Carignan.  Finally we tried 30% Syrah, 40% Grenache and 30% Carignan.  We tasted each of these blends in comparison to one another, and yes we did keep track of our glasses!!  A sheet of paper had been placed at each station, with number 1 to 6 printed on it!!  We came to the conclusion that our winning blend was the 20-50-30 one and prepared our full bottle according to that recipe.

Each group submitted their bottle, which was then covered with a sleeve, and then we all did a blind tasting of the four different blended wines.  Baptiste had given us a simplified version of the tasting sheets used for the Virtuoses competition.

The wines had to be rated on appearance, i.e. colour and clarity of the wine, intensity and complexity of the “nose”, followed by various criteria of taste: Intensity/concentration/bouquet/complexity, acidity/freshness, tannins/structure, balance/harmony, “length” in the mouth, followed by an overall note.  Each note carried points and, as you can see, I rated the wine named “B” at 13.5 out of 20 points.  I found that exercise to be incredibly difficult.  Tasting all those wines was tough enough, but giving notes was tougher yet.  Added to that was the fact that the wines were very young, and the flavours not yet very developed.

Did “our” blend come out with the highest score??  Nope, it came in last, but in our defence it was the first wine to be tasted, which, as Baptiste said, does nothing for the ranking.  The winning formula was not too dissimilar to ours though: it consisted of 30% Syrah, 50% Grenache and 20% Carignan.

Vivian told us that he prepares about 3 different blends for a cuvee before he arrives at the final “recipe”.  Sometimes, final adjustments are made to the blend just before a wine is bottled.

Being a vigneron is a highly skilled job AND it requires many different skills: growing the grapes, turning them into drinkable wine, blending the wine, and finally selling the wine!  Before this tasting, I had no idea of just how the blending of a wine works – now I know just how much work and skill is involved, and I hope you, also, have learned a lot about all of the work, skills and abilities that are necessary to create a wonderful wine.!

Thank you to Baptiste and Vivien for this great experience!

After all the excitement of the blending, we tasted some of the winning wines, which Baptiste had selected for us from the Virtuoses competition.  I stopped taking notes after the first wine, which was cuvee bois jolie from Chateau Coujan in Murviel-les-Beziers.  This was my favourite wine in that selection, wonderfully round, with a lovely “nose” of honey and pear (not literally, only notes of !! 🙂 ) and a great taste!  Of the reds, my favourite was Domaine Cathala’s cuvee A.

With the exceptions of the three wines used in the blending, you can buy all other wines mentioned in this article at the Maison des Vins or via their on-line shop.

After a late lunch (the session took longer than planned – no complaints though!) I went on to visit the cooperative winery in Saint-Chinian and then to Domaine La Madura.  More about this in a future post perhaps.