I wrote in a previous post that Beziers had a camel (or more accurately a dromedary) as its totem animal.  So, how did the camel arrive in Beziers?  Apparently with Saint Aphrodise, Beziers’ first bishop. The legend has it that Aphrodise was from Heliopolis and met the holy family on their flight to Egypt.  He converted to Christianity after the crucifixion of Christ and decided to spread the gospel in Roman Gaul. His mode of transport?  Not Ryanair, but the camel, perhaps the Ryanair of its time?

He settled in Beziers, where he was eventually condemned to death by the governor for his overzealous proselytising.  After he was beheaded his head was thrown in a nearby well.  But, miracle of miracles, it didn’t sink and the water rose right to the brim of the well, bearing the head.  Now, you have to stretch your imagination a little more:  St Aphrodise reached in and picked up his head, and walked back to the cave where he withdrew from the world.  Along the way locals put snails in his path (why??) which he did walk over but did not crush.  Along the way a group of stonemasons were making fun of him, but god punished them and turned them into stone.  The camel was adopted by a potter.

I can just imagine you thinking “where is he going with all that?”  Well, in Beziers there is a church dedicated to St Aphrodise, and for years I’ve been trying to visit it.  Each time it was locked up and I could not find out when it might be open.  Then I came across the programme for the Fete de St Aphrodise, which advertised guided visits of the church and the crypt.  The cave which St Aphrodise withdrew to is now the crypt of the church, allegedly. 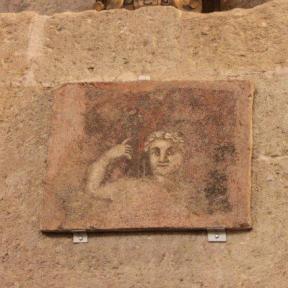 I got there for 12.30, just in time for the last visit.  From the outside the church is only partially visible, most of its perimeter has been built up, and the only access is currently via the small square on the south side.  What is visible is impressive – a large square bell tower looms over the square and the stone walls are incredible.  Up some steps to get to the entrance.  We were ushered into a chapel to the left of the door, where we waited for our guide.  The chapel had been beautifully restored, and I got the feeling that the visit would be interesting.  Our guide introduced himself as having worked for the archaeological department of the town of Beziers until his retirement, so he was familiar with several aspects of the church.  He explained that there are two parts to the present building – the Romanesque nave and the 14th century choir and apse.  The chapel we were standing in was in the base of the 14th century tower, and during work on the stairs it was discovered that there was a room below the chapel.  Indications showed that this room had been used for black masses – the priest at the time was not happy with that discovery!  We went past that staircase and into the choir by a small door.  Only a little light filtered through the stained glass windows of the apse, there was no light and our guide had only a small torch. 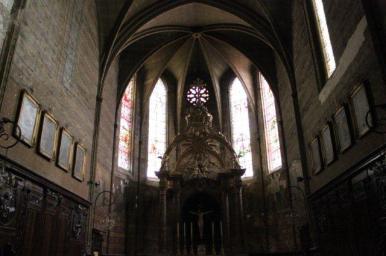 The first impression was wow – a huge space, which had a totally abandoned feel.  And it turned out that was exactly what had happened.  As the population of the centre of Beziers dwindled, the congregation of St Aphrodise slowly declined to the point where the parish was no longer viable, and the church shut up.  The church buildings belong to the French state, and of course there is very little money to maintain the thousands of churches, cathedrals and chapels all over France.  An association was formed, the Friends of St Aphrodise, with the aim of protecting the cultural heritage of that church.  And there is a lot which needs protecting.  The interior of the church was remodelled at some point in the 18th century, with a beautiful baldachin added over the main altar.  At that time someone decided that it would be a good idea to unify the appearance of the Romanesque nave and the gothic choir by adding a vaulted ceiling in the nave.  Unfortunately the Romanesque walls of the nave had not been designed to carry that kind of weight and over the centuries they have been shifting outwards ever so slightly, to the point where it became too dangerous to enter that part of the building.  In the 1920’s someone had the idea to repaint the interior of the church – at that point a lot of the original 14th century paintings were still intact.  It seems that what was there was scraped off and plastered over, not much left to uncover, unfortunately.  So what our guide showed us was essentially the choir and apse – beautifully panelled walls with choir stalls along the walls.  Apparently one bishop sold them to Abbey of Cassan near Beziers, and another one bought them back one hundred and fifty years later.  Behind the main altar is a chapel which houses a strange display case.  All kinds of bone and other things in an enormous reliquary.  On the walls either side are marble plaques, detailing the treasures which the church owned.  Makes fascinating reading, but I would imagine that most of it has disappeared. 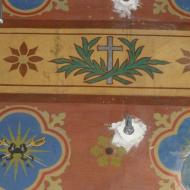 The painting in the chapel has disappeared, leaving a gaping hole and the view of the original 14th century walls behind.  Then we went into the sacristy – and that’s where it really felt like the Marie Celeste.  All sorts of paraphernalia were stacked up and standing about, including lots of paintings, all of them in dire need of restoration.  Our guide then allowed us a glimpse of the nave, and explained that the end had been excavated and found to contain a large number of gallo-roman sarcophagi.  In fact the whole area around the church was a vast necropolis. 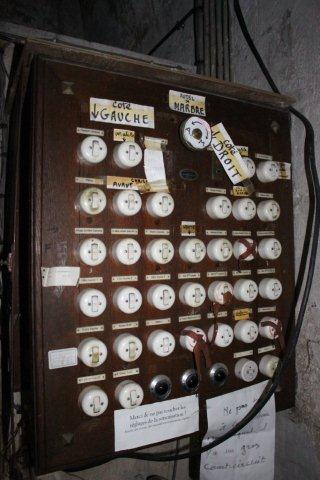 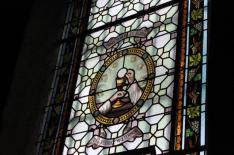 Then it was time to go down to the crypt.  A wooden ceiling was protecting the visitors from the possibility of falling stones, and the access was down a small staircase.  Again, there was no light, only our guide’s torch to show us what there was. 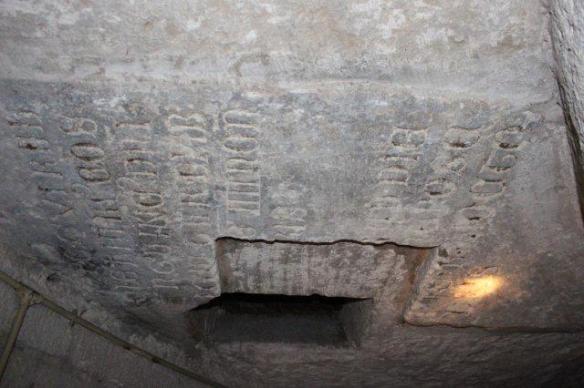 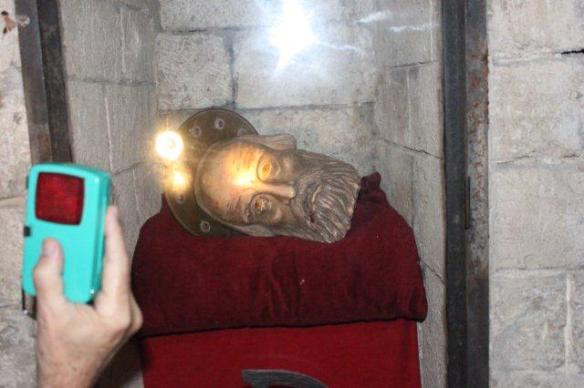 Our guide suspected that the crypt had been extensively reworked over the centuries.  There were brick walls visible through small windows but they could not have been put up from within the crypt.  Then there were the stone slabs which formed the ceiling, which had all been tombstones – an early form of recycling!  On some of them the inscriptions were still quite visible.  As we went round the crypt there was a rather gruesome representation of St Aphrodise’s head, and then it was up the steps and out towards the entrance.  The stained glass window was beautiful (most of the stained glass in the church is 19th century) and the restored part gave a good idea of what the church could look like once fully restored.

This visit was the very last one to the church in its present state – what a lucky coincidence.  Work is due to start later in the year to consolidate the building and make it safe.  Then the real work of restoration will have to begin, and so will the fundraising!  I hope you’ve enjoyed this historic visit!!

12 thoughts on “Saints and Camels”